Fancy getting behind the wheel of a luxury sports car that offers a bit more “Yeehaw” to your ride? The Ford Mustang is undeniably one of the most iconic American sports cars around and it’s received a redesign for 2019…

The "Stang" is a great muscle car, a real Hollywood icon and a true American motoring legend that’s been around since the mid-1960’s. Re-introduced in spring of 2015 and has officially received over 40,000 sales since moving onto our side of the pond from the U.S; now Ford have released an updated version and it looks and drives better than ever before!

The facelifted Mustang comes with a choice of new gearboxes; has improved exterior and interior styling; revamped and retuned suspension; extra performance; more safety and driver aid features. The Mustang offers you a lot of car for your buck, and stands out against key competitors such as the Audi A5 Coupe, BMW 4 Series, Mercedes C-Class Coupe, Infiniti Q60 and Lexus RC.

There are 2 models to choose from in the Mustang range. The standard Ecoboost model is no slouch on the road; It uses a 2.3-litre four-cylinder turbocharged Ecoboost petrol engine with 317hp, which is similar to the engine in the Focus RS. If you want a car with a bit more oomph and roars loud enough to make heads turn, then there’s only one option for you: the V8 GT model with 450hp. The 2.3 Ecoboost engine races to 62mph in 5.8 seconds, while the more powerful and more noisier 5.0-litre V8 beats that’s time in 4.8 seconds. Despite being a second slower than the V8 model, the Ecoboost model returns a slightly better combined fuel-economy than the V8’s official 32.1mpg. With both engines, you can have either a smooth and responsive six-speed manual or a sophisticated 10-speed automatic gearbox.

A classic special-edition Mustang Bullitt model sits at the top of the range, however, there have been Bullitt Mustang specials built before, in 2001 and 2008 – and like both models, it’s influenced by the car that featured in Peter Yates’ 1968 cinema classic of the same name. Ford says, the Bullitt Mustang has been designed to celebrate the anniversary of that famous car-chase film. The Ford Mustang is available in 2-door fastback hard-top and 2-door convertible soft-top body styles. 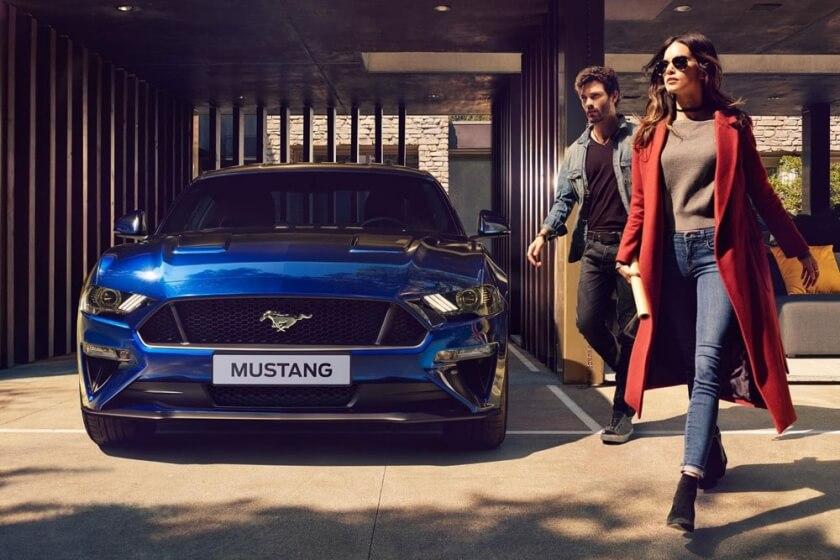 Examples of key features found at each trim level can be seen via the table below;

The handling in both the Ecoboost and V8 models has improved significantly, too, it’s now able to go around sharp corners or bends at ease using its standard front and rear suspension. That said, buyers can also opt for Ford’s optional adaptive MagneRide suspension if they want their Mustang to go just that one step further when tackling corners and improving comfort when on track or rough-terrain. This system monitors and adjusts itself thousands of times per second to deliver maximum stability, comfort and control. The 4 driving modes on the gear selector through which the driver can tailor to suit the road conditions and the style of driving are: Normal, Sport, Track and Drag.

Interior and technology features of the Ford Mustang

On the inside of the Ford Mustang, there’s plenty of technology and functionality for drivers to excited about! Driver’s will get a standard 8.0-inch colour touchscreen that’s extremely responsive and intuitive. The pinch-and-swipe gestures found on smartphones and tablets enables users to navigate more easily. 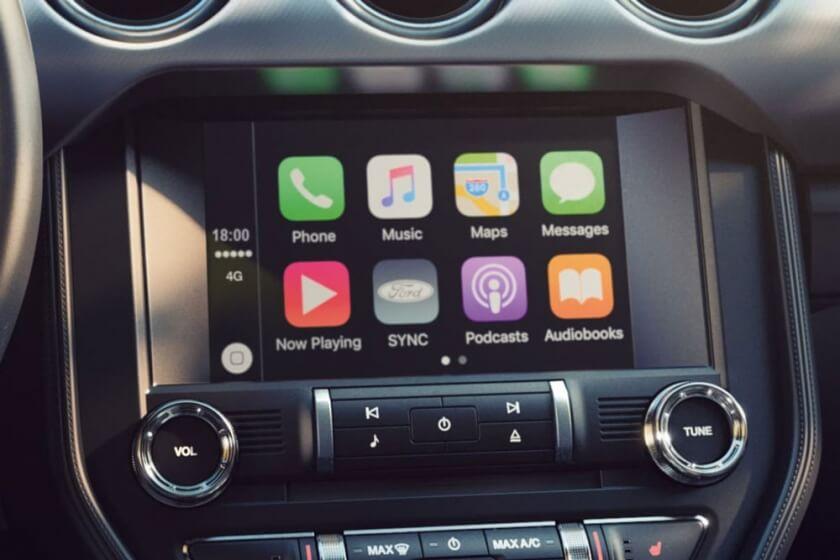 There is a 12-inch LCD instrument cluster that sits behind the steering wheel and can even change its theme/appearance to suit the driver mode, making it easier for the driver to know which mode is selected when driving. The Track Apps is also a very useful feature that most drivers will be keen to use. This technology comes as standard and displays useful real-time performance information on the LCD screen to help you achieve the best performance our of your car. Sat-nav, Apple-CarPlay, AppleLink and Android Auto all come as standard. 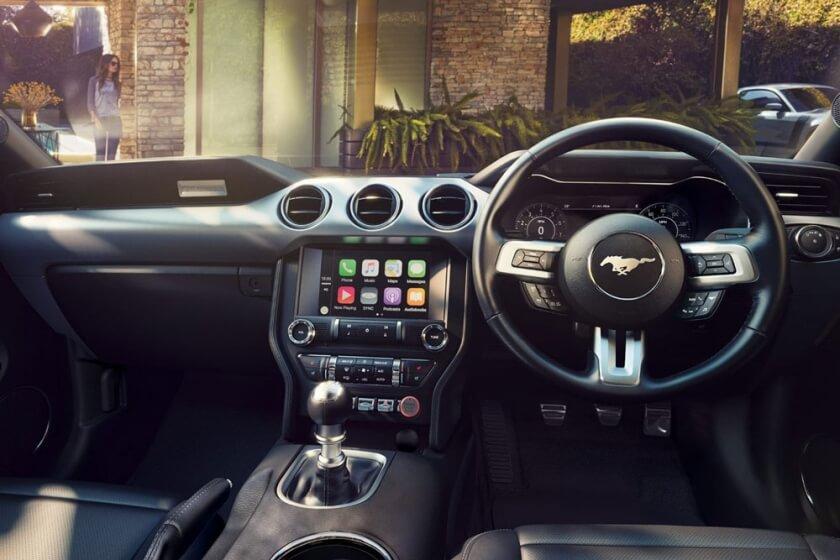 The Mustang benefits from a suite of safety and driver aid features. The aids available are;

These innovative standard features all aim to help drivers feel more comfortable and secure behind the wheel of the new Ford Mustang.

Outside, the Ford Mustang still keeps the same retro cues to its design from the last model, but looks more sleek and modern. Moreover, it has a presence that Mustang enthusiasts will love. Upfront, there is a more aggressive looking bumper with a larger, yet lower grille. In the middle of the grille is a galloping horse logo that has been carried over from the last model. A pair of sculpted lines rise from the long bonnet, and LED headlights come as standard. Moving towards the rear end, there is a new bumper and quad exhausts (for the V8 model). 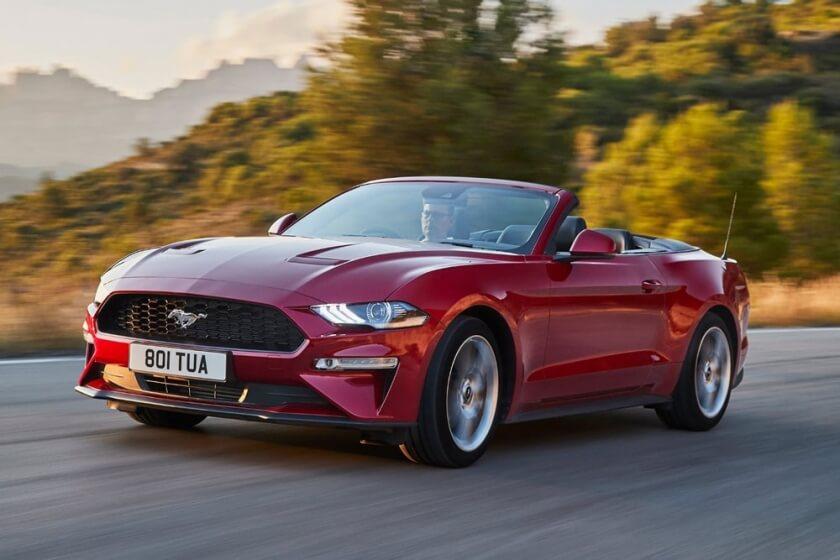 It also offers decent practicality, with a healthy 408-litre capacity, which is enough to fit a pushchair or multiple suitcases for a weekend getaway. A range of standard, premium and exclusive colours are available across the Mustang range: Race Red is the only standard colour available, while there are 5 premium colours and 4 exclusive colours. Premium colours include: Oxford White, Shadow Black, Velocity Blue, Ingot Silver and Kona Blue. As for exclusive colours, there is Magnetic, Orange Fury, Ruby Red and Need for Green.