Alfa Romeo has unveiled their first ever SUV at the LA Motor Show. It's due to go on sale in 2017 prices are expected to start at around £35,000.

Alfa Romeo has made some major changes over the past few years. Until the release of the 4C in 2013 and Giulia in 2016 there were only two models in the Alfa Romeo line the Mito and Giulietta. So the total currently stands at four but, Alfa Romeo has announced they plan to add 8 new models to their line up before the end of the decade, so that means there are still another 5 new Alfa's to be seen after the newly released Stelvio takes the model count up to 5.

The Stelvio is named after a famous mountain pass in the Italian Alps, at its launch in LA, Alfa Romeo had very much put their best foot forward showing off the top of the range Stelvio Quadrifoglio. This performance version is powered with a 2.9 litre twin turbocharged V6 engine capable of 503 bhp. There is a 'blink and you will miss it' 0-62mph time of 3.9 seconds and an impressive top speed of 177 mph. In the standard versions, it is thought more modest 2.0 litre petrol engines and 2.2 litre diesel engines will be offered. All engines will come with an 8 speed ZF automatic gearbox, with the choice of changing gears using paddles behind the steering wheel. The Stelvio will feature Alfa Romeo’s DNA driving modes, D for

dynamic, N for Natural and A for Advanced efficiency so you can choose your driving mode to reflect your mood. The Quadrifoglio version has an extra driving mode R, for race – the name says it all, this will be the mode for all the thrill seekers on the road. Alfa Romeo is using Q4 four-wheel drive systems, that will deliver all power to the rear wheels under normal driving conditions, but if any slip is felt up to 50% of power can be directed to the front axle. 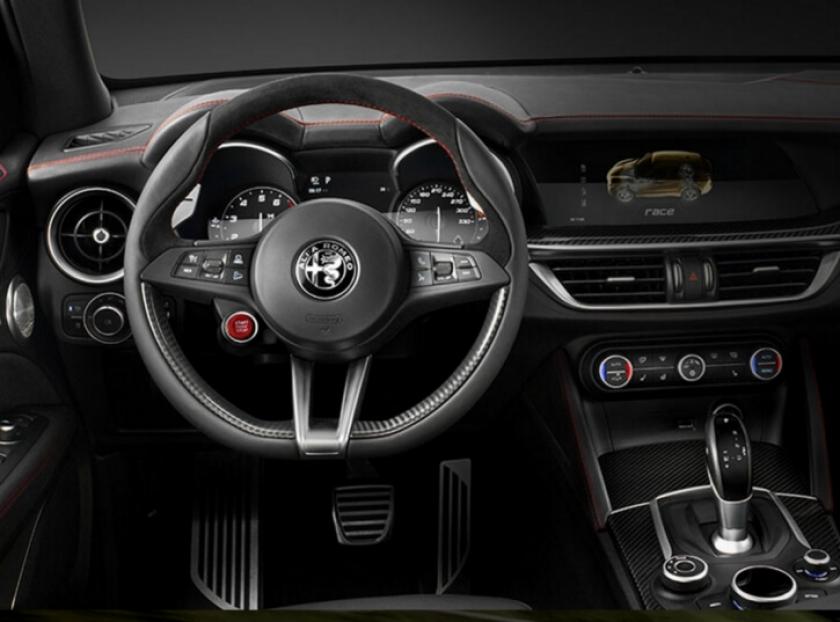 optimal position for ease of reach when behind the wheel. The Quadrifoglio model revealed at the launch featured an 8.6” touchscreen, suggesting a slightly smaller screen will be used in standard models.

On the outside design inspiration has been taken from the Giulia, with the same offset front number plate, narrow LED headlights, shield shaped grille and includes gaping air intakes. The Quadrifoglilo model has the added impressive quad exhaust layout which is sadly not thought to make it onto standard models. The Stelvio will stand at 4,680 mm long, 2,160 mm wide and 1,650 mm tall making it a mid-sized SUV offering.

The new Stelvio will provide competition for the Jaguar F-PACE, Porsche Macan and Range Rover Evoque. Rumour has it to take advantage of the fast growing SUV market, Alfa Romeo are planning a smaller and larger SUV to join their line up soon.

What do you think of Alfa Romeo’s first SUV?