It’ll come as no surprise that auto manufacture is big business, but how does it compare with other industries?

Car manufacturers from all over the world command huge values on the stock market. For the uninitiated, “market capitalisation” – often referred to as the market cap – is the value of a publicly listed company calculated by multiplying the share price with the number of outstanding shares.

Essentially, it’s how much the stock market believes a company is worth.

We’ve looked at the 15 largest manufacturers by market cap to see how the most highly valued auto brands stack up against the world’s biggest companies.

To demonstrate how much value is assigned to the largest global automotive brands, we’ve compared the three top-performing car manufacturers (Tesla, Toyota, and Volkswagen) to other sectors to show how motors stack up against the world’s most recognisable brands spanning entertainment and e-commerce to fitness and travel. 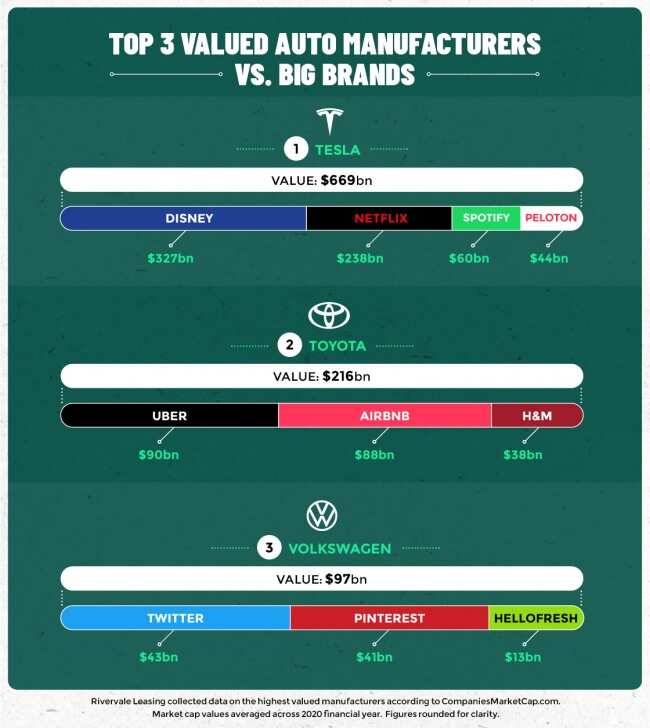 As you can see, the three highest-value manufacturers are worth more than some of the most recognisable brands on the planet – especially Tesla which is worth the same as Disney, Netflix, Spotify, and Peloton combined.

Tesla is valued higher than its closest seven competitors combined

Elon Musk’s EV manufacturer has gone from strength to strength since it went public in 2010, with a stratospheric rise from an initial public valuation of $2.5bn to an average of $669bn over the 2020 financial year.

In fact, the market cap assigned to Tesla in the 2020 financial year means it ended the year worth more than the next seven manufacturers in the listings combined. 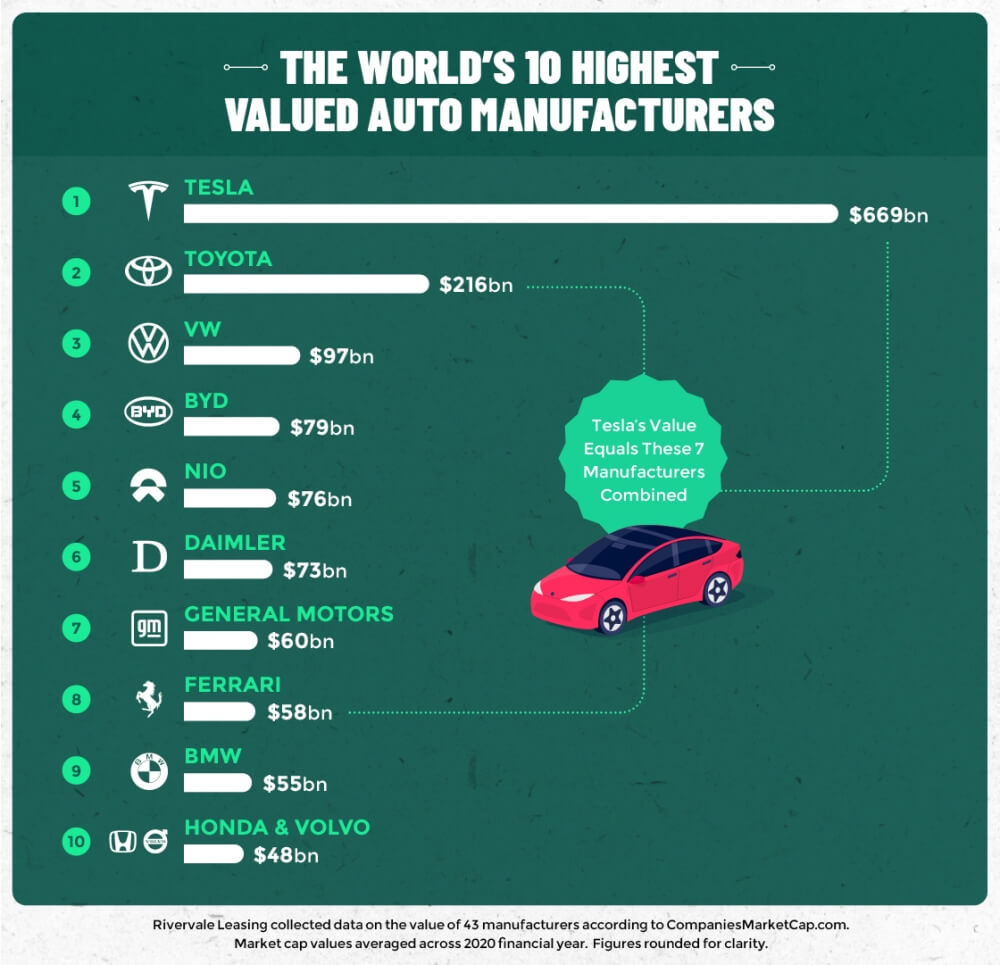 Some household names surprisingly didn’t quite make the top 10 in terms of overall market cap value in the 2020 financial year, including Hyundai, Ford, and Stellantis (manufacturer of brands including Peugeot and Vauxhall).

Over the past decade, there has been growth across the board for the manufacturers included in our study with household names like Ferrari (+383%) and Hyundai (+300%), however, none have seen the remarkable rise that Elon Musk’s now-iconic EV company has experienced. 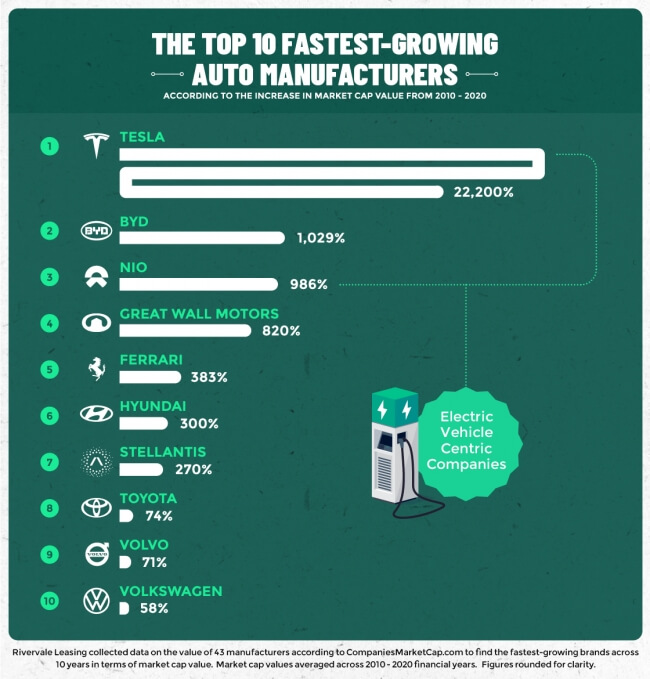 It’s interesting to note that the three companies (Tesla, BYD, and NIO) which have seen the largest growth to their market cap are all known as EV-forward brands showing that the money is indeed following the green revolution in auto manufacture.

Further to that, BYD (#2) also partnered with Toyota (#7) in 2020 to develop BEVs (Battery Electric Vehicles) with the latter having been slow to embrace EVs, focusing more on hybrid models, which has led to other manufacturers getting a head start on the push towards fully electric fleets.

With the rest of the industry following suit to meet their respective country’s climate targets and appeal to more eco-savvy consumers, it will be interesting to see if the wider adoption of EVs will dent Tesla’s current dominance.

China leads the way with the most high-performing auto brands

We’ve examined the value of hugely successful auto companies, demonstrated how the past decade has added even more to their value and how that compares to other global brands. But where is the home of high-value manufacturing?

It turns out that despite having Tesla to shout about, the USA is still second to China when it comes to the number of high-performing companies in the top list. 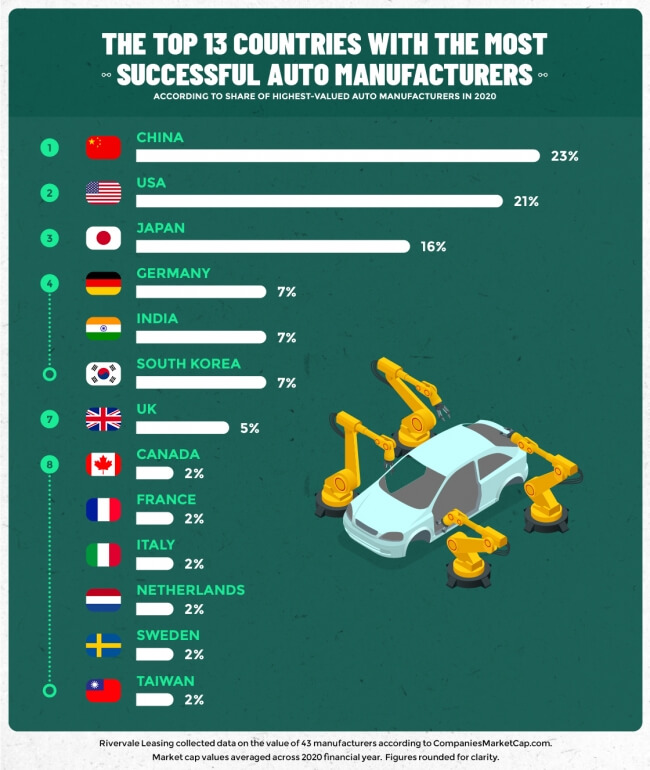 The Countries with the Most Successful Auto Manufacturers

The top three countries are laps ahead of the others who don’t even break double percentage figures in terms of market share.

For more automotive news, insights, and plenty more besides, visit the Rivervale blog. You can also explore our latest leasing deals, or get in touch on 01273 433480.