Rivervale Leasing compared 1,000 car insurance quotes to reveal how much your postcode affects your policy. We mapped our findings to show which UK cities have the biggest increases and decreases on the average £430 insurance premium, according to The Association of British Insurers.

Is your city saving you money or putting you out of pocket? See the results of our latest study or find your own city in our complete database.

10 most expensive cities for car insurance 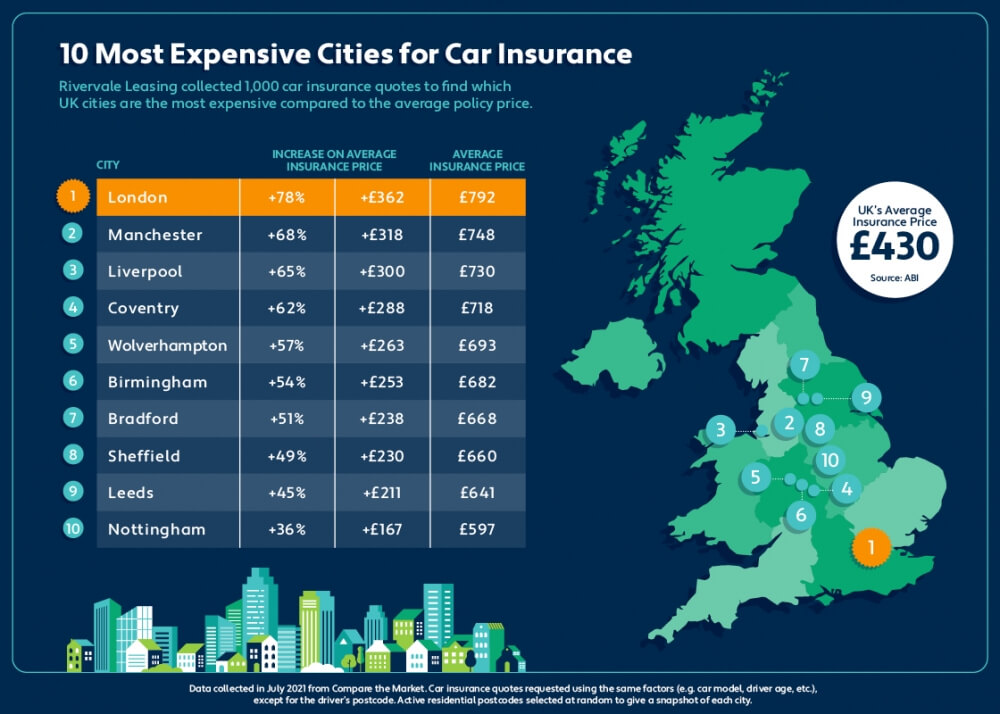 Londoners pay the most for car insurance overall, according to our study. On average, quotes from the capital city resulted in a huge increase of 78%, when compared to the typical policy price. That means you could pay up to £362 more than the average UK driver – a shocking £792 in total – simply by living in London.

Manchester and Liverpool are £300+ more expensive for car insurance, on average

Manchester follows as the second-most expensive city for car insurance, with quotes averaging at 68% more than the typical annual policy. This results in a huge £318 increase, totalling £748 for one year’s premium.

Living in Liverpool could also set you back, our research found. The third-most expensive city saw an average increase of 65% or £300 for insurance quotes, costing £730 on average. 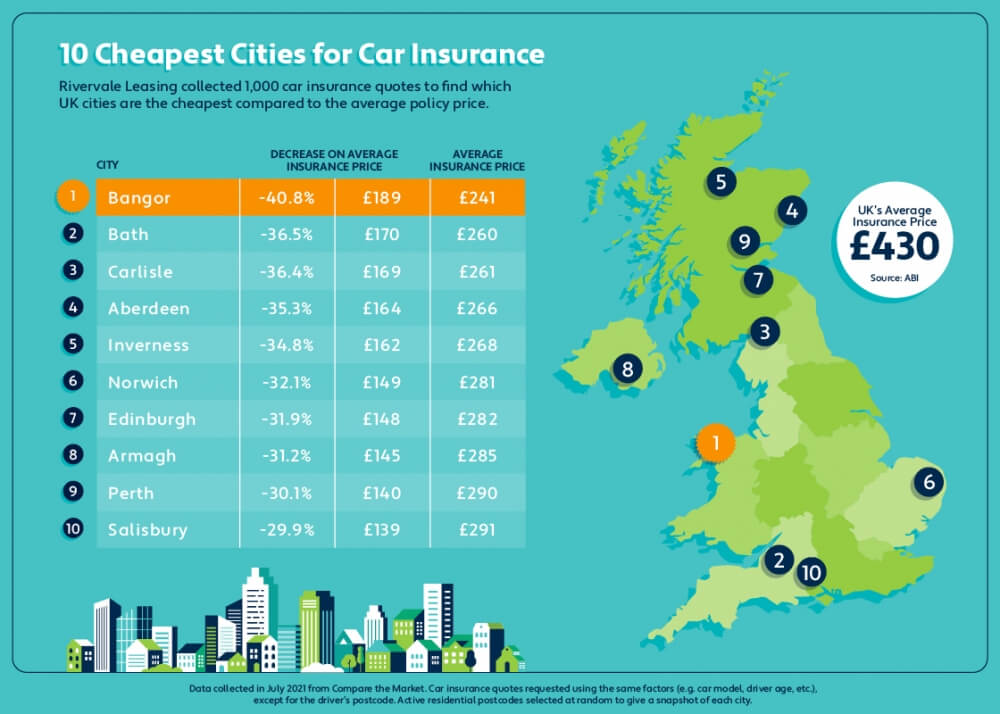 Bangor drivers’ insurance policies are 41% cheaper than the UK average

The cheapest place for car insurance is Bangor, according to our research. We found that drivers’ policies in the Welsh city were 41% cheaper than the typical UK insurance price. At just £241 for an annual policy, you could save a huge £189 on your premium, on average.

Scottish drivers pay up to £164 less for car insurance, on average

Drivers in Scotland can take advantage of low-cost premiums, as four Scottish cities make the top 10 cheapest places for car insurance, including Aberdeen, Inverness, Edinburgh and Perth. Aberdeen is the least expensive overall, as quotes are 35% cheaper than the average insurance cost, saving up to £164.

Find more studies and news in the Rivervale Leasing blog, featuring tips to save money on your insurance and ways that car mods could affect your policy. Or if you’re considering car leasing, check out our guide to insuring your lease vehicle.

Rivervale Leasing compared car insurance quotes across 50 UK cities, taking 20 policy prices per city, totalling 1,000. The data was collected in July 2021 from Compare the Market. The data was updated in August 2021 to reflect the most recent average insurance price, according to the ABI.

The quotes were requested using the same factors (e.g. car model, driver age, etc.), except for the driver’s postcode. Active residential postcodes were selected at random to give a snapshot of each city. The cheapest annual quotes were chosen, excluding policies with a telematics system.