Back in the autumn of 2013 came the announcement of a new Jaguar that promised to be ‘the most efficient, advanced and refined premium sports saloon ever seen’. Since then we have been drip fed tiny pieces of information about what to expect, whipping us up into a frenzy of excitement that won’t stop until the official unveiling on September 8th.

So what have Jaguar been teasing us with so far? After all the build-up the Jaguar XE really has a lot to live up to, for all our leasing customers we’ve compiled every miniscule snippet of information, so let’s take a look at the story so far………

Four months ago saw the arrival of a video that saw the XE peek out from under a shiny silver cloak, along with this came some technical details that should have Jaguars rivals breaking out into a cold sweat…….

Jaguar are claiming their most efficient model will be capable of producing 75mpg and less than 100g/km of carbon dioxide meaning road tax will be charge free. The key to achieving this efficiency is aluminium. 75% of the XE will be made from this lightweight material and a new grade of recycled aluminium alloy made especially for the XE – this makes the XE superlight. But don’t worry, although this makes the XE superlight, it’s still super tough, Jaguar have ensured the aluminium body exceeds current safety regulations and there’s also another video released a few days ago to tell us all about it……….

There will be an Integral Link Rear Suspension System that will provide lateral and longitudinal stiffness as well as sharp response and excellent road handling. It will also limit the effects of big bumps on the road to provide a much smoother driving experience. The Double Wishbone Front Suspension System is based on that of the F-Type and the latest Electric Power Assisted Steering will provide agility and the most refined steering and handling. The XE will also feature All Surface Progress Control perfect for tricky weather, as soon as the car senses a tiny slip it will automatically gain traction for you to reduce the risk of skidding. It’s like a low speed cruise control, no driver interaction is needed. The other usuals will be present such as self-parking and active lane keeping. There’s another helpful video to explain the superior handling of the XE released only hours ago. There will be choices of engines available, with the most efficient coming from the new Ingenium range that are lightweight, low friction, low emission engines with a four cylinder petrol and diesel version on offer. As well as these you could also choose to have the F-Types V6 engine in your new XE. 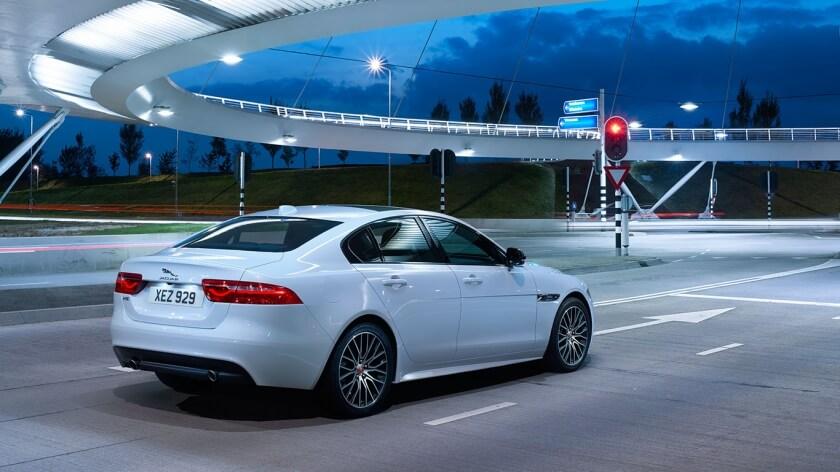 It’s all sounding good, but how are Jaguar intending to take out its rivals? The main contenders are the Mercedes-Benz C-Class which currently achieves 70.6 mpg, the BMW 3-Series that reaches 68.9 mpg and the Audi A4 with only 67.3 mpg ……. You may notice these are all German, so what does Jaguar do …….. Go straight to the heart of the competition. Jaguar sat a camouflaged BMW 3-Series in a German square directing passers-by to a website – der-neue.com that translates to ‘the new’ and what did those interested Germans find when they went to the site – it’s devoted entirely to the new XE ….. Cheeky!

On top of that Jaguar are using celebrity power to fuel our excitement even more. Idris Elba and Stella McCartney will be lending a hand as well as Emeli Sande who is writing a FEEL XE song to perform at the launch. And finally an official picture has been released! Nothing has been left to chance so surely nothing can go wrong for the XE!