As the demand for electric, hybrid and alternative fuel vehicles increases, Mercedes-Benz have unveiled the first of up to 10 new models due before 2025.

The Mercedes-Benz EQC is the first all-electric SUV from the German manufacturers and is probably one of the most significant models from them during the transition from traditional fuels and power sources to more eco-friendly and long-term energy solutions. The EQC is anticipated to offer around 200 miles of range, however these remain initial reports and nothing has been confirmed as yet. Where its competitors are concerned, the likes of the Tesla Model X and Jaguar I Pace currently seem to offer more however we are waiting to find out the full arsenal the EQC offers. What’s more interesting however is what we are anticipating from competitors in this area such as the BMW iX3, the Audi e-tron and VW I.D Crozz.

In terms of look and size the EQC is comparable to the Mercedes-Benz GLC however it is longer and will sit lower. Inside you will see the upgraded version of the GLC’s cabin together with a newly designed dashboard that includes an infotainment panel, and a new multifunctional steering wheel with touch pads.

It will sit in the bracket of SUV/Crossover/Compact SUV (if there is such a thing) and as expected will refer to luxury status echoed through the Mercedes-Benz range. The wheels come in a slab-bladed alloy and the headlight units run along the lower edge of the bumper designed to emit light that joins the daytime running lights.

Mercedes have developed and electric drivetrain to be used across the EQ range, the technicalities of which have not been confirmed by the manufacturer for obvious reasons. What we do know is that it combines motors, a front one tuned for efficiency in the low to mid-range and the rear for more performance orientated driving in the mid to high load range.

As you’d expect the EQC will offer drivers several driving modes of which ‘Sport’ we are told will deliver a 0-62mpg in 5.1 seconds with a top speed of 112mph. The energy comes from a 80kWh battery that weighs round 650kgs and enables AC charging via either regular mains or high-voltage public charging stations. You’ll be looking at around 40 minutes of charge time to get from 10% battery up to 80% battery. 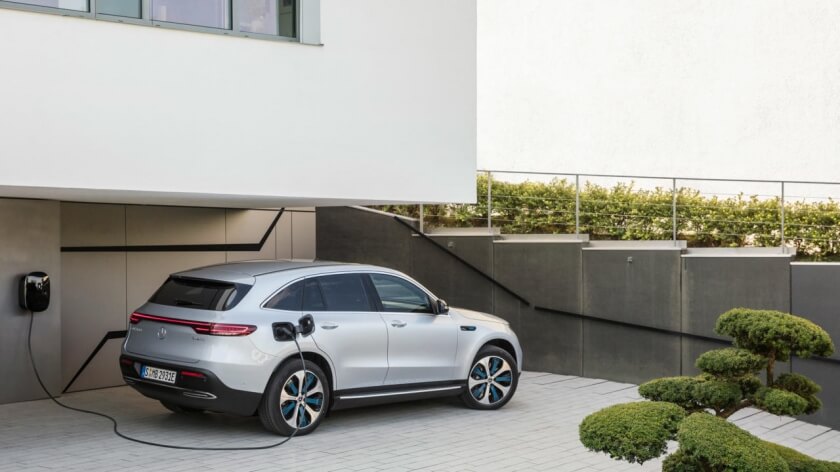 The EQC will have a charging app which is promised to give access to stations from a variety of providers, including those in other countries and offer a system to pay for charging within it.

Within the driving modes, users can configure their own individual program based on feedback provided by the vehicle. Drivers can also lift off the accelerator and opt to use the energy recuperation instead of brakes when the system expects an imminent reduction in speed.

An exciting new chapter from Mercedes, we are all keen to see how the rest of these models unfold in the future!

Do you think the UK is ready for all electric vehicles?