Everything You Need To Know About The New Ford Focus

The all-new Ford Focus has been revealed at a launch event in East London's Olympic Park and promises to be;

This will be the fourth generation Focus. Ford's family hatchback has been a huge success selling 1.97 million models here in the UK and 16 million globally. 2018 marks the Focus's 20th anniversary and it is celebrating in style with a complete makeover inside and out.

The fourth generation focus has grown with the wheelbase increasing by 18mm, this creates a more spacious cabin with 56mm more knee room for rear passengers. A larger Focus, does not mean a heavier Focus though as overall weight is believed to have been lowered by 50kg helping those all important fuel economy figures.

The exterior styling mirrors that of the new look Fiesta, which received it's update last year, so we can see a larger grille, more horizontal headlights and a more upright windscreen. 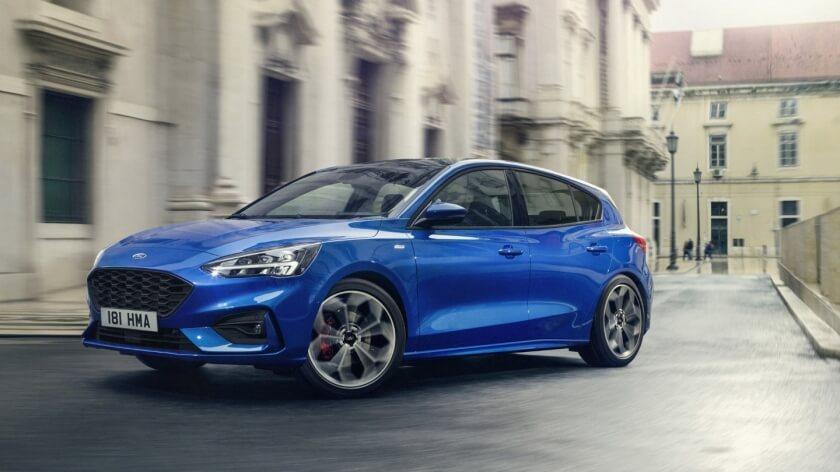 Ford's new lighting system aims for maximum visibility by using a forward facing camera to monitor the road ahead. If a bend is coming up the headlights can be curved around and can be directed away from approaching traffic to avoid dazzling.

All the usual body colours are available as well as the exotic sounding Desert Island Blue, Orange Glow and the special Dark Mulberry which will be exclusive to the Vignale trim.

Interior Features and Technology available on the New Ford Focus

Ford revealed the new direction for a clutter free, button free interior with the Fiesta and this theme has continued in the new Ford Focus with 50% less buttons and dials found on the dash compared to the previous model. 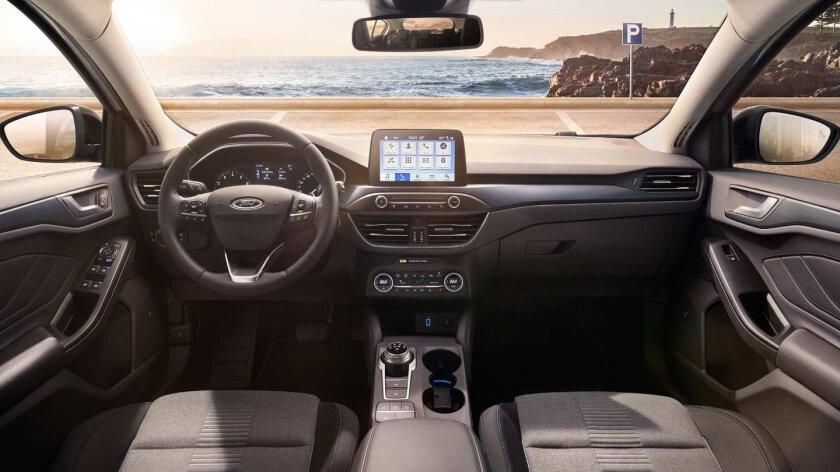 The majority of features can be operated via the 8" touchscreen located in the centre of the dash. This media interface is powered by Ford SYNC 3 which includes Apple CarPlay, Android Auto and Bluetooth as standard.

The new FordPass Connect modem will be available as an option. This will make your Focus a Wi-Fi hotspot for up to 10 devices with a connection area which extends up to 15m away from the vehicle. With FordPass you will also receive live traffic information and access to eCall to get help quickly in the event of an emergency. FordPass also has a supporting smartphone app in which you can control locking and unlocking, start your Focus remotely or find your vehicle's location if exactly where you've parked has slipped your mind. 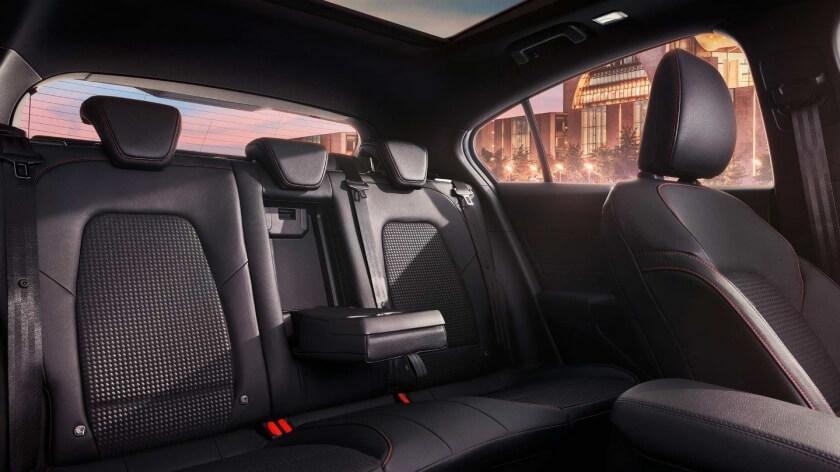 You could also opt for a wireless charging pad for easy smartphone charging and Head-Up Display so all vital information is presented on the windscreen in clear view for the driver.

The decluttering of the cabin area has also affected the handbrake which will now be electronic and the gear selector for the automatic version which is now a dial, both these features save space on the centre console, which has been made narrower increasing shoulder space for the driver and adjacent passenger. 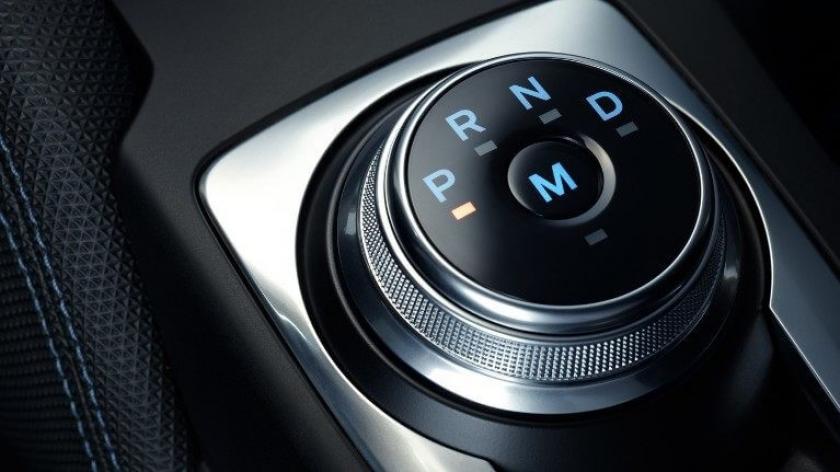 We will be seeing the 7 trim levels we are already familiar with throughout the rest of the Ford range in a hatchback or estate bodystyle, all available to order from July. The biggest surprise is the price. The entry level Ford Focus Style will have a starting price of £17,930 which is a substantial £2,300 cheaper than the previous Style model. Moving on from here is the Zetec with more advanced features available as standard and then onto the more luxurious Titanium and Titanium X. For those who appreciate a sporty feel the ST-Line and ST-Line X are available with a more athletic appearance and 10mm lower body. The top of the range Vignale represents the ultimate in comfort of the Focus range and is due to join the line up in the Autumn. 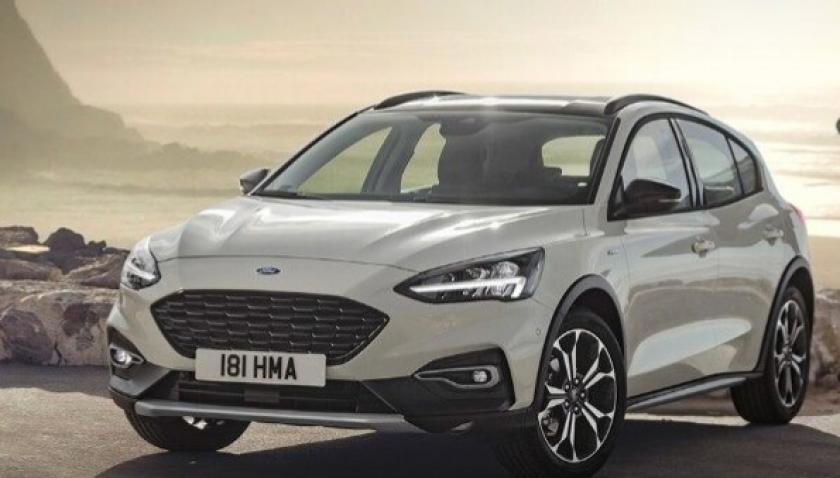 A new addition to the Focus range will be the Active. The Fiesta Active has already been revealed and the Focus will also be getting a crossover variant which features a 30mm higher ride height and extra body cladding. The exact release date of the Ford Focus Active has not yet been released, but is believed to be during in the Autumn.

Examples of features included at each trim level can be seen below; 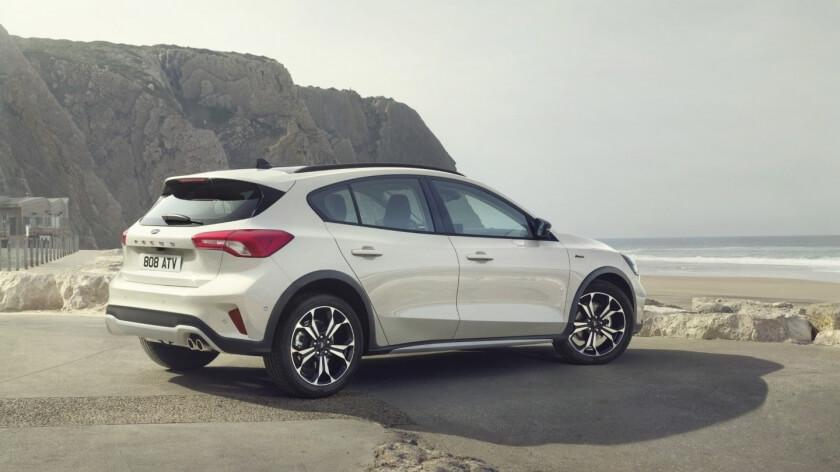 The new Ford Focus features many semi-autonomous driver aids within Ford Co-Pilot 360. This set of technologies includes Adaptive Cruise Control which can bring the Focus to a complete stop and accelerate again perfect for traffic jams. Lane Centring ensures you stay in place on the road and uses clever road edge detection, so can still be used on roads where white lines are not present. Active Park Assist 2 can manoeuvre your Focus perfectly into your parking spot and Evasive Steering assists the steering around of slower and stationary vehicles to avoid any collisions.

Even the engines in the new Focus have had a tweak, with petrol engines receiving a new turbocharger and cylinder head, a higher compression ratio and increased injection pressure. Petrol engines have also been fitted with a petrol particulate filter to reduce harmful emissions further. All engines will come with stop/start technology as standard and a new 8-speed automatic option will be available on the higher spec models. For the first time in the Focus driving modes of normal, eco and sport will be available to choose from to suit your driving mood.

"We wanted our all-new Focus to be a product customers fall in love with, and stay in love with." - Amos Leenarts, Ford European Design Director

To begin with petrol engines will come with a choice of the 1.0 litre EcoBoost or 1.5 litre EcoBoost. The 1.0 litre engine will have power output choices of 85PS, 100PS or 125PS. Co2 emissions range from the 107g/km to 115g/km with the lowest figure found on the 100PS EcoBoost engine.

Rumour has it a hybrid engine will become an option for the Focus next year comprising of a 1.0 litre petrol engine with electric motor. This is thought to be a mild hybrid so will not be a plug-in model, but should decrease Co2 emission figures further.

What do you think of the new Ford Focus?