2017 has been a busy year in the motoring world; 2040 was announced as the end of the combustion engine, Tesla sent the world into a frenzy with the surprise reveal of the new Roadster and pretty much every manufacturer made sure they had an SUV in their line up.

So, what is there to look forward to in 2018? I asked the Rivervale Leasing team which new cars they are most excited about seeing appear on the roads in the coming new year ... 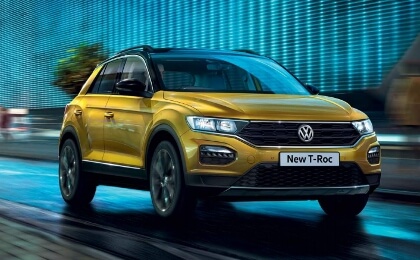 The Volkswagen T-Roc is a brand new car and is the smallest SUV in the VW family and is currently available to order with the first deliveries expected early in 2018.  Volkswagen describe it as strong, striking, and sporty.  There are many ways to personalise the T-Roc from interior colours to contrasting roof and body colours.

Initially, there are 4 trim levels to choose from beginning with the entry level T-Roc S, on to the SE and Design models and ending up at the current top of the range T-Roc SEL.  A T-Roc R Line is due to join the line up later in 2018 but is not yet available to pre order.

Lamborghini is joining the long list of manufacturers who have added an SUV to their line up in response to the ever growing popularity this body style is enjoying.  However, we were all expecting something extra special from Lamborghini and they delivered the Urus.  The Urus will be the fastest SUV on sale powered by a V8 4 Litre bi-turbo engine with 650HP capable of 0-62mph in only 3.6 seconds and reaching a top speed of 190mph.

The Urus also takes the title of largest wheels found on an SUV with hexagonal wheel arches that can make space for 23" wheels.  As you would expect luxury is found at every turn with Alcantara leather, a state of the art

infotainment system and a choice of 7 different driving modes.

The Urus is available to order with the first deliveries expected spring 2018.

Read More : The Lamborghini Urus - The SUV with Superpower

While not a brand new model the BMW 3 Series will be getting an update for 2018.  Full details have not been released yet but spy shots reveal styling more in line with the 5

series including an altered bumper and new kidney grille and headlamp arrangement.

The new 3 series is going to be made from carbon fibre composites so a lighter BMW can be expected which will in turn improve efficiency.  A slight extension in the length of the wheelbase improves legroom and the latest BMW iDrive Infortainment System will feature.   New 3,4 and 6 cylinder engines are expected as well as a plug-in hybrid from launch.

You will have to be patient if you are waiting for the new 3 series as it is not due until late 2018.

The I-Pace is Jaguar's first ever all electric SUV and will provide 700Nm of instant torque, 400PS and will go from 0 - 60mph in only 4 seconds all while producing zero emissions.  A 90kWh battery is used which enable a range of around 310 miles on a single charge.

There are 5 full seats, boot space of 530 litres and a further 36 litres available for storage in the front luggage compartment.

The I-Pace will be available from Summer 2018.

The updated GT has the familiar wide, low body and eye catching looks expected from this manufacturer.

The engine has had a complete makeover.  A new 6.0 litre W12 engine can accelerate from 0-60mph in just 3.6 seconds and delivers a top speed of 207mph.  This new engine also has a few tricks to increase efficiency.  It has both direct injection and port injection systems which it will switch between to make sure you are getting the most out of your fuel.

As the GT is built by hand the personalisation options are virtually limitless creating a truly unique car for the lucky owner.  Seats are made from hand stitched Grade A leather and can be adjusted up to 20 different ways for ultimate comfort, with the option to add ventilation and massage features.

There's one thing you can be sure of when you step inside a Volvo - class leading safety, and the XC40 is promising to beat others for safety, practicality and technology.  It is a brand new compact SUV designed to excel on the city roads.

As standard every XC40 will be equipped with City Safety.  This system has cameras and sensors watching the surrounding area at all times so it can be ready to step in and brake for you if a collision with another vehicle, pedestrian or animal is likely.

Alongside advanced safety features the XC40 offers a little modern luxury as well.  During 2018 In-Car Delivery will arrive in XC40's in the UK.  This system allows you to order your shopping and have it delivered to the boot of your car.

Once you have told the car the delivery time and location a one-time pass-code is sent to the delivery company which will grant them access to your boot.  When you return to your car - your shopping is waiting for you!

The Volvo XC40 is available to order now and the first deliveries are expected in March 2018.

Which car are you most looking forward to in 2018?

The Most Spacious Family Cars of 2021