Are Electric Cars Worse For The Climate Than Diesel Cars?

It is no secret that the production of electric cars is constantly on the rise, but are they worse for the climate than diesel cars? If so, what other technologies can be used instead to bring emissions down?

Think-tank, Germany’s top auto industry consultancy, recently published a study claiming electric vehicles (EVs) don’t actually do much for the environment and aren’t the vehicles to drive us, humans, to an emissions-free society.

According to the report conducted by Christoph Buchal of the University of Cologne, published by the Ifo Institute in Munich last month, said EVs produce significant CO2 emissions both in their battery production and their charging. It is said that an EV can harm the environment by up to 28% more than conventional diesel engines.

Read more: What are the benefits of the Euro 6?

This is essentially because a lot of energy is used in the recovery and processing of lithium, cobalt, and manganese, which are rare materials that EVs heavily rely on for the production of their batteries.

The study further highlights, for example, the battery of a Tesla Model 3 pollutes the environment with 11 to 15 tons of CO2. Each battery is capable of lasting 10 years and a mileage of 15,000 kilometers per year, would equal to 73 to 98 grams per kilometer ( 116 to 156 grams of CO2 per mile), as stated in the study.

Furthermore, If you consider the amount of CO2 emissions of electricity from power plants that power vehicles like the model 3, then their economy figures could potentially be between 156 to 180 grams of CO2 per kilometer (249 and 289 grams of CO2 per mile) - more than diesel-powered Mercedes. 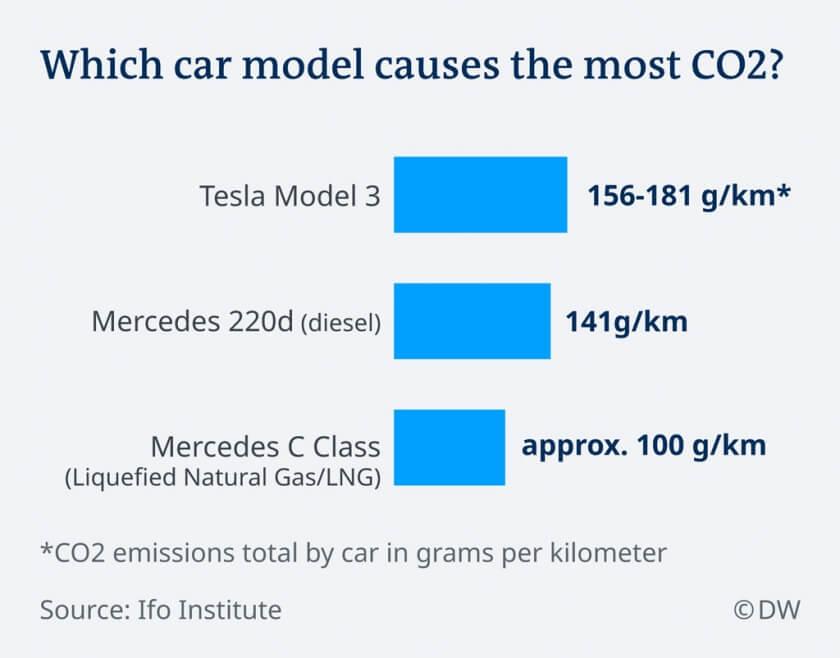 New Zealand, for instance, gets most of their electricity through hydroelectric materials. In 2017, NZ produced 42.9tWh of electricity, with more than 50% of this coming from hydroelectric, while the rest came from geothermal, wind, gas and other renewables like solar. This meant that renewable electricity generation saw an increase of 85% in 2017, according to the Ministry of Business, Innovation and Employment (see graph below).

The study criticized the EU legislation for defining EVs as “zero-emission vehicles”. German researchers called this a “deception” and that these vehicles should not be classified as such. In addition, the study also claims that the EU target of 59 grams of CO2 per kilometer by 2030 is “technically unrealistic”.

What other technologies can be used?

Researchers suggest that the best way to reduce CO2 emissions, is to use other technologies that offer greater potential, such as hydrogen motors or vehicles with combustion engines powered by green methane, as these vehicles produce significantly lower CO2 emissions than diesel cars.

"Methane technology is ideal for the transition from natural gas vehicles with conventional engines to engines that will one day run on methane from CO2-free energy sources.

“Over the long term, hydrogen-methane technology offers a further advantage: it allows surplus wind and solar power generated during peaks to be stored, and these surpluses will see a sharp increase as the share of this renewable energy grows,”

Read more: Hydrogen Cars - Are They the Future?

A similar study was made by German automotive consultancy Berylls Strategy Advisors in October last year, claiming that EVs are worse for the climate than diesel cars.

"From well to wheel, they do not really improve the situation. After all, electricity generation – including for electric cars – is still strongly dependent on fossil fuels in many EU countries. The climate does not care whether carbon dioxide comes from the exhaust pipe or whether it is released when lignite is burned to generate electricity or in energy-intensive battery production,"

Tesla’s response to the study …

Tesla have hit back saying that their batteries last much longer than the 150,000kms stated in the study, and that the study is inaccurate because it compares the Model 3 Long Range version which turns 473hp (353kW) to a 194hp (145kW) car.

“This study is flawed because it factors in a battery lifespan that’s much too short, a significantly more powerful Tesla vehicle than the comparison car, an outdated NEDC cycle to calculate emissions figures, and it estimates battery manufacturing-related CO2 emissions to be about four times our own estimates, given efficiencies we’ve achieved at our Gigafactories...

... Our own data shows that Model 3 vehicles produce less than half the CO2 that this study cites, including emissions caused by battery production, and those figures are dropping rapidly as the use of renewable energy like solar and wind continues to rise.”

Electric cars vs diesel cars - Which is better for the environment?