If the recent trend for ultra-luxurious SUVs with smooth curves and sportscar speeds has left you wanting a no-nonsense 4x4 that's tough enough for any terrain, then look no further than the new Suzuki Jimny ...

The Suzuki Jimny 4x4 was first released in 1970 and was last updated all the way back in 1998, since then it has quietly disappeared from our showrooms …

... However, after almost 21 years since the 3rd generation was released, the all-new 4th generation is now finally out and better than ever before!

The new-look Jimny will be very familiar to those who remember the 3rd generation. In a stark contrast to the curves and flow of modern car designs, the new Jimny retains its previous boxy shape, with squared-off wheel arches and short overhangs. The effect is an uncompromisingly rugged look.

Proportions are still tiny, with a short wheelbase, making manoeuvring around town a breeze. One major update is the inclusion of a touchscreen infotainment system adding features such as Bluetooth, DAB radio and sat-nav. The rest of the interior is practical and unfussy, you are unlikely to find a seat that will massage you while you drive or a specially crafted soft-touch material on your door trim.

The front circular headlights that appeared on the original 1970s Jimny have been kept and at the rear of the vehicle lights are still tucked into the rear bumper. A spare wheel is becoming a rarity in new cars, but the Jimny will complete the true 4x4 look by displaying one on the boot door. The booty capacity is 85 litres (53 litres larger than the 3rd generation model). If you want more space, you can fold down the rear seats and go to two-seater mode, which will give you the same boot capacity as a Kia Stonic (377 litres).

The all-new Suzuki Jimny 4x4 comes available in two high-spec trims, the entry-level Z4 with a manual gearbox and an automatic variant of the top specification Z5. A manual version is also available for buyers. Examples of standard features to be found at each trim level can be seen in the table below;

Read more: which compact SUV is right for me?

If you want to customize your driving experience with the all-new Suzuki Jimny 4x4, then you can select from a range of colours, and find a shade that’s perfect for you:

There is only one engine available in the Jimny range for the UK: A 1.5-litre petrol that produces 101bhp. The new Suzuki Jimny 4x4 promises a fuel consumption of 35mpg. It comes with either a five-speed manual gearbox or a four-speed auto. A simple ladder frame chassis will be used with a three-link rigid axle suspension which will make the car suitable for driving off-road and keeping costs low.

Thanks to the short overhangs and decent ground clearance (210mm), you’ve got some good numbers for an off-roader:

These numbers are better than you will get from a Jeep Wrangler, for example. All models will get an all-wheel drive system called ALLGRIP Pro. This ultimately helps drivers to adapt to difficult conditions. The 4L mode is designed for maximum torque control and traction. 4H mode enables drivers to enjoy traction at high speeds, for wintry and off-road terrains. As for the 2H mode, it allows you to have a much more quiet, smooth, comfortable and fuel-efficient ride. 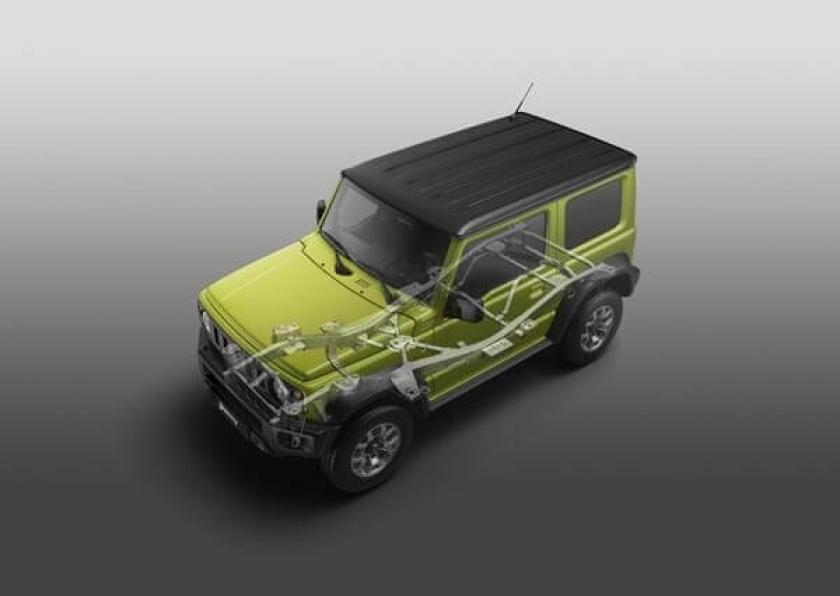 The Suzuki Jimmy 4x4 comes with all the latest performance technology to ensure it is at its best when driving off-road:

Hill hold control – This feature ultimately allows the driver to remain in control when going up steep hills – meaning you won’t have to worry about rolling backwards, even on the roughest of hills.

Brake Limited Slip Differential Traction Control - When two wheels diagonal from each other lose traction, the system will automatically brake the slipping wheels to allocate torque to the other two wheels, allowing the all-new Jimny to keep stable at all times.

The all-new Jimny offers a straight forward practical 4x4 which will be just as at home in deep mud or driving over rocks as it will on a trip to the supermarket. The Suzuki Jimny 4x4 is available to purchase for £14,455.

The Jimny is now no longer in production, however if you would like to discuss similar 4x4 car leasing options with an Account Manager - request a callback today!