In a busy office like ours it’s very rare to get a moment away from our desks here at Rivervale so when the opportunity came up to go to Goodwood for the day I quickly said yes! Having never been before, I didn’t know quite know what to expect from what is described as the ‘world’s largest automotive garden party’ but soon found there was something for everyone from old classics, everyday road cars, supercars and those that are still just a concept!

Dominating the skyline as you enter the festival is this year’s Sculpture, the largest seen so far at Goodwood’s. The sculpture, designed by Gerry Judah, celebrates 100 years of BMW so appearing are landmark race and road cars; the BMW 328 Mille Miglia Roadster, 1999 Le Mans winning BMW V12 LMR and the Brabham BMW BT 52 Formula One Car designed by Gordon Murray.

Onwards takes you to the manufacturers display areas. All were clever designs with many interactive features. The most creative and eye catching design was undoubtedly Honda. Honda took us all back to our childhoods with a replica of the toy car garage we probably all had in our toy boxes! Complete with 3 brightly coloured levels and winding lift. Within the genius display the all new Honda NXS was showcased along with the new Civic Type R which Honda describe as a wild racecar tamed for the road. 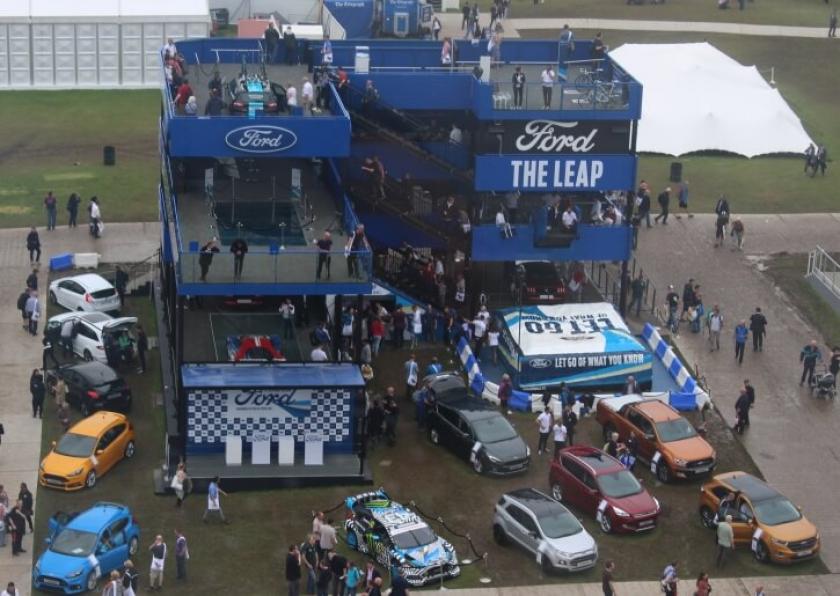 Ford came a close second with a feature that drew the crowds on the day. In line with their ‘let go of what you know’ #unlearn campaign Ford gave visitors the chance to let go and take a leap off their display … of course I took advantage of this opportunity!

The Ford Edge and Ford Mustang being the most recent additions to the Ford family in the UK were also on display, we have in depth information on the Edge here and our local radio presenter ‘Jack The Lad’ took a Mustang out for a test drive, you can take a look here.

There were also features to keep little people and big kids amused during the day in the shape of the Vauxhall Family area. Crazy football made use of the Vauxhall range and Vauxhall Adam Derby used visitors pedal power to win the race.

For supercar fans there was one model that stole the show. The £2 million Bugatti Chiron, with quad turbo charged 8.0 litre W16 engine, top speed of 261 mph, capable of 0-124mph in just shy of 6.5 seconds turned on its engines for the first time for an audience in the UK, as it made its way up the Goodwood hill.

Goodwood offers the unique chance for guests to get up close to new models although you can’t get inside all of them ….. I tried many car doors and ended up disappointed when they refused to open! With a chance to see new models displaying their intended purpose – to drive on roads. Some manufacturers even take advantage of the 150,000 strong audience per day to debut their newest models. Notable appearances for car buyers were; the Fiat Abarth 124 Spider, Alfa Romeo Giulia, Bentley Bentayga, Ford Fiesta ST200, Maserati Levante, Mazda MX5 RF, Tesla Model X and even the Renault Twingo GT made its world debut. Look out for more information and pictures on these models coming up this week in our blog.

Set in 12,000 acres of Sussex countryside Goodwood also gives manufacturers the opportunity to show what their models can do. The Land Rover experience saw members of the public driven over impossible climbs and falls while the Jaguar experience set a few people’s pulses racing as they had a passenger side seats view as Jaguars drivers showed off their drifting skills.

Lastly, what festival would be complete without a Ferris wheel! The birds-eye view of Goodwood from the top also gives newbies like me a chance to see which areas they have missed!

Here are a few more snaps from the day ...