The Mazda MX-5 RF at Goodwood

The popularity of Mazda’s 2 seater sports car seems never ending. The MX-5 is the World’s best-selling 2 seater sports car and is probably best known as a soft top convertible. But, here in the UK 80% of all MX-5s sold were a hard top version by the time the Mk3 edition was discontinued in 2014. So the newly revealed Mazda MX-5 RF is surely going to be a huge success. We took a look at Goodwood Festival of Speed where the RF had its European debut after previously being revealed at the New York Motor Show in March… 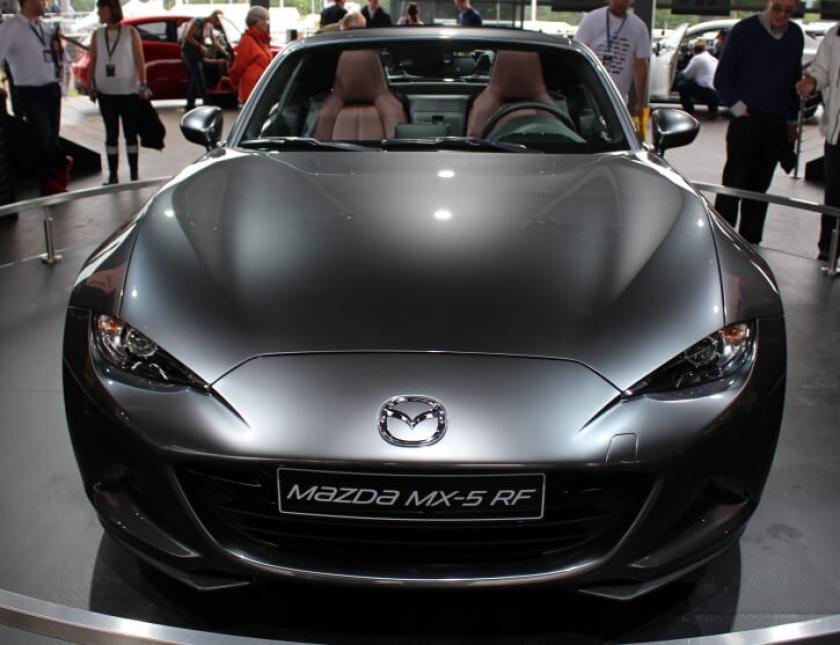 The RF stands for Retractable Fastback, which features a transformer like roof that can open or close in 12 seconds, up to speeds of 6mph. The roof lifts in one entire piece before it is stowed away in a similar fashion to the roof of the Porsche 911 Targa. The new roof created the need for a new body, which has been created in line with Mazda’s KODO- Soul of Motion design principles and gives the RF a different side and rear profile to the regular MX-5. To show the new body shape off at its best Mazda have created a new colour, Machine Grey, about which they say

“….new premium colour specially designed to accentuate the subtle yet dynamic surfaces of

Mazda’s KODO – Soul of Motion exteriors. Developed in the belief that colour is one of the elements of form, Machine Grey expresses the beauty of a machine’s strength and precision. By intensifying the contrast between light and shadow with a sleek, high-density finish, it gives the impression that the vehicle’s body was sculpted from a solid block of steel.”

Despite adding a roof to store away, the boot capacity remains the same as the other MX-5’s at 130 litres, the width and length also stay the same, the only difference in size is a height increase of 5mm. For when driver’s need a little air but conditions aren’t right to brave the top being down, which is likely in our soggy summers, the rear glass can be lowered with the roof in place.

more casual compared to the hard top’s more formal character. This is reflected in the interior, with a higher quality feel and a new LCD display added in the dash. However, the RF is expected to share the same award winning SKYACTIV engines as the soft top version. The 1.5 131ps SKYACTIV–G petrol engine will achieve 0-60mph in 8.3 seconds with a top speed of 127 mph. Drivers will achieve a combines 47.1 mpg with emissions of 139 g/km. The larger 2.0 160ps SKYACTIV-G petrol engine has a slighter faster top speed of 133 mph with a 0-60 mph time of 8.3 seconds. Fuel consumption is still good with 40.9 mph and emissions take a small rise to 161 g/km.

The Mazda MX-5 RF will not be available in the UK until 2017 and so far no prices have been released. Expected prices are around £21,000 which will be cheaper than rivals such as the Toyota GT86 and Audi TT.

What do you think of the MX-5’s new transformer roof?