Cars aren’t just about convenience; they push the boundaries of technology and design. And nothing is a better example of that than a concept car.

Concept cars demonstrate the huge strides we’ve made in technology. Often futuristic in appearance and technically impressive, concept cars seem miles away from the vehicles we are used to seeing on our roads. Yet simultaneously, they give us a glimpse of what ordinary cars could look like in the future.

What is a concept car?

Concept cars are built by manufacturers to demonstrate their technical and design capabilities. Usually unveiled at motor shows, concept cars are exciting to see because they test the usual limits of the automotive industry.

Manufacturers will pay attention to how their concept cars are received. Elements of the cars that are positively received, where practically possible, can actually make it into later releases.

In the rest of this blog, we’ll explore some of the most promising concept cars released in recent years.

Last year, Renault revealed the Morphoz, a ‘shapeshifting’ conceptual vehicle designed to be at once a city car and a long range cruiser.

While not intended to be a self-driving car, it’s still an autonomous vehicle, which is one of its most enticing features. Drivers would be able to take their eyes off the road, hands off the wheel, and lose their focus for the periods of time in which this mode is activated - which is a more realistic glimpse of what ‘self driving cars’ are likely to look like, at least in the near future.

In terms of design, the Morphoz breaks the mould of what we imagine a car’s interior to look like with seats capable of swiveling to face each other, including the front passenger seat. Impressive tech includes an in-built system that completely immerses occupants in an interactive way through video game challenges or musical playlists. The 103EX, the first ever autonomous vehicle conceptualised by Rolls-Royce, was unveiled in 2016. A vision in advanced tech and futuristic design, it seems to embody the intentions they have for their brand’s future wherein ‘each and every Rolls‑Royce will be a unique work of art.’ In fact, Rolls-Royce are looking to a time wherein every model they produce of this vehicle is as unique as a person’s own fingerprint.

It certainly promises an exciting future for them as a manufacturer, and the 103EX is just about everything you’d expect from the modern concept car: autonomous, with an in-car assistant powered by Artificial Intelligence, and heightened productivity. Specifically, the car is promised as a ‘sanctuary’ - an opportunity to make use of the time spent travelling, rather than simply whiling away the time driving.

Loosely inspired by the 2009 film Avatar, VISION AVTR from Mercedes-Benz pushes the boundaries of what modern technology could someday achieve. Looking vaguely out of this world and futuristic, VISION AVTR aims to blur the lines between man and machine, lacking traditional control features and instead opting for a central console that is sensor-reactive. That said, the car would primarily be intended to be autonomous, with certain modes giving a driver more or less control.

The VISION AVTR would be completely electric, emission-free and created with sustainable materials and no animal products, as well as integrated solar panels to minimise energy consumption.

Design-wise, you can see where the other-worldly influence comes in; the car itself looks pretty alien, futuristic, minimalistic and clean, with no sharp edges. Its wheels draw the main attention, these are spherical bubble wheels that can be driven independently of each other creating a ‘crab like’ movement for the car.

If you're looking at this in comparison to what Mercedes are doing right now, you can see they're heading in the correct direction with the likes of The New Mercedes-Benz EQE,the brands latest all-electric option. Although this AVTR concept might be a little further down the line... 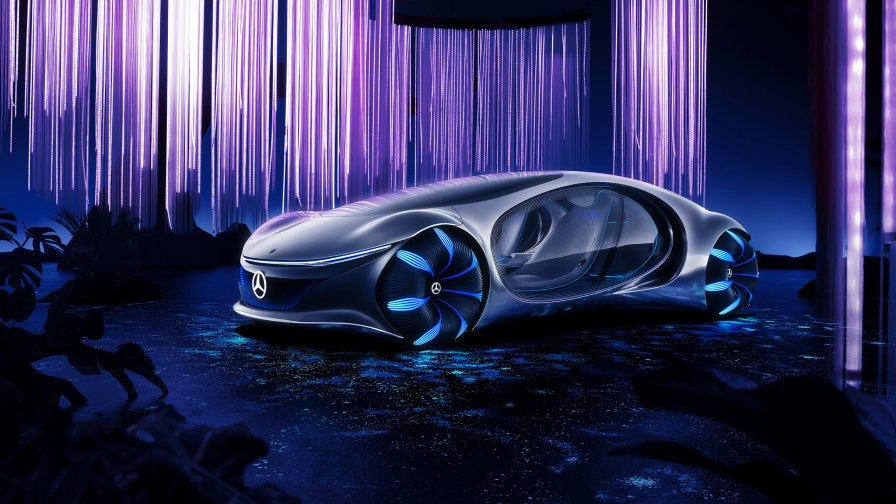 The Volvo Polestar Precept is viewed not just as a concept car, but a commitment to building more sustainable vehicles in light of the climate crisis. The Polestar Precept would be made from recycled materials such as bottles, fishing nets and sustainable cork. While futuristic in its design and tech features, it’s also realistic and logical, with Volvo stating ‘we’ve borrowed from tomorrow. Not fifty years from now.’

If Volvo managed to pull this off, with such a great focus on sustainability, it should solidify a place for them as one of The Greenest Car Manufacturers in the future!

The Polestar Precept sets achievable goals, but that doesn’t make them less ambitious. Its front grille would house sensors known as a ‘smartzone’, while it would also be highly personalisable and responsive. It would recognise its driver and when they approach, the car would react and begin preparing itself to drive.

While the kind of technology we’d need to properly facilitate these vehicles might be a long way off, it’s clear to see common themes: sustainability, advanced technology, AI-powered tools, and designs that are clean, minimalist, and perfectly futuristic. And while these models themselves will likely never reach production, innovative car technology is developing all the time.

One thing is for sure: we’ve reached an incredibly exciting period of development for the automotive industry. We’ll be watching closely to see what comes next and when you do see something that you want, call up Rivervale to see what we can do for you on 01273 433480 or request a callback at a time that suits you.

What concept cars look most promising to you?