The first battery electric car from Toyota available to mass market is due in dealerships in early 2022. The bZ4X seems to be mostly unchanged from the radical concept car we were exposed to earlier in April this year. With up to 214bhp and an impressive 280 miles of range, the bZ4X will join the non-luxury EV SUV category with competitors such as the Hyundai Kona Electric, the Volkswagen ID.4 the Tesla Model Y.

The 2022 launch of the bZ4X crossover marks Toyota’s re-entry into the EV category. Aesthetics set the bZ4X apart from other ICE SUVs from the brand, although we can see the influence of the popular RAV4 SUV here. Unlike the EV version of the RAV4, though, this new EV model will be stocked in Toyota dealerships across the country. The bZ moniker looks to be the beginning of many EV models for Toyota, as they have filed trademarks for several more bZ names - implying a family of bZ models. 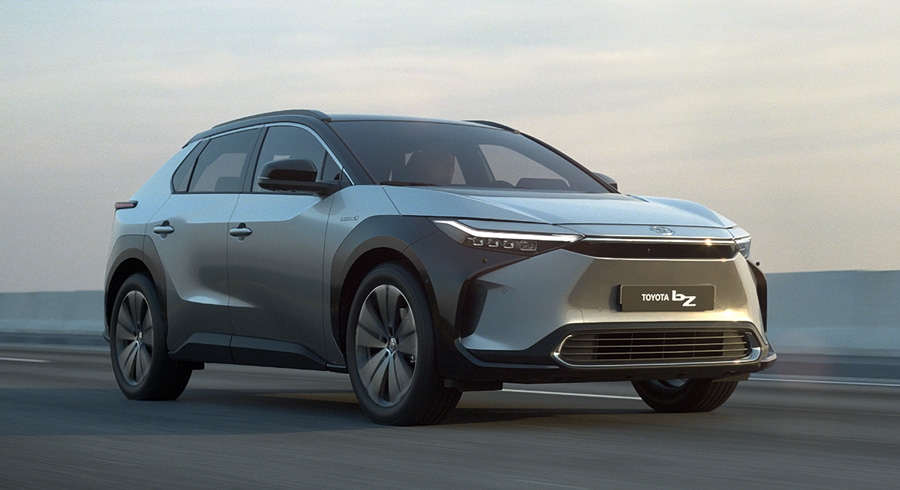 bZ refers to the ‘Beyond Zero’ strategy from Toyota - to launch a minimum of 15 solely electric new models by 2025. Seven of these look set to use variations of the bZ model name.

This bZ4X model will be the first to utilise the brand’s new electric vehicle architecture e-TNGA. e-TNGA has been developed alongside Subaru. This brand will be launching their first SUV model on the e-TNGA platform - the Solterra - a few months after Toyota’s bZ4X launches. The 4x following the model name illustrates the brand’s use of a four-wheel-drive crossover underpinning the platform. Toyota stresses the maximised levels of openness and comfort that this provides.

Toyota aren't the only ones who are making big strides in the electric vehicle community. Ford have recently released one of 2021's most important vehicles, the Mustang Mach-E: Ford's First Fully Electric SUV.

The entry level car with a single motor offers around 201bhp, and reaches 0-62mhp in 8.4 seconds. The second model, with twin-motor range-topper, sees a boost on this. Using Subaru-developed four-wheel drive tech, the power is upped to 214bhp, torque to 248bhp and the 0-62mhp time drops to 7.7 seconds.

The 71.4kWh battery pack promises more than 280 miles - and this isn’t as compromised by temperature as we often see in EVs. Using onboard solar charging tech, the “efficient and effective” heating system the brand has utilised makes sure that there is only a “modest” drop in the EVs range when the chillier days set in.

If and when it comes to charging on a long journey, fear not - you’re not going to be stuck at a service station for hours on end. The car can take charge of up to 150kW, which equates to topping the battery back up from empty to 80% in only 30 minutes.

We've teamed up with Virtus Energy to provide an easy process to obtain the latest high-speed electric car chargers. We can add the cost of the provision and installation into your monthly lease rental cost. Schedule a chat with an EV charger specialist to learn more.

The brand’s ‘Beyond Zero’ strategy goes beyond model names. In fact, it alludes to the fact that the Japanese manufacturer wants to make their cars carbon neutral. Not just to drive - but throughout their whole life cycles. This is a big ask in EV tech, where traditionally the manufacture of the battery has come with a larger carbon footprint. From supply chain to disposal, Toyota wants to bring their cars’ carbon emission to net zero.

The spacious-feeling, open cabin is created through the use of a long wheelbase and short overhangs on this bZ4X model. Instead of the conventional front grille, Toyota has chosen to opt for a thin black strip on this model, which contains the sensors for autonomous driving features. 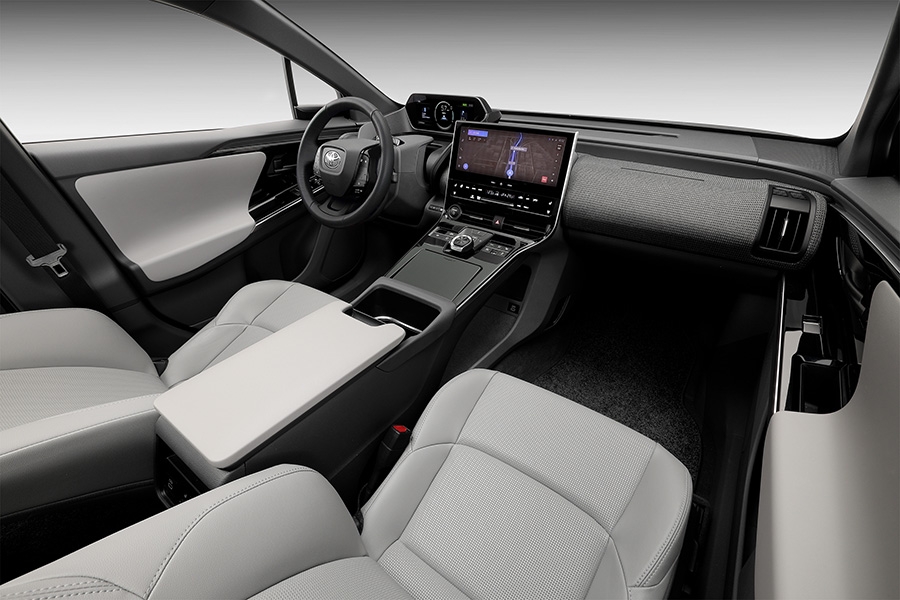 The instrument panel is unobtrusive, mounted low so as not to impact your visibility and to minimise any sense of distraction, and the central display, central console and dash all mirror the concept car revealed earlier in the year. Panoramic views for the driver and a sense of connection to the road are prioritised, and the brand uses its pioneering ‘steer by wire’ system here (removing the manual connection between steering wheel and front axles) in a new and exciting development.

Vehicle interiors have always been something that's worth a proper look, there is so much disparity between the greatest and the not so great interiors that it's an important thing to consider when creating something new and futuristic. Be sure to view 7 of the Best Vehicle Interiors on our blog page!

From a brand which has previously invested heavily in hybrid technology, it’s great to see a fully electric model come to market, especially with the bZ’s ‘Beyond Zero’ dedication to achieving carbon neutrality. As the world’s second-biggest car manufacturer, it’s unlikely that the bZ4X won’t make waves upon launch - and we’re excited to see how the car fares. The model will launch to the European market on 2nd December.

Considering moving towards EVs, or upgrading your EV lease? Get in touch with Rivervale today on 01273 433480 or request a callback to see how we can help you find your perfect drive.