The Life Cycle of A Rivervale Trade In

At Rivervale we like to offer our customers the chance to trade in their current vehicle to reduce the price of their next one whether that be one of our used approved vehicles or a shiny new lease vehicle. But I wondered, what happens to all the trade ins? Are they re-sold or left in some hideous car graveyard?

In my quest to find out I was told to speak to the ‘tin hut crew’ who are they I asked? And that’s when the stories began … Some said they only need the juice from car batteries to survive … Some said their homes were made out of old car tyres and some even said they communicate using car engine sounds. All I knew for sure was that I needed to find out more about these curious creatures!

When I arrived at the hut there was a very special trade in that had just arrived … A Jaguar F-Type. The F-Type was getting the special Rivervale treatment to make sure it was perfect for its next owner.

The Jaguar was subjected to much more than the usual wipe down with a sponge and a hoover out. All minor scratches are removed in a process the crew called ‘mopping’. This is like no mopping I have ever seen – a very fine layer of paint is smoothed away leaving behind a showroom shiny body. When cleaning the rest of the bodywork not one millimetre is left untouched, inside every vent and every groove is cleaned even underneath the spoiler where I lent a hand!

Not one blemish is accepted so back up was called in to resurface the alloys when a tiny imperfection was spotted – we’ve all bumped the curb at some point in our lives! The Alloy is cleaned and then the scuffs are sanded out. To prep the surface for paint, it is heated up under a lamp, then sprayed and left to sunbathe again to set the paint! An hour later perfection was restored and the tin hut crew were happy again!

Inside is polished, hoovered and the leather is even treated to keep it soft and supple.

Then it was onto the Health Check – no vehicle leaves the Rivervale premises without getting a clean bill of health first! I wanted to see exactly what was checked so I prepared to get my hands dirty and joined Mark for the morning!

Inside the Jaguar we pushed every button available to make sure everything worked as it should including all lights, the horn, wipers, handbrake, windows, electric roof, spoiler, electric seat controls and Mark even cleared the phone memory!

Then we ventured under the bonnet where the brake fluid, the coolant level, power steering fluid and drive belts were checked. We had to look in the boot to check the battery and the screen wash!

Then we raised the Jaguar up and took a look underneath, Mark assured me he had never had a car fall off the ramps, but I kept my fingers crossed just in case!!! The tyre tread depths were checked along with; brake pads, discs, brake hose, dampers, drive shafts, exhaust and Mark kept an eye out for any leaks.

Then came the fun part – time for a test drive. The Jaguar needed to be driven to check all the features worked such as cruise control, blind spot indicator and paddle gear shift. While listening out for any strange noises and checking the car could stay going in a straight line! Mark even checked that the sat nav could find us properly and tuned in the radio! Of course the Jaguar had to be driven at high speed to check the traction and wow does the engine roar! 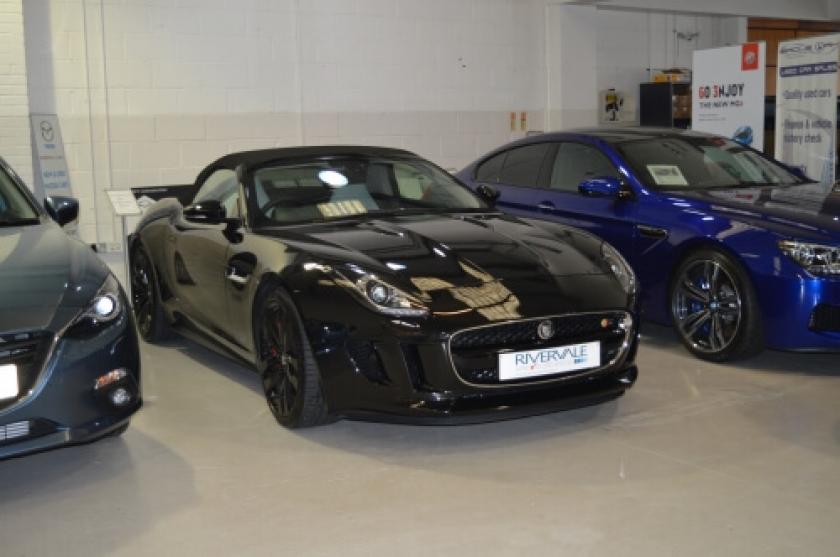 So with a clean bill of health and not a finger print smear in sight the Jaguar made it to the showroom where it is patiently waiting for a new owner…and what did I learn about the ‘tin hut crew’ ? Those boys are really good with their hands!!!!!