In-car infotainment: the system on your dashboard that gives you music, internet, Bluetooth, sat-nav, and lots more when you’re at the wheel. The infotainment industry is predicted to be worth £22 billion by 2026, up from £16 billion in 2019, according to the latest Global In-Vehicle Infotainment Report.

It’s clear the infotainment market is growing rapidly, from augmented reality (AR) sat navs to voice control. We’re even set to have connected shopping services, where you can pre-order a drive-thru dinner from your car, or passengers can play virtual reality (VR) games from the back seat.

But how much of this new technology will UK drivers actually use? We surveyed 1,000 Brits to uncover what we really think about infotainment.

We asked 1,000 Brits if they trust high-tech infotainment to help drivers and found that a huge 6/10 revealed that they don’t have confidence in it.

1/3 admit their vehicle’s infotainment has failed

But why don’t we trust infotainment? Could it be because the technology doesn’t work? Our survey found a 1/3 of drivers admit that their infotainment has failed them.

The 2020 Initial Quality Study by JD Power also revealed that a quarter of complaints from new drivers relate to infotainment, with the top problems coming from:

It’s not just failing infotainment which puts drivers off – many say it’s a distraction, too. Road safety charity Brake reported that 49% of drivers find infotainment distracting and 63% agree that it should be restricted while operating the vehicle.

The same report reveals that most drivers acknowledge that there are more in-vehicle distractions now, with 77% admitting that drivers are more distracted than five years ago. But which infotainment feature is most likely to put you off?

We asked our respondents which advanced infotainment feature is the most distracting. 1/3 of drivers are put off by hands-free games such as mobile quiz apps, while 1/4 say that AR sat navs are the biggest distraction. 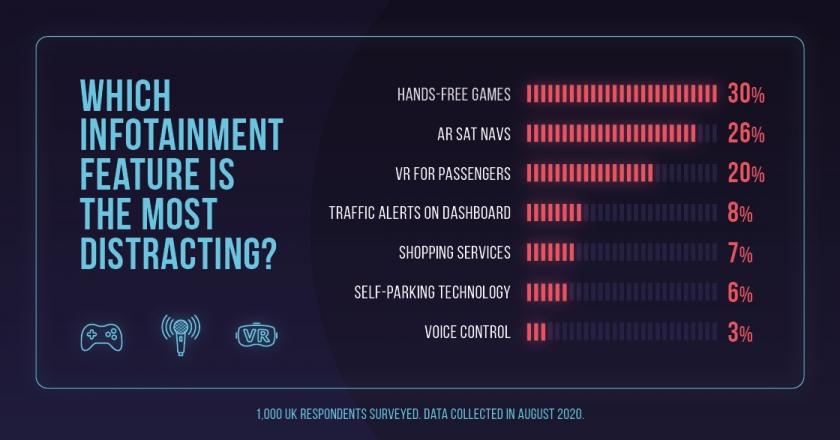 Whether we find infotainment distracting or not, it’s clearly here to stay. The rise of semi-autonomous driving means that companies are more likely to develop new infotainment features to interest drivers. The growing smartphone industry has also had an impact, as it creates many opportunities to integrate social and vehicle connectivity.

But how useful are the latest infotainment features to drivers?

We asked our respondents which high-tech infotainment feature they thought was the most useful. Our survey shows that Brits prefer improved driving support over shopping and entertainment.

37% said that traffic alerts on their dashboard would be the most useful, followed by AR sat navs at 19%. While drivers admitted that AR sat navs can be a nuisance, it seems that many see their potential to be helpful in the long run.

Hands-free games are the least useful (3%), likely because Brits think they’re so distracting. Drivers also don’t seem interested in connected shopping services, where you can order a drive-thru coffee or pre-book a car wash without leaving the driver’s seat. 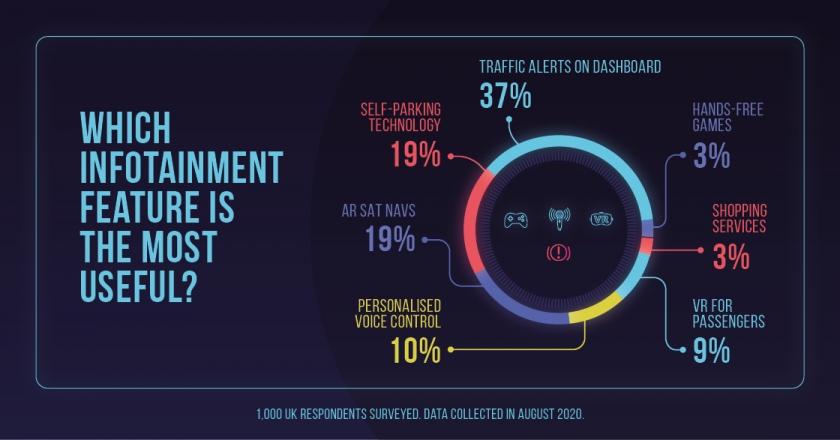 Only 16% of drivers want voice-controlled dashboards

As infotainment develops, the dashboard has changed, too. Voice control systems are now available in many cars, with the likes of ‘Hey Mercedes’, a feature of the Mercedes-Benz User Experience, and Amazon’s Echo Auto.

But our survey shows that Brits aren’t ready for completely voice-controlled infotainment. Just 16% said they prefer hands-free, voice-controlled dashboards. A huge 38% favour the traditional style with buttons, whereas 46% would choose a touch screen.

Find our favourite in-car technology or get more motoring news and research in the Rivervale Leasing blog.