What Vehicles Do the British Army Use?

How many military vehicles are there?

Road legal APC’s like the FV432 and tracked vehicles are often available for sale through specialist markets, so you might spot one on UK roads from time to time. And while you’re less likely to see a tank on the motorway, it isn’t unheard of!

What vehicles do the British Army use?

There are 22 main types of military vehicles used by the British Army. Each type has a unique purpose, but they have all been built with the same three key priorities in mind: firepower, mobility and protection. Read on to discover more about some of the UK’s top military vehicles.

With nearly 900 of these currently in use, this is one of the UK’s top military vehicles. Part of the FV430 family, Bulldog’s excellent mobility makes it ideal for moving personnel safely around the battlefield. It’s designed to protect against artillery fire and small arms. 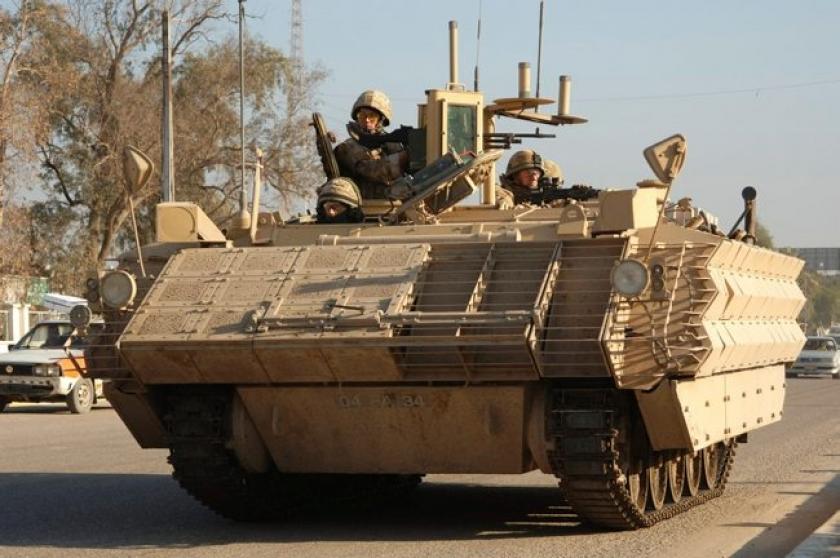 The UK Army’s main battle tank is Challenger 2. First introduced to service in 1994, there are currently 227 in the British fleet. This machine was created with the goal of destroying other battle tanks. Weighing in at a colossal 62.5 tonnes, these tanks have been deployed to operations in Kosovo, Iraq and Bosnia. To date, Challenger 2 has never ‘experienced a loss at the hands of the enemy’. Four crew are needed to operate it - a commander, gunner, loader and operator. It can achieve speeds of up to 59 kph on-road and 40 kph off-road.

The warrior can achieve a top speed of 75 kph, so it’s more than capable of keeping up with the likes of Challenger 2, even in rough terrain. Equipped ready for battle, it can be fitted with enhanced thermal imaging armour to improve its performance during the hours of darkness. This is the second most popular UK military vehicle, with 767 currently in service. 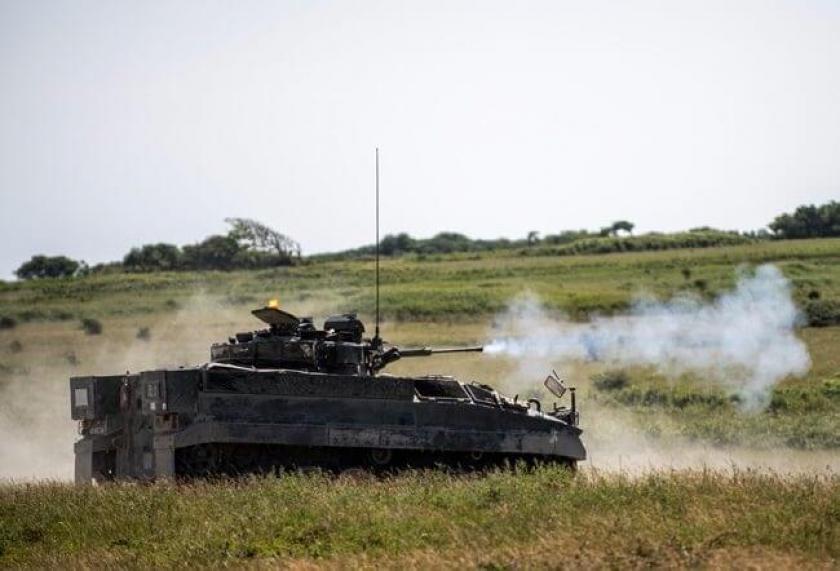 This highly mobile weapons platform is fitted with an airbag suspension mechanism which allows it to move fast whatever the terrain. With a top speed of 80 kph, Jackal 2 offers protection in the event of mine attacks and roadside explosions, Jackal 2 is armed with a general-purpose machine gun. It is able to carry a further grenade machine gun or heavy machine gun.

This light tactical support vehicle is a 6x6 version of Jackal 2. The additional wheels make it a bit heavier, so it can offer useful support to Jackal 2 when transporting equipment and supplies across difficult terrain. Coyote’s top speed is 120 kph and it can carry an extra crew member than Jackal 2. 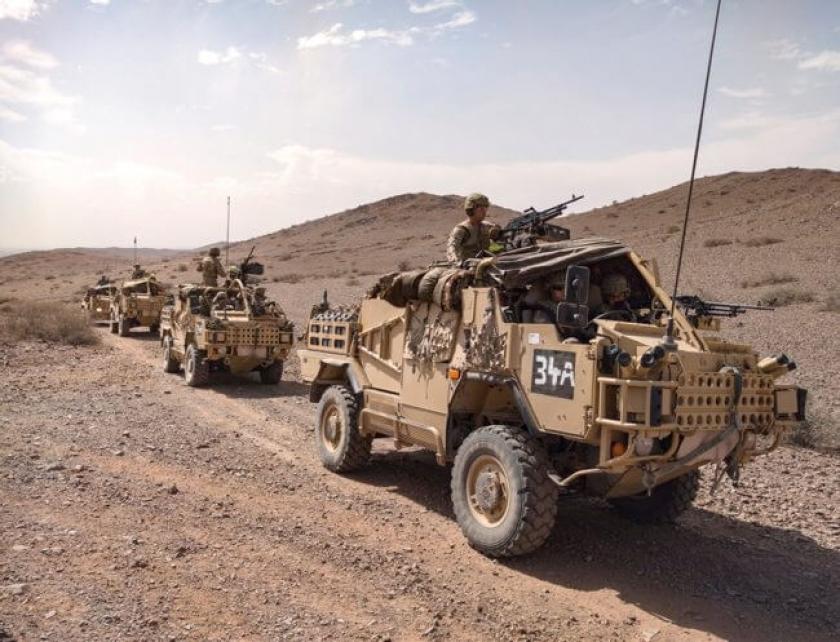 Foxhound is fitted with the most up to date technology for protected patrol vehicles. At first glance, it may appear compact and light, but don’t be fooled - this vehicle offers unbeaten levels of protection. It was designed and built in the UK, but the final stage of the process saw this vehicle being tested in the hot desert conditions of Helmand.

Although it was originally created to protect troops deployed to Afghanistan, Foxhound’s versatility means it is expected to remain an important military vehicle for the future. Foxhound’s v-shaped hull protects crew and passengers in the event of an improvised explosion. It can achieve a top speed of 112 kph.

Mastiff is a 6 x six-wheel-drive patrol vehicle. Fitted with heavy armour, it can carry up to eight troops in addition to two crew operators. Ideal for convoys and road patrols, this is the most up to date protected patrol vehicle currently used in Army operations. It boasts a maximum speed of 90 kph and is armed with state of the art weaponry including machine guns and a grenade launcher.

Designed with a less intimidating profile than military tracked vehicles, the Mastiff offers commanders a broader range of options for addressing threats whilst maintaining a high level of protection. 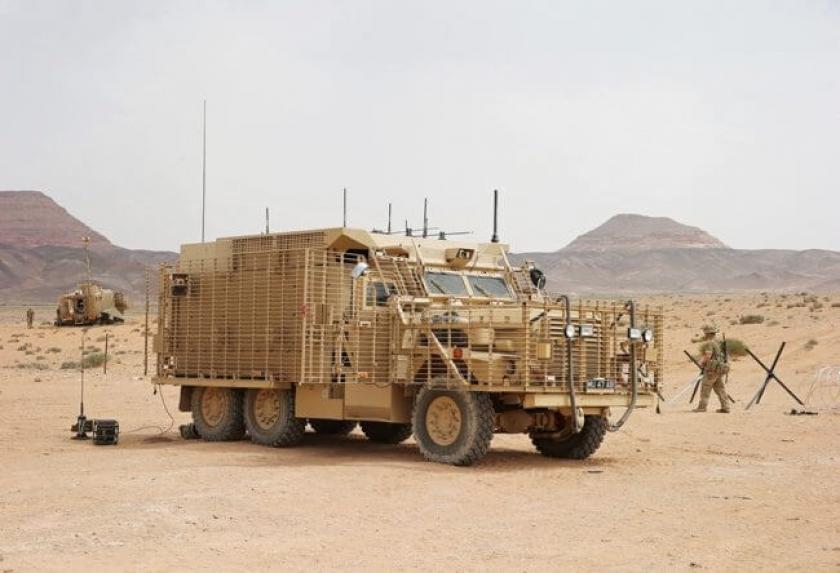 The highly mobile Husky offers a flexible load capacity. It’s used for a variety of different missions, from HQ command activities to the delivery of water, food and ammunition to the troops. Husky is armed with a machine gun and contributes to the tactical support vehicle programme alongside Coyote and Wolfhound.

This 4x4 protected patrol vehicle shares many features with Mastiff. Designed for use in urban environments, this vehicle is available in three variants: ambulance, troop-carrying and command.

Following service in Afghanistan, the Ridgeback fleet is currently subject to a refurbishment programme, with some models being repurposed.

The name of this lightly armoured protected patrol vehicle is an acronym for Revised Weapons Mounted Installation Kit. Highly mobile, this Land Rover provides force protection and fire support and is able to carry a range of weaponry including machine guns. Manned by a commander, gunner and driver, the RWMIK is mobile and powerful with a relatively low profile, making it suitable for many tasks, including convoy escort and reconnaissance duties. 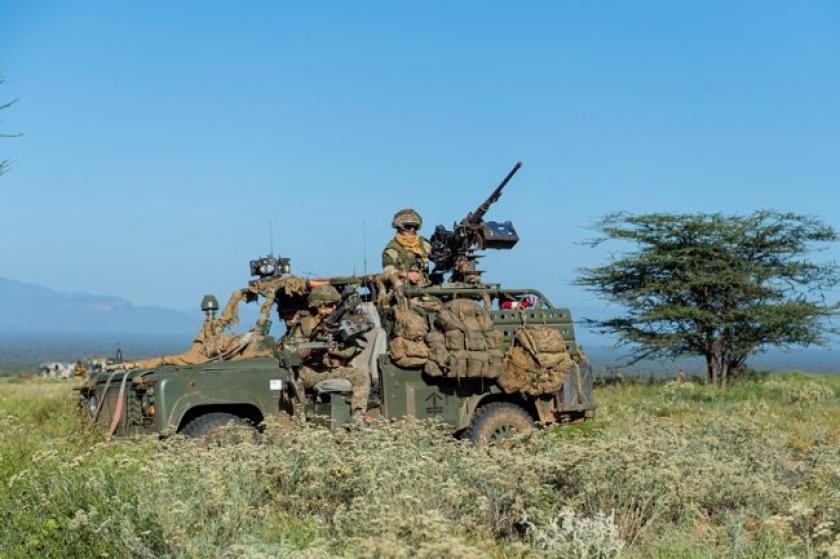 Scimitar is a light tank or armoured fighting vehicle. There are just 181 in the fleet. With a top speed of 80 kph, it performs well in enemy territory where hostile conditions make moving around difficult. The Scimitar's primary self-defence mechanism is a 30mm Rarden cannon, equipped with 201 rounds.

Another type of CVR(T) is Spartan, a very compact APC. Despite being small, it can accommodate up to four people in addition to the three crew needed to operate it. Its main use is to transport specialist teams like the Air Defence section and mortar fire controllers. Other CVR(T)'s include the Samaritan (ambulance), Sampson (armoured recovery) and Sultan (armoured command).