Which Cars Have Been in the Most & Least Accidents?

Since the simple four-wheels-and-an-engine days of the Ford Model T, the number of features and variables for modern cars has gone through the sunroof. Whether it’s brake horsepower, torque, miles per gallon or more recently electric range, there’s no shortage of ranking factors today. But a lot of these arguably distract from the single most important aim of a car – to get us safely from point A to B.

We sent a Freedom of Information request to the Department for Transport (DfT) to find which vehicles were involved in the most and least accidents over the last five years.

Our request asked for the number of vehicles involved in accidents by make, model and accident severity for Great Britain between 2015-2019. We then calculated the rate of accidents per 10,000 models registered to represent each manufacturer and model fairly.

The Vauxhall Zafira has been in the most accidents per 10,000 models 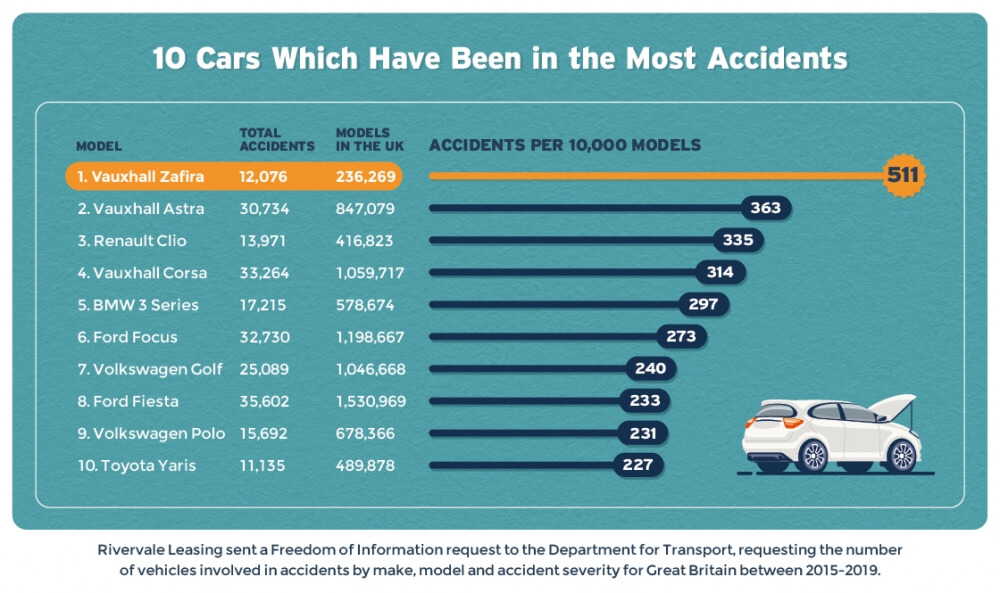 Of course, the more examples of each car there are on the road, the higher the likelihood of an accident. It’s little surprise, then, that the Ford Fiesta and Vauxhall Corsa – the UK’s bestsellers right now – had the most accidents according to the DfT report, each with more than 33,000 total.

But we also calculated the number of accidents per 10,000 models on the road. By this measure, it’s the Vauxhall Zafira that has had the most incidents, with over 500 accidents for every 10,000 models. However, this is likely not related to the Zafira itself as the car rated was five stars for safety by Euro NCAP, with standard features like seat belt reminders and an airbag cut-off switch for children.

The Astra has the second-most accidents by this measure, with 363 accidents per 10,000 cars registered, although this is another model with a Euro NCAP five-star safety rating, including features such as front airbags for the driver and passenger, plus belt pretensioners and side head airbags throughout the vehicle.

Vauxhall, Renault and Peugeot cars have been in the most accidents per 10,000 models 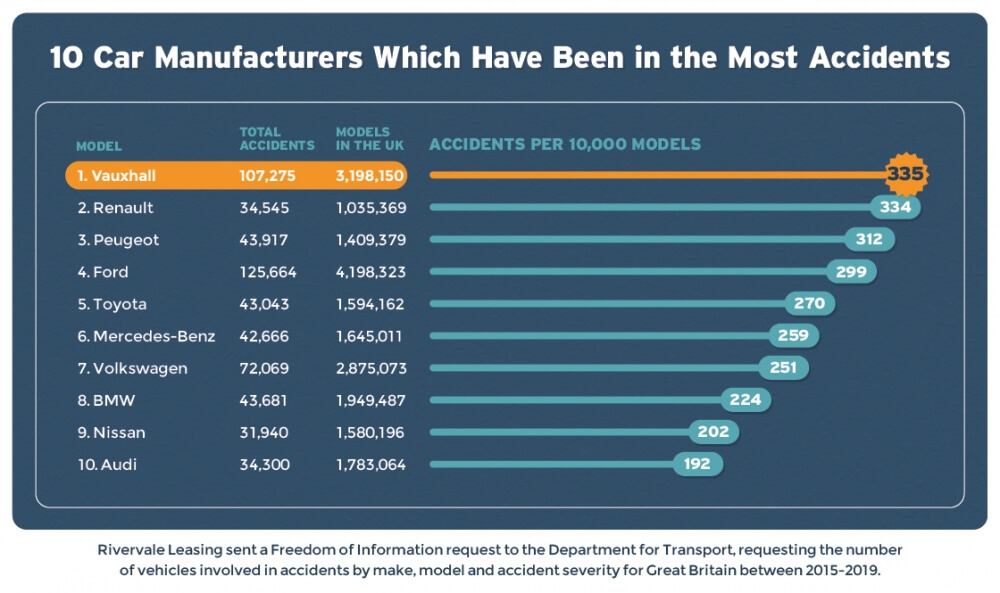 Which car manufacturers have been in the least number of accidents per 10,000 models?

Manufacturers which did not have more than 10,000 models registered were not included in this study.

What should I do if I’m in an accident?

Browse Rivervale’s news and reviews for more automotive insight, opinion and guides, including what to do if you’re hit by an uninsured driver. Get in touch today on 01273 433 480 or request a callback for a time that is convenient for you!

Rivervale Leasing sent a Freedom of Information request to the Department for Transport, requesting the number of vehicles involved in accidents by make, model and accident severity for Great Britain between 2015-2019 and totalled the figures for each manufacturer and model. The DfT additionally advised, ‘To prevent the risk of identifying individuals a percentage risk was calculated (number of accidents/number of licensed vehicles). Vehicles were excluded from the data provided if there were less than 100 vehicles licensed and the percentage risk was greater than 10%.’