Are Autonomous Vehicles Going to Catch on?

Are we ready for autonomous vehicles? More importantly, are they here to stay? Here’s a rundown of what you need to know when it comes to driverless cars.

Is the world ready for autonomous vehicles? It would seem so. While autonomous, or self-driving cars, were only the realm of giants like Uber and Tesla just a few years ago, they’ve now gone mainstream.

With players like Ford and Volvo getting in on the action (even the UK government!) it looks like we’re well on our way to making driverless cars a reality. But, is the road ahead a smooth or bumpy one? Furthermore, what exactly makes a vehicle ‘autonomous’, and how does it all work? Read on to find out more.

The levels of automation explained

First things first, autonomous vehicles fall into different categories, depending on how automated they are. By ‘how automated’ we mean how much stuff the car does itself versus how much the driver (human in this case) still needs to do. In fact, there are six levels of automation:

Level 0: Pretty much your bog-standard vehicle. Cars at this level feature no automation whatsoever - they simply answer to their human masters.

Level 1: A bit of teamwork happening here. Essentially, the car and driver work together (with the driver still doing most of the heavy lifting). Automation at this level involves assistance modes.

Level 2: Ok - this is where things get interesting. At level 2, the speed of the vehicle and steering are relegated to one (or more) assisting systems. The driver takes care of the rest. In a nutshell, it’s the ‘Look Ma, no hands!’ stage.

Level 3: Vehicles at this stage are substantially automated. Cars in this bracket can ‘see’ the environment around them. They can also start to make decisions based on this. Of course, the human still needs to hang around (in case anything goes wrong).

Level 4: Cars at this stage can do everything before and also ‘self-correct’ if something goes wrong. If you’re AI weary, it’s not quite Invasion of the Robots yet...but start packing all the same!

Level 5: The machines have pretty much taken over. At this point, no human oversight or control of the car is needed. This is driverless in its purest form.

Anatomy of a driverless car

If driverless cars are no longer a figment of sci-fi imagination, then how do autonomous vehicles work?

In reality, there are a number of onboard systems that work together to control the vehicle. First, there are radar sensors dotted all over the vehicle. These keep an eye on the movements of passing and nearby vehicles. There are also special lidar sensors. These identify road edges and lane markings. They do so by bouncing light off the car’s surroundings. In addition to these sensors, there are video cameras that can read road signs, traffic lights and also keep track of nearby pedestrians and vehicles (wow!). Even wheels are equipped with ultrasonic sensors that can pinpoint the positions of things that are static. 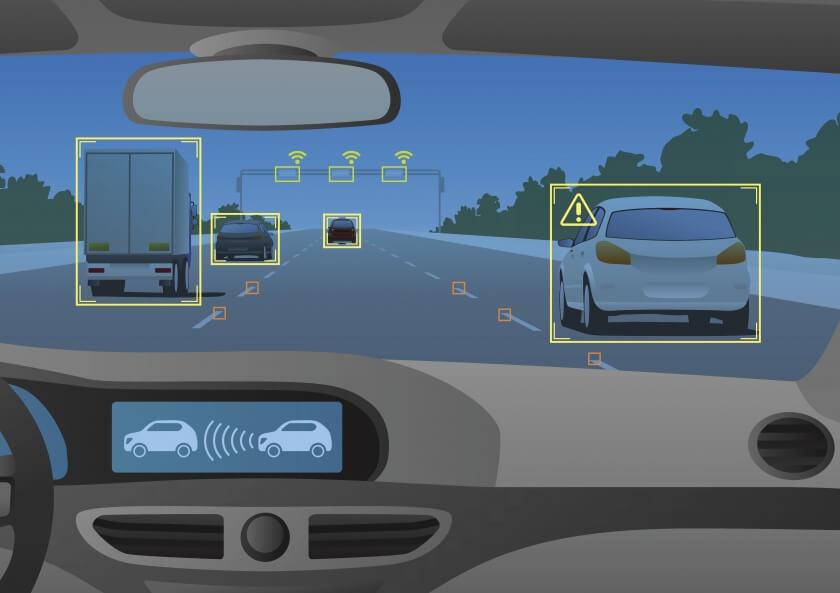 These cameras and sensors gather all sorts of data points. They’ll then pull everything into a central onboard computer system (the motherboard or ‘brain’ of the car, if you will). This brain will then interpret the information and use it to accelerate, slow down, steer, brake, then accelerate again, slow down...well, you get the point.

Hang on a minute...are they safe?

By this point you may be thinking: ‘are autonomous cars safe’? That is, of course, the golden question. And one that’s been largely debated among scientist and transportation specialists worldwide.

According to a report conducted by KPMG for the Society of Motor Manufacturers and Traders, driverless cars could save roughly 2,500 lives by preventing 25,000 on-road accidents before 2030. This stat will likely become even greater the more self-driving vehicles are manufactured and hit our motorways.

However, a number of experts believe there are still considerable risks ahead. And, of course, Uber suffered that critical setback when one of their driverless vehicles was involved in a crash that ended fatally in Arizona. This was followed by another accident involving a Tesla on Autopilot mode.

It's worth noting that in Q3 2019 of Tesla's safety report, they registered one accident for every 4.34 million miles driven where Autopilot was enabled. In comparison, NHTSA's most recently published data shows that in the United States, there is an accident every 498,000 miles driven.

Other concerns raised include sensors being obstructed by heavy snow or rain, the complexities surrounding configuring cars for different international road markings and signage and also the danger imposed by (ahem!) us humans. After all, we are a confusing bunch! Indeed, there’s a high chance of an autonomous vehicle getting perplexed by ‘illogical’ human behaviour.

Driverless cars are just around the corner

If it still feels like driverless cars are a distant dream in the future, we’ve got news for you...you may have already passed one on your way to work!

Currently, technology firm Oxbotica is trialling five fully automated cars around London. The vehicles are currently collecting data that can be shared at scale down the line when whole fleets of driverless cars take to the road.

If you think that’s astounding, then wait till you hear what the Department of Transport has in store. The government body would like to see fully autonomous vehicles driving on UK roads by 2021. An ambitious target, yes, but one they may very well attain if testing keeps up.

So, how much will a fully autonomous car cost (especially if you’re keen on driving one)? That depends. For one, the technology required to make a vehicle fully-autonomous isn’t cheap. When it comes to semi-autonomous features already out on the marketplace - such as Cadillac’s Super Cruise and Tesla’s Autopilot - there’s already an additional $5,000-$10,000 (roughly £4,000 - £8,000) added to the ticket price. Going by that, you could see as much as $100,000 (£78,000) being added to the price of a fully autonomous vehicle.

So, is the future is autonomous?

Well, that’s still to be determined, especially with safety concerns in mind and the cost of initial models. But the uptake from car companies and government bodies in developing fully autonomous vehicles shows that we’re firmly on the road to a world more driverless.

If autonomous vehicles catch on, would you be happy to be driven by the car, or would you want to drive manually?