The new Audi A4 is on the way!

The new Audi A4 has arrived with mild-hybrid tech, new engines and improved exterior and interior styling.

The Audi A4 is one of Audi’s most popular models to date, with almost 7.5 million of them sold worldwide. Audi has decided to give the Audi A4 a facelift with a range of updated engines and exterior and interior tweaks. The A4 goes up against rivals like the BMW 3 Series, Mercedes-Benz C Class and the much improved Jaguar XE.

Exterior features of the Audi A4

From the outside, the new A4 shares very few similarities to the previous, fifth-generation A4. In fact, only the bonnet, boot and roof have been carried over from the old model. 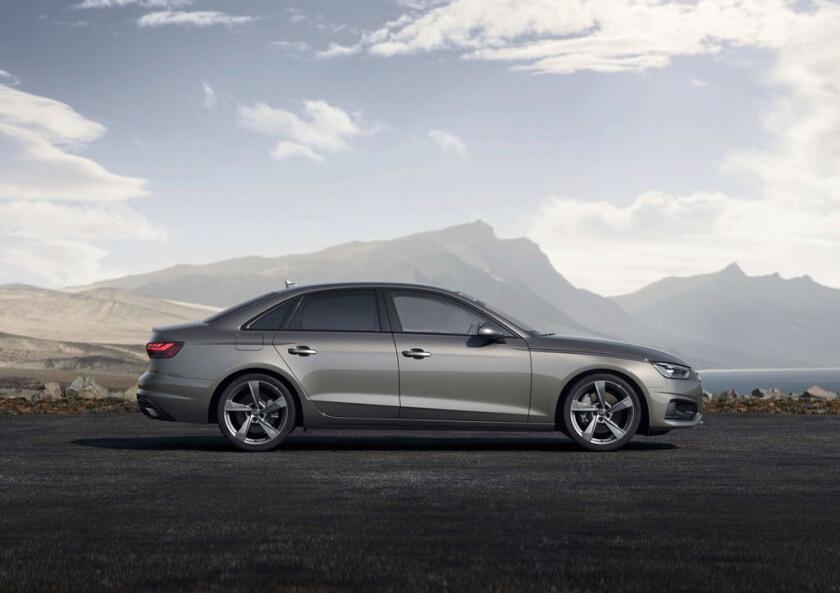 The major updates however come from the front end. There are larger air intakes cut into a new bumper, as well as a broader and flatter front grille, which is purposely designed to make the car look wider. It has a different look depending on the trim level, too, with SE and Sport getting horizontal slats, while the Allroad, S line and S4 variants get vertical chrome slats. 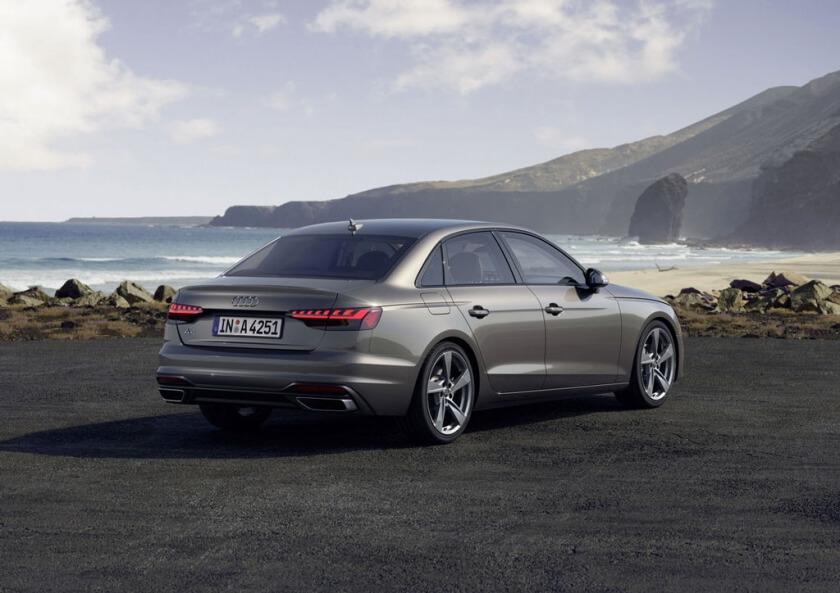 LED headlights now come as standard on all trim levels. At the rear, there is a new bumper and new rear light clusters. Plus, extra creases have been included above the wheelarches to give the A4 a more aggressive profile. The new A4 is 5mm wider and 22mm longer than the previous model.

Audi A4 interior and technology features

Jump inside the new A4 and you’ll see many of the same interior features used in the older model. One noticeable difference compared to the older model is the larger, 10.0-inch infotainment system that’s perfectly integrated into the dashboard, and can be operated by voice, steering wheel controls or touchscreen. 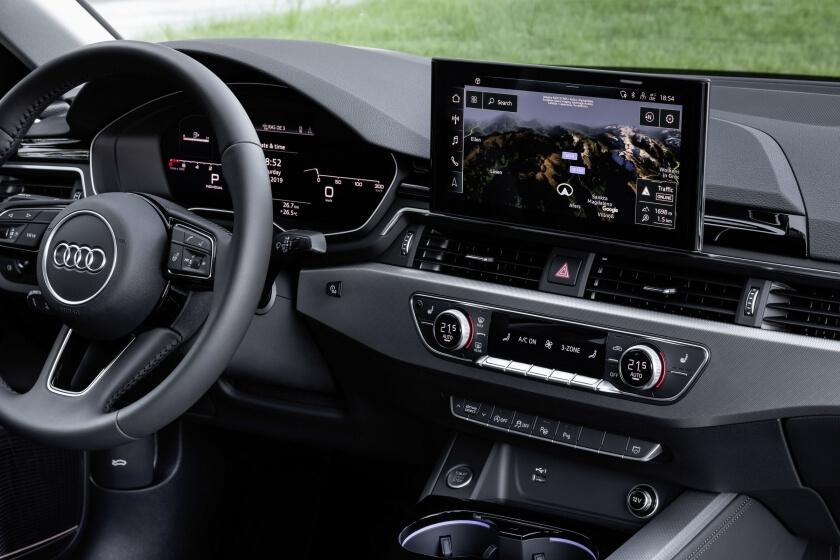 There’s also a new Virtual Cockpit digital display for the dials including a range of option packs in case you wish to further upgrade the interior. These include a Bang & Olufsen premium sound system and an ambient lighting package. DAB radio, Bluetooth, built-in sat-nav and Apple CarPlay and Android Auto come as standard across the range. 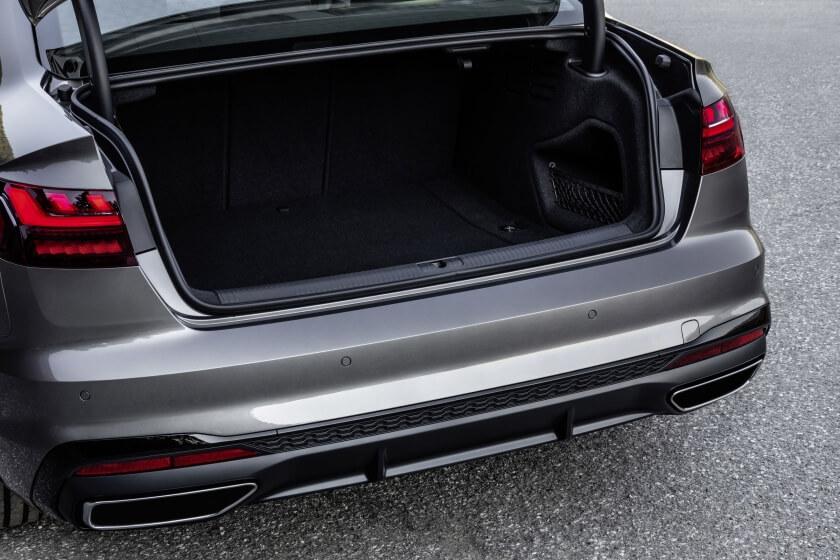 If it’s ride quality that you’re after then look no further than the A4. The front seats offer exceptional comfort and there’s plenty of headroom and leg room. You can make adjustments to your seat for added comfort and security. Space in the back is much the same to the front. Two six-foot-tall passengers can easily fit behind the front seats and there’s more headroom than in the C-Class and Jaguar XE. Like the C-Class and 3 Series, the A4 has a generous boot capacity of 480-litres, which is more than enough space to fit a pair of golf clubs or a large push chair for babies.

The biggest change to the revised Audi A4 are the range of updated diesel and petrol engines. The Audi A4 also comes fitted with 'mild-hybrid' technology. Basically, what this means is that the mild hybrid moto attempts to assist the engine rather than power the car on its own, hence the term 'mild'.

Here are the diesel offerings;

All of these engines are capable of retuning up to 60mpg. If diesel buyers want an A4 with a bit more speed, they should opt for the 40 TDI. It is refined, quiet, great for longer journeys and has a more effortless performance compared to the other diesels offered. With that said, the 163hp 35 TDI is also another option that offers decent torque and performance, whilst also being equally refined and quiet as the 40 TDI engine.

If you prefer petrol, here’s what you can choose from;

The 35 TFSI will sprint from 0-62mph in about 9 seconds, while the 40 TFSI will do it in closer to 7 seconds. Both of these engines will feature a 12-volt mild hybrid system to allow energy to be regenerated when the car is braking, coasting, or comes to a halt, to boost efficiency and give them a fuel economy of close to 50mpg.

The updated high performance S4 sits at the top of the A4 range alongside the regular A4 Saloon and Allroad versions. It has a 347hp turbo 3.0-litre diesel engine combined with a 48-vold mild -hybrid system. Audi says that the S4 will reach 62mph in 4.8 seconds and claims a top electric speed of 155mph. 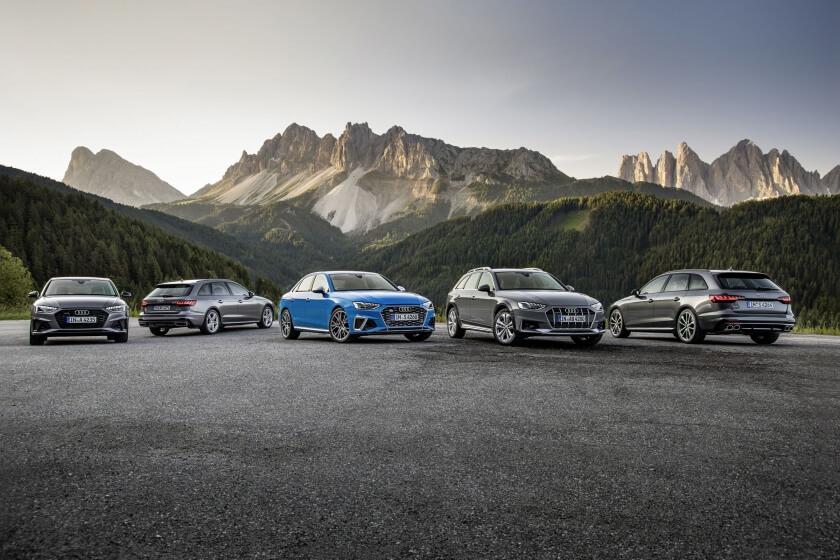 If you would like to discuss Audi A4 leasing prices with an Account Manager - give us a call on 01273 433480 or request a callback today.