As the UK government is set to end new petrol and diesel sales by 2030, the switch to electric vehicles (EVs) is getting closer. But so far in 2020, petrol and diesel cars account for three quarters of registrations, suggesting the UK isn't ready to make the change to EVs.

We asked 1,000 Brits to tell us how they really feel about electric cars and found that UK drivers won’t switch because they think EVs are expensive, limited on charge points and have a poor range.

But is that true? Our data also reveals that many drivers don’t think EVs have changed over the past 5 years. See the results below as we challenge common misconceptions about electric cars.

Read More: Hybrid or Electric - What's Best For Me?

What’s putting the UK off electric cars? We asked 1,000 British drivers to tell us why they wouldn’t switch to an EV. 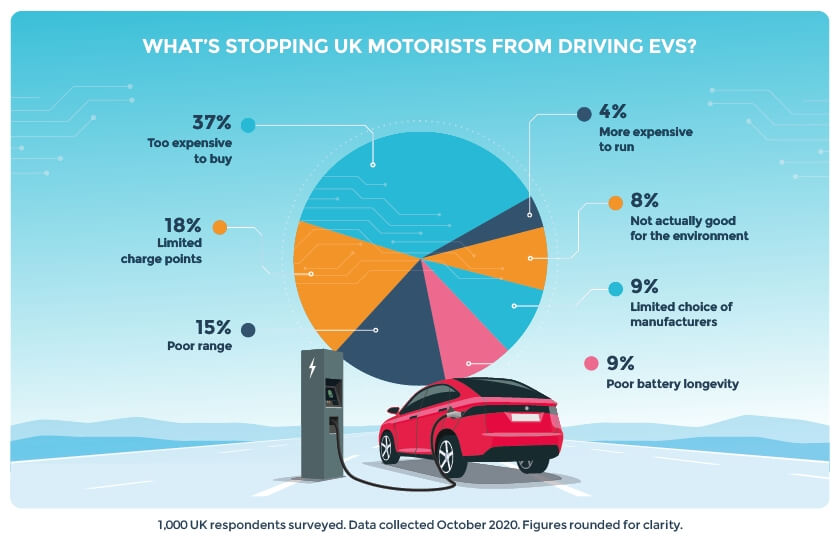 But these supposed disadvantages aren’t necessarily true. Our findings suggest that EVs are misunderstood, or drivers aren’t up to date with how they’ve changed over the past few years.

Most drivers (37%) think an EV is too expensive to buy. It’s true – most electric cars are pricier than combustion engine vehicles when paying upfront. But statistics show that 90% of new cars are financed, so the expensive initial cost only affects 1 in 10 drivers who purchase their vehicle outright.

Electric cars have been shown to be cheaper to run, as the monthly costs are less than the equivalent petrol version, which could save you an average of £107 a year.

Shockingly, 2 in 5 drivers aren’t aware that EVs are a lot cheaper to run, believing that petrol or diesel cars are cheaper to fuel than electric. According to EDF Energy, it would cost £10 per 100 miles to fill up a petrol car. However, it would only be £4 per 100 miles for an electric alternative, making it a much cheaper option.

Read More: What to Consider When Switching to an Electric Vehicle

As 1 in 5 (18%) say they wouldn’t drive an EV because there are limited charge points, we wanted to know if this was just a misunderstanding. It turns out that a total of 64% believe there are fewer than 20,000 UK charge points, when there are actually 34,000.

What’s more, 1 in 3 (29%) drivers’ perceptions are wrong, believing we have only 10,000 charge points – that’s how many we had back in 2015. If that was true, it would equal just 1 charge point for every 16 cars. In fact, the UK has more than tripled this number of charge points in the past 5 years. 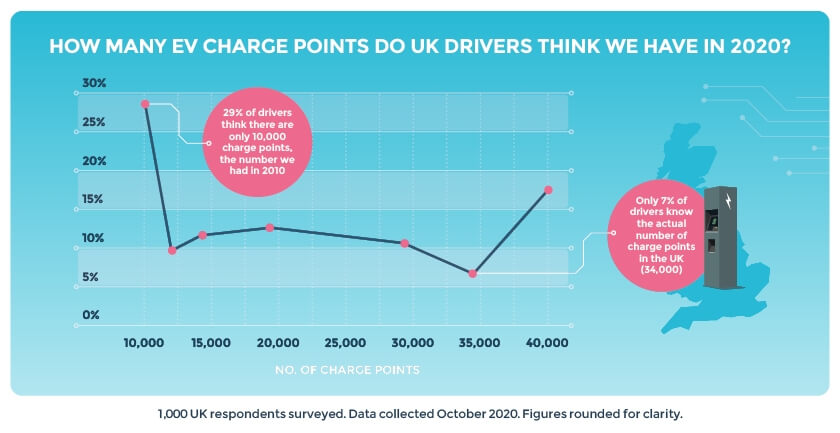 Just 7% of drivers know how many charge points we have in the UK, suggesting that limited charging access isn’t a problem and is actually a misconception.

Poor range is the third top reason why Brits won’t drive an EV (15%), but range anxiety isn’t as serious as you might think. The average car journey in the UK is 8.4 miles long, which is covered by even the smallest EVs. Plus, there are over 30,000 charge points if you ever need to top up.

Today, the average range of a battery electric vehicle (BEV) is around 200 miles. Our survey shows that 2 in 5 drivers (37%) believe that the average BEV can only go between 50-149 miles on a single charge. That would be true – if we were talking about the average BEV range from 5 years ago. 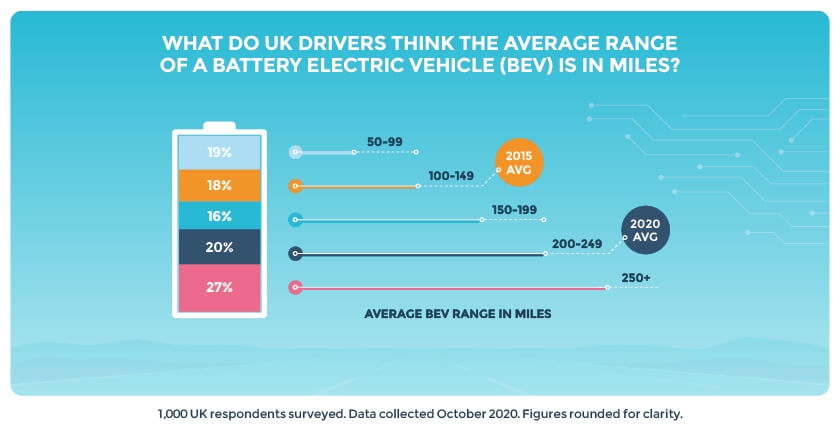 Perceived poor battery longevity is another reason why 1 in 10 UK drivers (9%) won’t drive an EV, but this seems to be another misconception. Our results show that a huge 85% in total think that an electric car battery needs to be replaced between 3 and 10 years.

In truth, it’s closer to every 14 years, which only 3% of drivers are aware of. 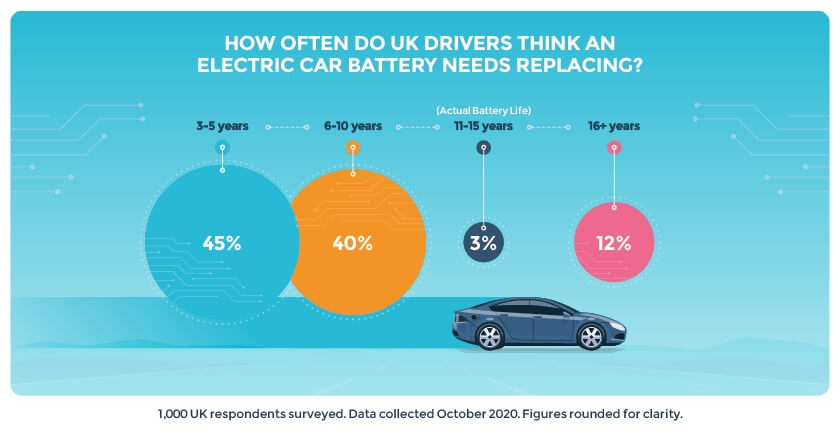 The average UK motorist drives 7,400 miles a year and an electric car battery generally lasts for 100,000 miles, so it would take around 14 years before needing a replacement. Plus, many vehicles are only on the roads for 8 years, so you might never need to replace an EV battery.

Another 1 in 10 drivers (9%) believe that there is a limited choice of EV manufacturers available. However, 40 manufacturers are currently producing electric cars, including well-known brands like Tesla, Audi, Mercedes-Benz, Ford and Volkswagen.

Regional data shows Leeds, Manchester and Bristol have the most negative EV view

We investigated the sentiment of 1,237 Tweets recorded from January to October 2020 to find out what the UK really thinks about electric cars. Our Twitter data shows that most of the UK (45%) does have a positive attitude towards EVs, but 1 in 4 (24%) disapprove.

Looking at the top 15 cities, Liverpool is the biggest EV fan, with 68% feeling optimistic about electric cars. However, there are cities which have a more negative outlook. 1 in 3 drivers in many locations aren’t as enthusiastic about electric cars, with Leeds (35%) coming out as the most negative city, followed by Manchester (34%) and Bristol (33%). 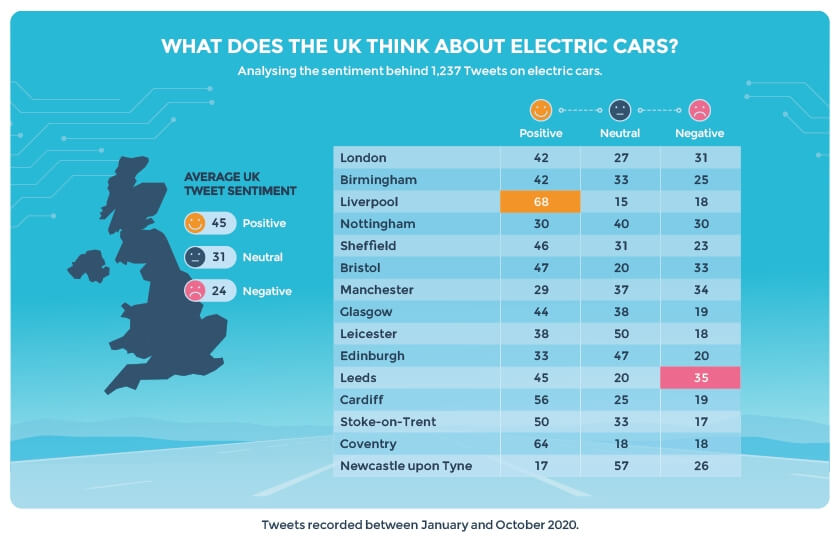 Learn more about switching to an EV or see our electric car lease deals available now.