With rising fuel costs, insurance premium hikes and the eye-watering price of parking, the pleasure of driving doesn’t come cheap.

But how much are Brits spending every year? We researched the average cost of insurance, fuel, parking, tolls, repairs, servicing and road tax in the 50 most populous areas of the UK.

The data reveals that British drivers spend a huge £3,800 per year, on average – and that’s without buying the car itself.

Read on for the full breakdown of our research as we uncover the cheapest and most expensive places to drive a car.

City of Westminster is the most expensive to drive in, costing £8.7k per year

It’s no surprise that the London borough is the most expensive place to drive in the UK at £8,722 per year – that’s £4,922 more than the average.

A large chunk of this comes from the London Congestion Charge, costing £15 a day to drive through the capital’s busiest areas.

But even without the Congestion Charge, the City of Westminster is still the most expensive place to drive in. It’s also the priciest place to park overall, costing a huge £3,684 each year. 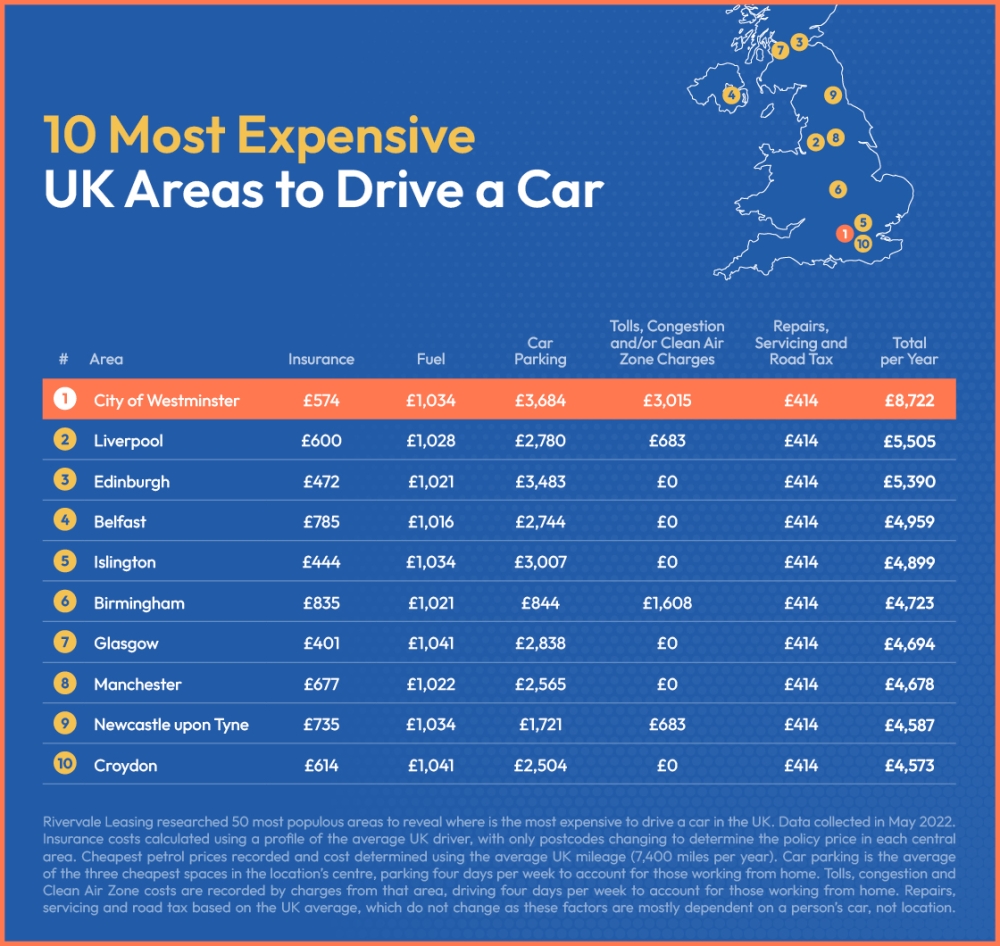 Commuters in Liverpool won’t be happy to hear that it’s the second-most expensive city in the UK to drive in, costing £5,505 per year, including a whopping £2,780 on parking and £600 on insurance, on average.

Our research also shows that drivers who travel through the Mersey Tunnels will pay £683 per year when travelling to the city centre four days per week (accounting for one day working from home).

Parking in Edinburgh city centre will seriously set you back, costing a massive £3,483 per year – higher than any other area, bar the City of Westminster.

Outside its pricey parking, however, we also found that Edinburgh’s insurance prices aren’t so high compared to other areas at £472, and there are no major tolls to pay.

But if you do want a spot in the city centre, you’ll need to fork out. The huge cost of parking means that Edinburgh is the third-most expensive city on our list, costing £5,390 annually.

Leicester revealed as the most expensive city for insurance, setting you back £955

Breaking down the data, we looked closely at average insurance prices across the UK. We found that Leicester is the most expensive city overall, costing £955 per year on average. 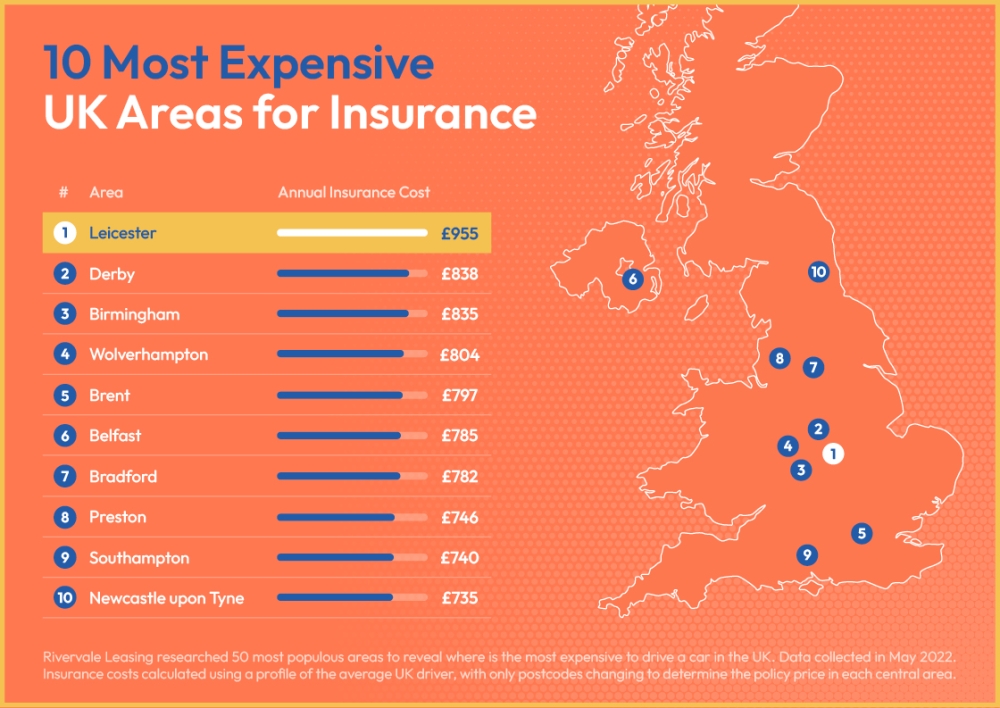 Commuters who want to cut back in the City of Westminster, Edinburgh and Islington might want to consider car parking costs. Drivers could be spending over £3k to park in these areas each year, with a huge £3,684 in Westminster, £3,483 in Edinburgh and £3,007 in Islington. 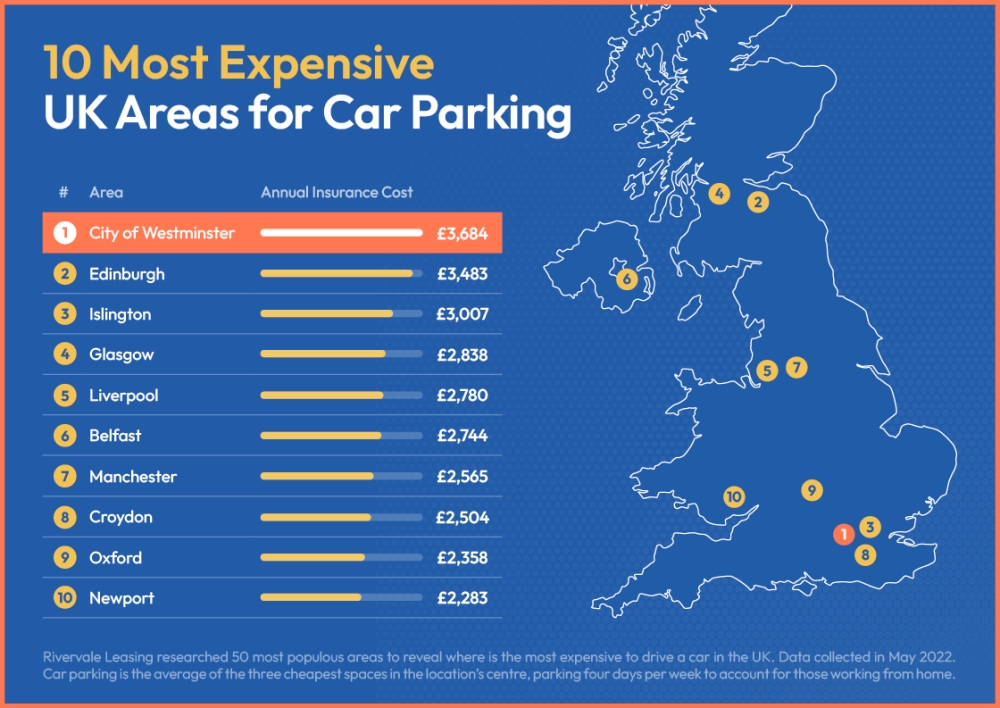 From toll roads and tunnels to the latest Clean Air Zone charges, some will have to shell out more than others to drive within the UK road network.

We researched the charges from toll roads, bridges and tunnels, London’s Congestion and ULEZ zone, plus Clean Air Zones to reveal how much drivers spend each year. Our calculation considers Brits working four days per week in the area’s centre and one day working from home.

Thanks to the London Congestion Charge, the City of Westminster is the most expensive area at a whopping £3,015 per year. Birmingham follows, thanks to the newer Clean Air Zone charge, totalling around £1,608 annually. 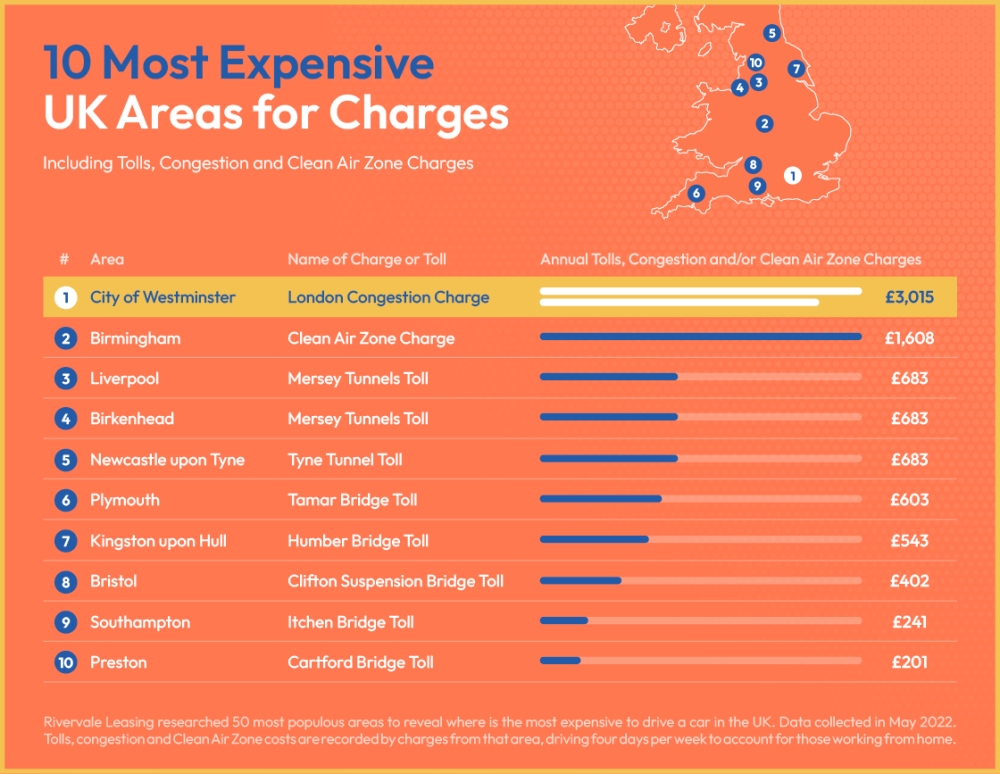 It’s not all doom and gloom for drivers, though, as we can also reveal the cheapest places in the UK. 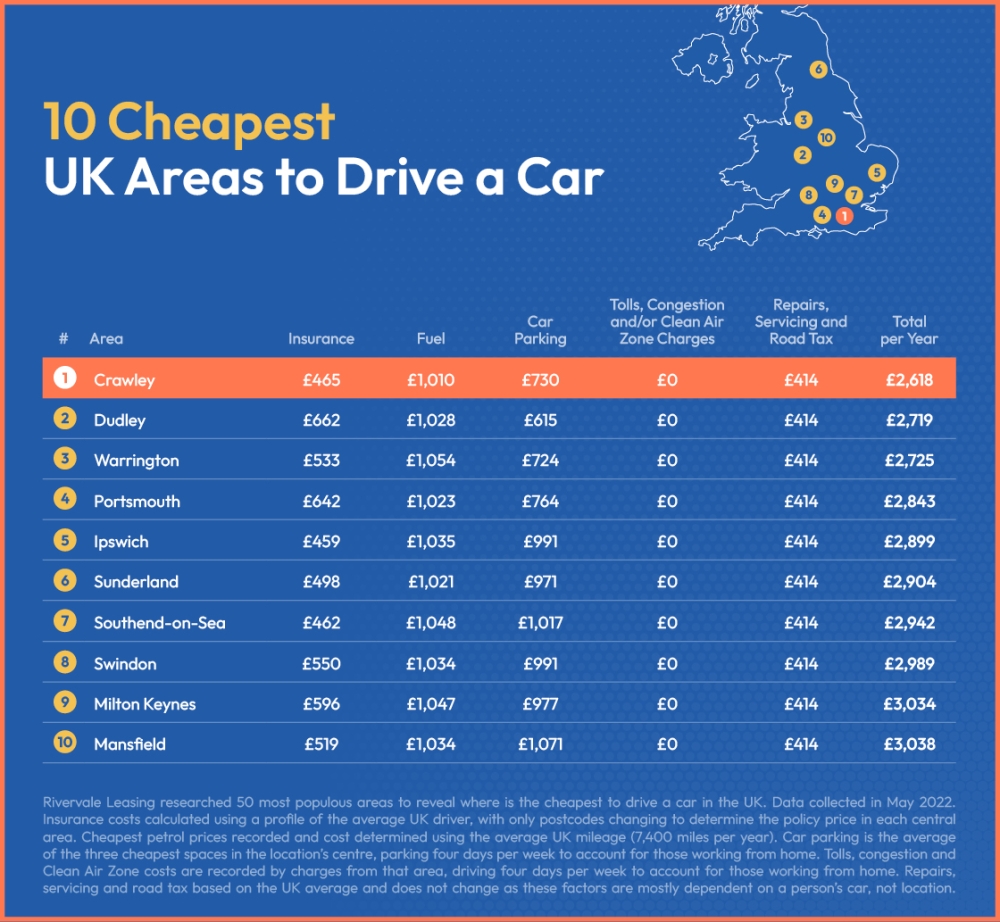 Coming second overall in our study, we found that the market town of Dudley costs only £2,719 to drive in. It’s also the cheapest place to park, costing only £615 annually to leave your car in the centre on weekdays.

Find more motoring studies and news in the Rivervale blog, including advice on the rising cost of fuel plus the cheapest cars to insure.

Why not browse our latest car leasing offers and find an affordable deal on your next brand-new car?

We researched the average cost of insurance, fuel, parking, tolls, repairs, servicing and road tax in the 50 most populous areas of the UK.

Insurance costs were calculated by collecting quotes using a profile of the average UK driver. The only factor which changed while researching insurance quotes was the driver’s postcode to determine the policy price in each central area.

The cheapest petrol prices were recorded and cost determined using the average UK mileage of 7,400 miles per year.

Car parking costs were calculated using the average of the three cheapest spaces in the location’s centre according to JustPark. This was based on parking four days per week to account for those working from home, based on Office for National Statistics data.

Tolls, congestion and Clean Air Zone costs are recorded by charges from that area according to the RAC, driving four days per week to account for those working from home.

Repairs, servicing and road tax are based on the UK averages, which do not change as these factors are mostly dependent on a person’s car, not location.