The Value of Britain's Most Popular Car Colours

Revealed: UK's Most Popular Car Colours Could Lose You up to £6.8k

Are the most popular car colours leaving us out of pocket? We compared the price of 21,000 cars being sold online to see how the colour of paint can affect your car’s value. Grey remains Britain’s most popular car colour, according to the latest SMMT data, with 397,000 new registrations in 2020. Black comes in second place with 324,000, followed by white at 283,000 and blue at 276,000. To show you the scale of these numbers, we visualised the UK’s choice of car colours from 2015 to 2020. 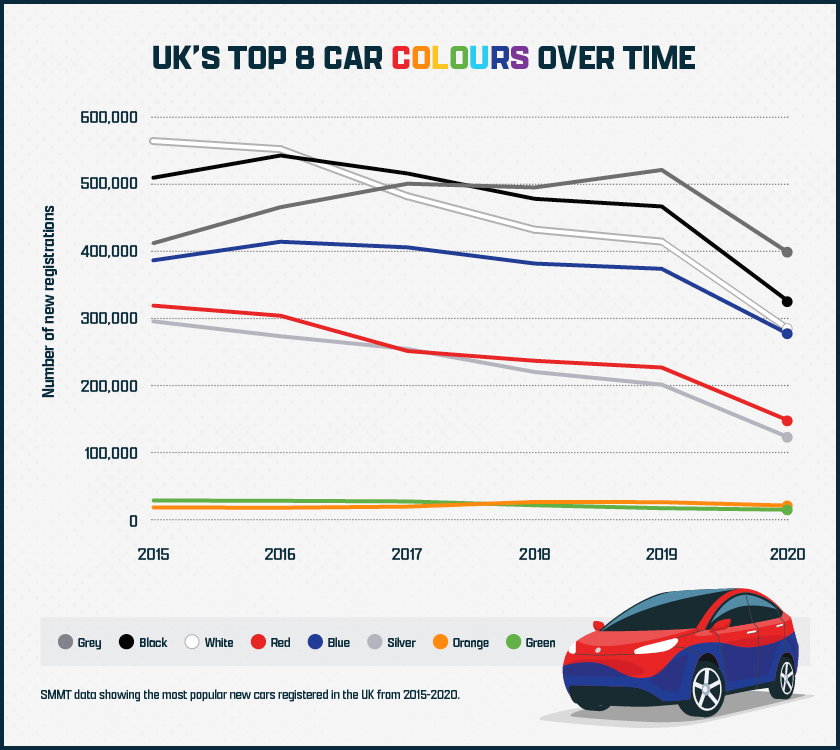 Our study shows that black and blue cars sell for the lowest amount, when compared to the average £10,050 sale value of all 21,000 cars analysed. While it’s a very common colour, black cars are shockingly 68% less valuable when selling, which could mean losing out on £6.8k. The data also shows that blue cars, our third most popular, drop in value by 30% or £3k, on average.

Brits with the most popular choice aren’t affected as much, although grey cars still may result in a negative resale value. We found grey cars to be 14% less valuable, or a loss of £1.4k. 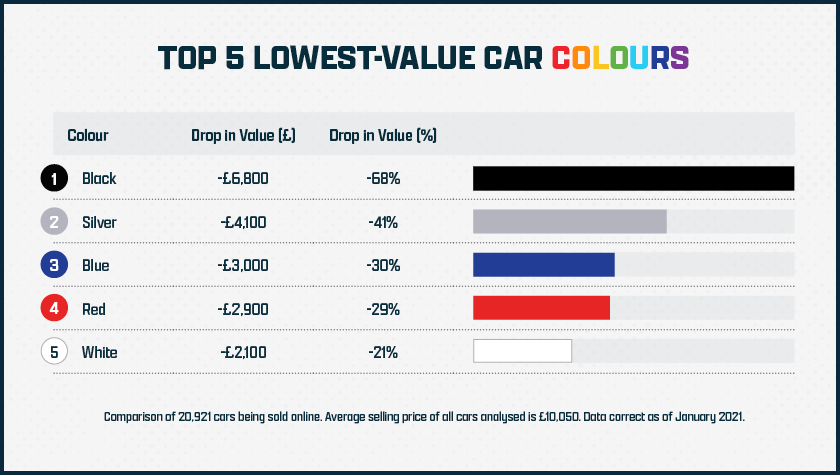 Cars that go for gold have a 4.5x higher resale value than black

DVLA data suggests that gold is number 13 on the list of the UK’s most popular car colours, which might be unlucky for some, but not when it comes to selling. Our research reveals that the highest-value car colour is gold, with an average resale price of 46% more than the average, or £4.6k. Compared to black cars, gold paint results in a 4.5 times higher resale value, even though much fewer Brits choose to drive a gold car.

See the top five car colours with the highest resale value below – you might be surprised to see some of the least popular colours among them. 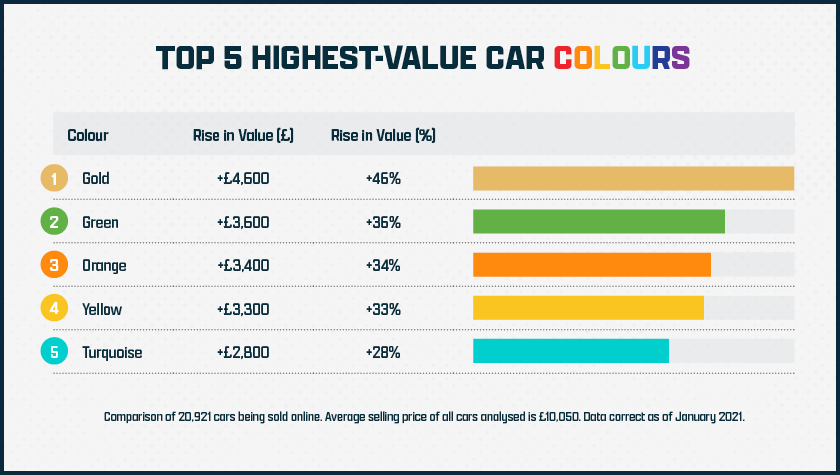 Unpopular colours could net you up to £2.8k more when selling – except pink

Comparing the top five least popular car colours – multicoloured, pink, maroon, turquoise and bronze – our analysis shows you could get up to £2.8k more when it comes to selling.

The only one of these unpopular colours which results in a loss is pink, which is infamous for limiting a car’s appeal, after Katie Price’s Range Rover ‘wiped £3,000 off its value’ with a pink paint job, according to HPI.

Drive a yellow Merc? Get up to £38k more than any other colour when selling

When looking at manufacturers and their colour options, yellow Mercedes-Benz cars prove to be the most lucrative in our study. Drivers could get up to £38k more than the average selling price of a Mercedes if they have a yellow model.

Things also look bright if you have a gold Audi or a multicoloured BMW. Both car colours could net you around £21k more than other models made by the manufacturers.

See our visual below as we reveal 20 manufacturers and their highest-value paint colours. 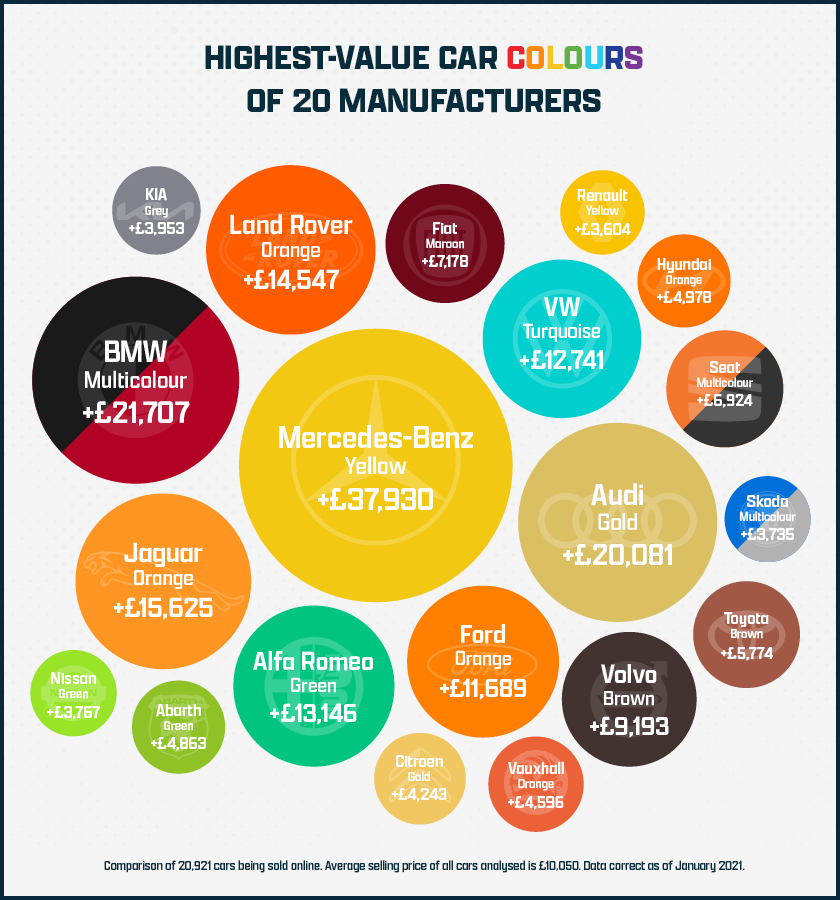 Unsurprisingly, as black proved to be the least valuable colour overall, it’s the same result for 75% of manufacturers. We found that the lowest-selling colour from 15 out of 20 brands was black. For those that weren’t, here are the colours you might need to avoid.

Why do Brits choose the same car colours, even if they are less valuable?

‘There are many reasons why we might prefer minimalist car colours, like wanting the exterior and interior to match. If your dashboard and seats are neutral, you want the outside of the car to complement them. We also might pick certain colours purely because they’re more popular historically.

‘However, as so many more cars registered are grey, black or white, there are of course going to be more of these coloured cars up for sale. This could affect the selling price, as there are lots of models available. Drivers who are in the market for an unpopular colour have less choice, so might have to pay more to get the car they want.’ - Bud Johnston

The psychology of car colours explained

We asked psychologist Lee Chambers to explain more about the meaning of car colours.

‘The psychological reasoning behind car colour has been considered for years, and with good reason. When you look at the popular colours, grey, black, and white, they are conservative. When driving, we want to make our journey seamless and safe, and these colours are less likely to trigger attention and other road users.

‘The least popular colours would all be labelled as unconventional. For example, pink is a bold statement colour. When added to the cultural consideration as a colour of femininity and pampering, it's appeal as a vehicle colour is niche at best.’ - Lee Chambers

Get more news and advice in the Rivervale blog, including more statistics on what your car’s colour says about its history. If you’re thinking of selling your car and don’t want to think about depreciation value any longer, why not consider a car lease? Call today on 01273 433 480 or request a callback for a time that is convenient for you!

We analysed 20,921 seller listings on Auto Trader to find the average selling price of all cars to be £10,050. This data was broken into 18 car colours with an equal number of cars recorded per colour (1,300), except in cases where the colour of cars was fewer than this number. In this instance, the maximum number of listings was recorded, including pink (682), turquoise (520) and maroon (233).