Ahead of the car’s first outing at the Munich Motor Show, Cupra has released the first official images of its new model, the UrbanRebel.

Formerly known as SEAT Sport, SEAT Cupra SAU, known by the brand name Cupra, was created in 2018. Cupra is the high-performance wing of Spanish car manufacturer SEAT. Ostensibly offering up to a roaring 429bhp, what does the Cupra UrbanRebel offer for the everyday, non-track driver? We look at the knowledge we have so far...

The UrbanRebel production version is due to reach showrooms in 2025, so the latest, super-sport iteration of this model is perhaps not the one to judge what will arrive in 2025. However, don’t be thrown off by the drama of the enormous rear wing and sport-centred front splitter and bumper. Remove these and the overall shape hints at the way in which Cupra’s designers plan to build upon the all-electric platform for this small car.

SEAT’s radical all-electric concept is our first glimpse into Cupra’s plans for their entry-level urban model and tells us lots about what is to come. For a start, the projected price range is £17,000 to £22,000. Quite a lot less than plenty of pioneering EVs, although the Cupra UrbanRebel is likely to start off closer to £20,000. 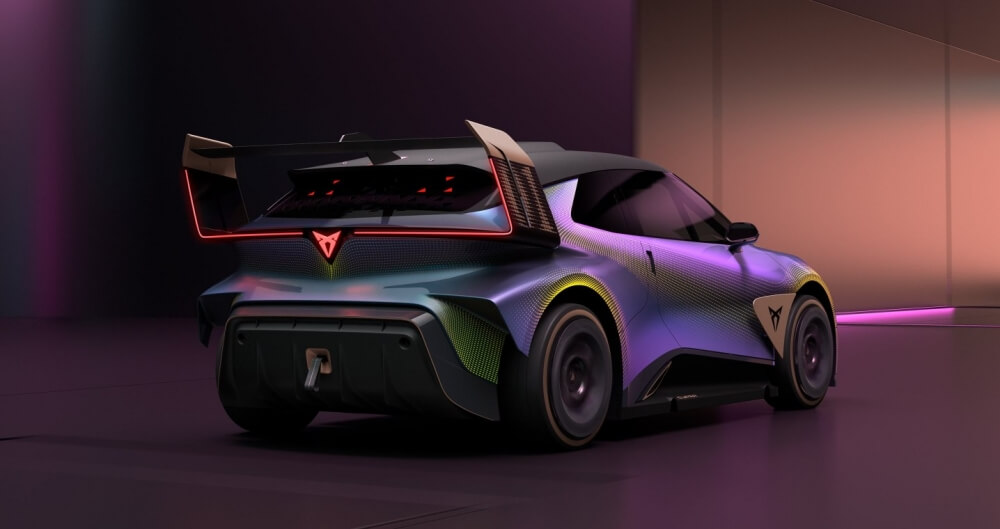 Interested in electric vehicles but don't think the Cupra UrbanRebel is for you? No worries... Meet The All-New Kia EV6 - Long Range & Ultra-Fast Charging.

SEAT is pioneering the development of the all-electric side of things for the wider Volkswagen Group it forms a part of. The Cupra UrbanRebel promises to use a modified version of the VW Group’s MEB platform (Modularer E-Antriebs-Baukasten, which translates as Modular Electric-drive Toolkit).

The MEB is the matrix upon which the electric vehicles of the future are being developed. These are all-electric EVs designed to reach 500-kilometre ranges or higher. The MEB platform intends to revolutionise electric cars, and indeed driving in general, allowing their designers to cast aside the formula created for fossil fuel-run vehicles and allow for fundamental changes in design, both inside and out, as well as VW’s powertrain.

It’s hard to predict how the super-sport element will trickle down into the commercial drive models available from 2021. Cupra claims UrbanRebel can produce 429bhp speed injections for short periods - enough to allow for a 3.2 second 0-62mph time. The majority of the time it will sit at a still-respectable 335bhp. The cars of 2025 are likely to see this toned down to nearer 200bhp and a single electric motor.

Similarly to the performance, it’s hard to tell what elements will remain through the 2025 release. It seems unlikely that the UrbanRebel’s three-door configuration will remain, for example, given buyer trends for five-door vehicles. The trends of vehicle interiors are always changing but at the end of the day it's all about personal preference and opinions, for example we have our very own list of 7 of the Best Vehicle Interiors.

This dramatic design is the first iteration of the cars which promise to lead VW’s vanguard toward the production of more affordable electric cars.

The show car, which will be unveiled in the ‘flesh’ at Munich Motor Show, is being introduced as a motorsport model. A low, short bonnet and very short front overhang are all profound design changes enabled by electric power - there’s no need to accommodate an ICE (internal combustion engine).

You might notice similarities with the brand’s upcoming model Tavascan - especially in the front-end, but also with the wraparound screen and ‘floating’ roof graphic that both models look to share. Cupra also claims that the strong shoulders above the rear wheel arches are inspired by the Formentor SUV, another previous model.

SEAT is leading the charge for the VW Group when it comes to more affordable electric vehicles. The MEB Entry platform is designed to fit vehicles of around four metres - around a supermini size - and the UrbanRebel fulfils this, sitting 5cm shorter than the current model the SEAT Arona.

The new EVs that the UrbanRebel ushers in for the VW Group will make driving electric more accessible to all, according to SEAT and Cupra’s CEO Wayne Griffiths. The Volkswagen Group is aiming to produce more than 500,000 per year in the brand’s plant in Martorell, Spain. It’s significant that the model is being released as a Cupra - SEAT’s sports wing - because SEAT as yet offers no electric vehicles. With many markets looking at a full-on ban on internal combustion engines by the end of the decade, SEAT needs an EV plan - and this initiates it.

The UrbanRebel is likely to go up against the new Fiat 500, the upcoming VW ID.1 and Hyundai’s proposed 2023 model.

With bursts of up to 429bhp, as mentioned above, the dynamic model set to be unveiled at Munich Motor Show is going to be a gutsy, aggressive, sports drive - very much living up to the Cupra label. Likely to be sat on a dual motor, too, we’d expect a tamer version when the model is released in 2025. The roofline sits low too - probably due to aggressive lowered suspension, which might also be lost in the updates.

Although there’s plenty more to learn about the version of the UrbanRebel likely to be available to mass audiences from 2025, this super-sports model gives us a tempting glimpse into SEAT and the broader VW Group’s plans for affordable all-electric cars, coming to market over the next few years - and certainly looks likely to give them a play at a big EV market share.

If an electric car is on the horizon for you next, why not talk to us about electric car leasing now? Our agents can answer all of your questions, and help you find out what the right option is for you. Request a callback today!