A champion of premium German engineering, Mercedes-Benz is synonymous with providing the automotive market with luxury passenger and commercial vehicles. Their high calibre cars are renowned for their performance and prestige, delivering much-loved manufacturing since their inception in the mid-1920s.

With their origins linked to the first self-propelled vehicle using an internal combustion engine, they’ve come quite some way in the new millennium. Debuting at the 2018 Paris Motor Show and moving into production in 2019, Mercedes-Benz introduced their fully-electric compact luxury SUV to the world. Boasting the same refined appeal that Mercedes-Benz has become known for, the EQC is the first member of the manufacturer’s EQ range which is set to expand to include ten models by 2022.

This isn’t Mercedes-Benz's first foray into the electric car market. However, the EQC has a marked difference. This is the brand’s first fully-electric model, meaning there are no petrol or diesel versions on offer. Signifying a shift toward greener motoring, Mercedes’ introduction of the EQC has established the electric vehicle industry is only set to continue growing as luxury brands offer their contributions.

So, how does the EQC rate against its fuel-thirsty counterparts?

With manufacturers like Tesla introducing a range of sleek silhouettes as the frontrunners in the electric car market, Mercedes-Benz had a duty to reimagine their non-electric vehicles svelte design to keep pace.

Perhaps most noticeable is that the EQC doesn’t look like some ultra-futuristic car from the space age. Sharing similar proportions to Mercedes’ GLC SUV, it will feel somewhat familiar to drivers despite a wealth of changes both inside and out. 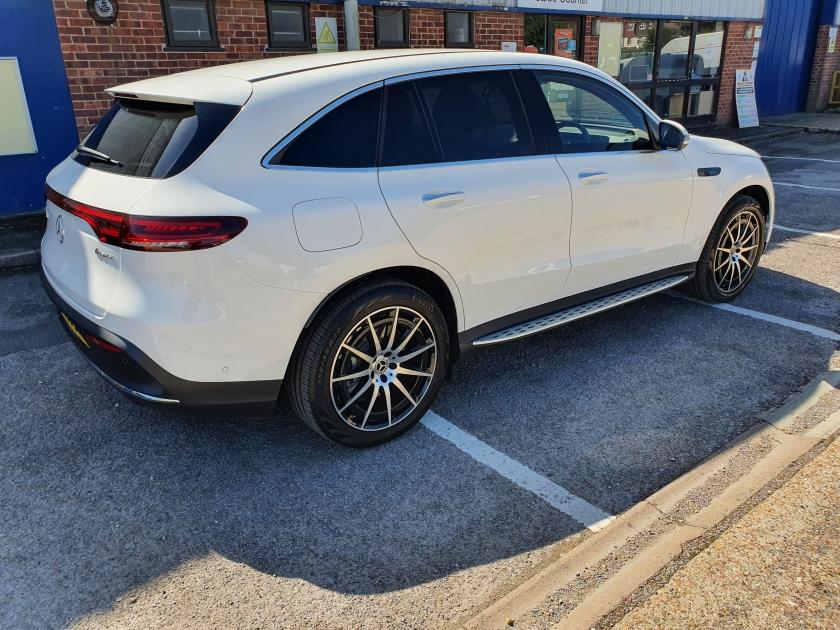 There’s a certain elegance about the EQC that surpasses that of the rest of Mercedes’ fleet. A sweeping chrome grille extends into two slim headlights in front and new-shape windows meld into a curvy roofline. Although to some, this might still appear much like a generic mid-size SUV.

Mercedes have not disappointed in the delivery of the interior cabin when it comes to the EQC. This feels just as good as it looks. Slide inside and you’re acutely aware you’re sat in a Mercedes-Benz. Premium quality has been maintained with a few enhancements that seem fitting for a car focussed on the future of driving.

Square air vents replace the turbine-like round alternatives we’ve grown used to in the Mercedes range and neon blue detailing is featured throughout. Impressive tech has found a home within the EQC too. The silence creates space to enjoy the Burmester HiFi system and drivers will love the fantastic heads-up display. 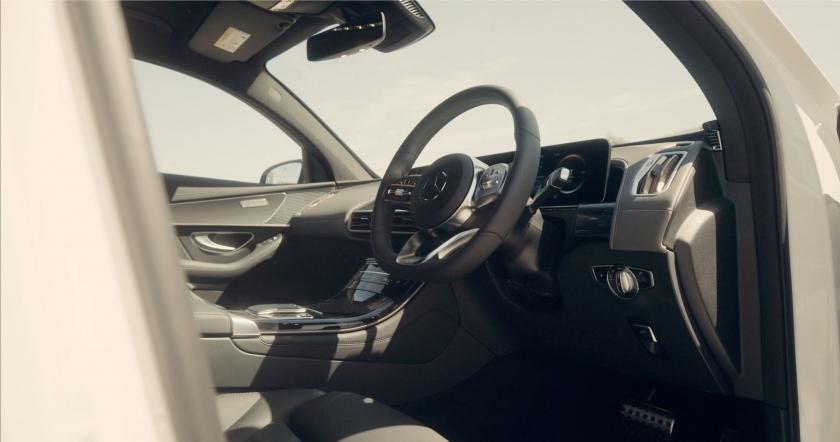 As expected with an SUV, drivers will also find themselves in a lofty position to give good visibility of what lies ahead. Leather seats and polished metal trims give this cabin the sense of luxury consumers have come to expect from Mercedes.

A common question with electric vehicles is can they match the power and performance dished out by fuel alternatives? With a reputation to go from 0-60mph in five seconds, there’s plenty to get excited about with the EQC. Sitting at nearly 2.2 tonnes, the torque and all-wheel-drive arrangement perform well to disguise the weight of this SUV. A sturdy suspension provides a soft drive, although you’ll still be aware if you find yourself on some particularly bumpy terrain.

Read more: Which fuel is right for me?

Drivers will be pleased with the additional sound deadening which all but completely eliminates tyre and wind noise. So much so it’s one of the quietest electric vehicles available. Handling the EQC is neat and secure, offering a serene driving experience in both urban and countryside settings.

The burning question though with electric cars, is what is their driving range? Claiming up to 259 miles on a full charge, it’s not the leader when it comes to distance. However, with rapid charging available in 40 minutes, this is unlikely to cause too many issues.

How does it compare with its rivals?

Mercedes is facing some fairly tough contenders against the EQC. With more big players entering the electric car market, competition is growing and giving consumers greater choice than ever. While its mileage falls short of the distances managed by the Tesla Model X, Audi E-Tron and Jaguar I-Pace, it still offers a suitable range between charges, especially if you’re driving is primarily urban.

The load space is also smaller than the aforementioned competitors, but at 500-litre capacity, there’s nothing to be shy about the room in the boot. The cabin is also noticeably spacious but doesn’t feel devoid of personality, with a sense of cosiness with the interior fit-out.

Read more: What to Consider When Switching to an Electric Vehicle

If you’re looking for a fun drive, you’ll find the I-Pace more enjoyable due to the additional weight the EQC is carrying. Mercedes-Benz opted not to design a frame from scratch for their first fully-electric SUV which the manufacturer says has it carrying roughly an additional 150kg than if they had created an entirely new concept instead of adopting from its current fuel-based models. However, if you’re looking for a calm and comfortable driving experience this is a very good choice.

Watch Jack the Lad from More Radio's review of the EQC:

As Mercedes-Benz dip their toes into the waters of fully-electric alternatives, they’ve remained cautious by borrowing from their petrol-based GLC model. The appeal of the EQC is that this feels a lot like a normal car but with far better green credentials. While Mercedes isn’t setting the benchmark for electric vehicles with their slower start off the blocks than others in the industry, they’ve successfully managed to deliver a fully-electric compact SUV.

Cheaper than many of its rivals with impressive specs, its edging eco-conscious solutions closer to the mainstream. A quality electric car that exceeds its rivals when it comes to comfort and sophistication, the EQC is a brilliant all-electric entry from Mercedes-Benz.

If you are interested in leasing, and would like some help finding the best car for you, give our expert team a call on 01273 433480, or request a callback at a time that suits you.