The future of driving is exciting and full of possibilities. It’s wondrous and almost completely foreign in a way that intrigues driving enthusiasts everywhere. The visionaries at Mercedes-Benz are preparing the world for what the future of luxury electric cars might look like. With the Vision EQS the question on the tip of everyone’s tongue; is it still a car?

A champion of premium German engineering, Mercedes-Benz are synonymous with providing the automotive market with luxury passenger and commercial vehicles. Their high calibre cars are renowned for their performance and prestige, delivering much-loved manufacturing since their inception in the mid-1920s.

With their origins linked to the first self-propelled vehicle using an internal combustion engine, they’ve come quite some way in the new millennium. Debuting at the 2018 Paris Motor Show and moving into production in 2019, Mercedes-Benz introduced their first fully-electric car to the world in the form of a compact luxury SUV. Boasting the same refined appeal that Mercedes-Benz has become known for, the EQC was the first member of the manufacturer’s EQ range which is set to expand to include 10 models by 2022.

Now, as their line of fully-electric vehicles continues to grow, Mercedes-Benz has unveiled their newest prodigy, the Vision EQS. While the manufacturer’s other fully-electric vehicles, the EQC and EQV, feel very much like the Mercedes we’ve become so familiar with, the Vision EQS is a creation seemingly plucked straight out of a sci-fi film set some 50 years from now.

This is a car that stands to set a new benchmark not only for the German automotive brand but the electric car industry as a whole. Mercedes have completely reimagined the scope of what makes a car, a car and crafted something so beautiful and positively elegant that it shatters our expectations of what is possible within the realm of electric engineering.

Unmistakably futuristic, inside and out

Boasting more than just green credentials, the Vision EQS is luxury motoring at its finest. Its sleek silhouette is unmistakably futuristic. The interior feels like a car-helicopter hybrid and we’re sure the neon blue lighting belongs somewhere on the set of Tron. This is Mercedes creating their own space in the electric car sector with a purpose-built platform.

While the Vision EQS is intrinsically tied to the Mercedes-Benz S Class range, this is a model reimagined. With the S Class traditionally forming Mercedes’ limousine range as their home field, the Vision EQS feels wondrously futuristic. On first glance, you’d be forgiven for questioning whether this is a coupe, sedan or limousine. However, once you slide inside, the plush interior of the spacious cabin makes it clear, this is, in fact, a limousine.

There’s also an undeniable sophistication exuded from the Vision EQS. Fast lines create a certain sportiness we’ve not seen in the so-far released electric models from Mercedes. Illusions help to make it appear as though this car sits lower than it does, adding to the sleekness of the overall design.

The concept of a dashboard as we know it has been dismantled and replaced with a white surface where information and graphics are projected and the steering wheel has done away with the traditional round device we’re used to. However, these sleek and dynamic details aren’t confined to the interior. The front grille is a screen and holographic headlamps light the way. 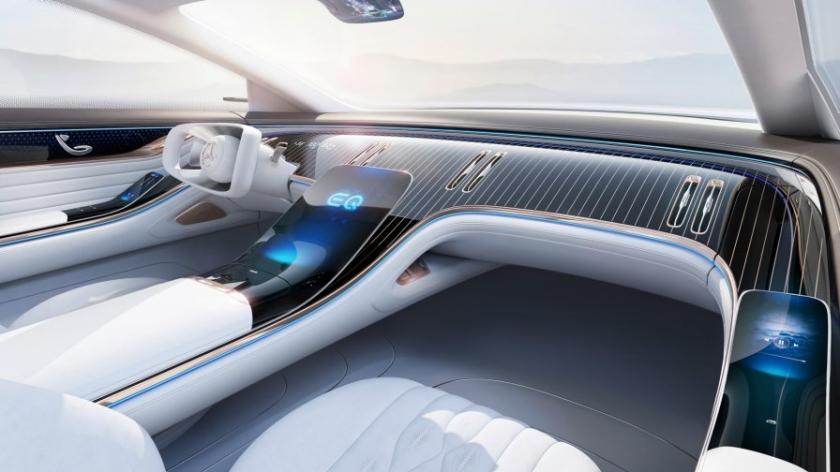 Mirrors have also been removed, replaced by camera systems and a narrow, aerodynamic slice design. The so-called ‘greenhouse’ as it has been affectionately named by Mercedes, is a stylish glass casing around the cabin that blends seamlessly into the body. The Vision EQS is an example of sustainable, modern luxury.

And the drive? This still very much feels like a car. Acceleration is exciting and the exhilaration is all the more impressive thanks to the not-from-this-era modelling.

While Tesla once paved the way for electric cars, they’re now finding themselves up against tough competition as traditional combustion engine manufacturers are cashing in on the shift toward greener living. Mercedes-Benz is committed to delivering on those expectations too, with their EQ hybrid and fully-electric fleet continually expanding.

With ambitions to eventually move to a fully recycled car, reduction and sustainability are at the forefront with their innovative thinking to enhance the electric driving experience.

Read more: What to consider when switching to an electric vehicle

The Vision EQS is making electric sexy and exciting - their own words! But we certainly have to agree this Vision EQS has us excited for what the future of driving holds. And while the concept car hasn’t quite materialised in the way some might hope, the planned release model is still full of brilliant, futuristic inclusions. Mercedes has taken what is technically possible for a commercially suitable vehicle and included it in the EQS that is set to hit the road within the next two years, hopefully.

With eco-conscious decisions being made by drivers across the globe, it’s hard to deny the demand for a shift in the way we operate on the roads. A glimpse into what the future of driving holds is electrifying - literally. While we await the delivery of the much-anticipated release of the EQS, Mercedes-Benz is keeping us engaged with their already available fully-electric models, the EQC and recently released EQV.

Bold, daring and superbly sophisticated, the future of driving with Mercedes-Benz is bursting with the possibility of creating a car that exceeds the bounds of what was once thought achievable. With industry-leading technology and an economically admirable alternative to petrol-guzzling models, electric is the future of driving.