The True Cost of Car Mods

Rivervale Leasing investigated insurance prices of the UK’s 10 bestselling cars to see how much our premiums hike, thanks to car mods.

We analysed 10 types of aftermarket mods to find out how they affect our insurance costs. These types of mods can only be added to the car after it’s in your possession.

Our findings show that these car mods increase the average British driver’s policy by a huge 81% – but which mod causes the biggest price hike?

Explore our findings below to find out which car mod you need to avoid if you want to keep your premium down. 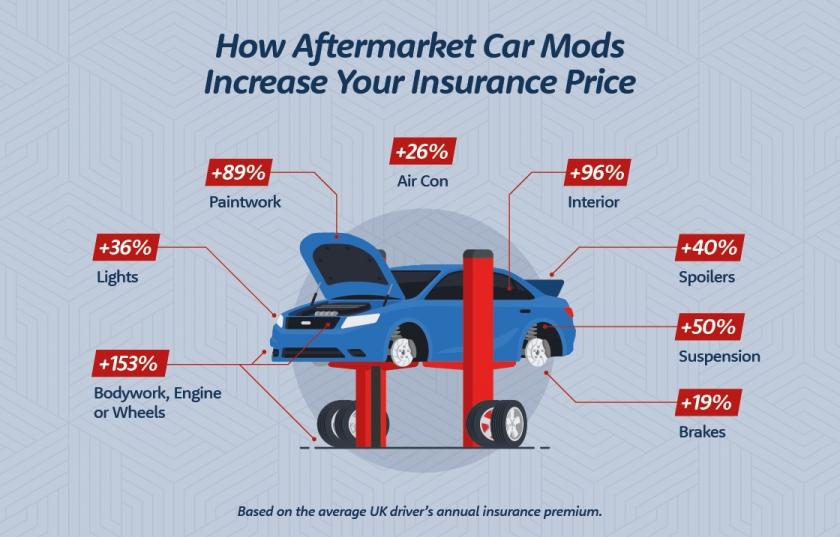 Our study shows that bodywork and engine mods are the most expensive, increasing policies by an average of 153%. That means if your policy was £500 a year, you would actually pay £1,265. So, if you were planning on supercharging your engine, think again.
Even aftermarket safety mods hugely increase insurance prices, as bodywork adjustments like strengthening brackets and fibre glass panels are shown to bump up your premium, also by 153%.

Our investigation shows that adjustments to your wheels will put up your policy cost as much as bodywork or engine changes. Drivers who are considering changing their alloys or trims could be affected by a shocking 153% price hike, on average.

Drivers who advertise their business on their vehicle could also be seriously affected by modified insurance costs. We found that changes to the paintwork, including decals, increased premiums by an average of 89%. Therefore, if your policy was £500 a year, you’d pay £945 just for adding a brand name to your vehicle.

Even the smallest of aftermarket modifications can impact your insurance premium. Our investigation found that by simply adding air con to your car, your policy would go up by 26%, on average.

Which car is affected by mods the most?

We compared the UK’s top 10 bestselling cars to see which one is affected by car mods the most. If your car’s a British favourite, see how much your premium could increase if you alter your vehicle. 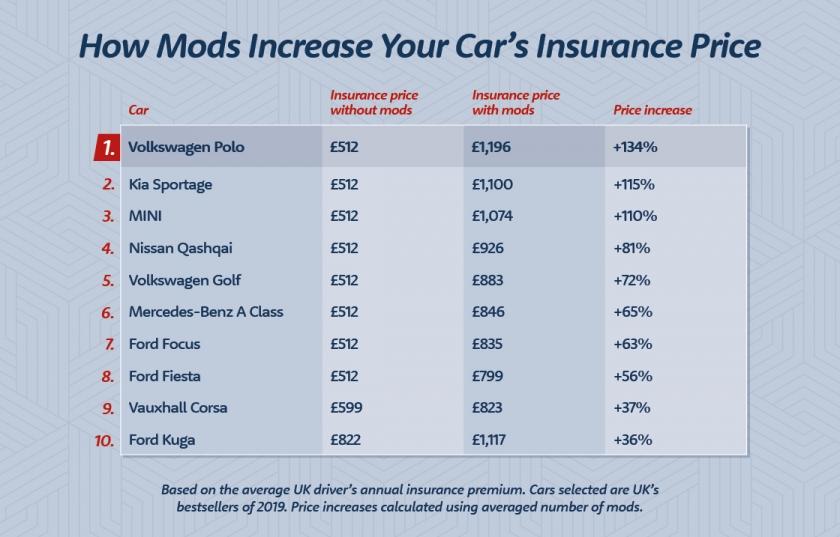 Out of the UK’s 10 most popular cars, our data uncovered the Volkswagen Polo as the most expensive to insure after modifications. The average policy price with car mods jumped up by 134% for the VW, closely followed by the Kia Sportage at 115%.

If you drive one of Britain’s bestselling cars and want to make some alterations, the Ford Kuga has the smallest price hike. On average, your policy would increase by 36% with car mods, which is still a lot, but not as pricey as some vehicles.
But our data also showed that the Ford Kuga is the most expensive bestseller to insure.

Instead, you can bring costs down with a Vauxhall Corsa. We found that modifying this car would bump up your premium by 37%, making it cheaper than the Kuga overall. Although it’s expensive to insure modified cars, you can’t avoid it. Not declaring your adjustments could land you a hefty fine or even a ban.

An undeclared car mod could void your insurance policy, which would result in a penalty of £300 and six points on your licence. If it goes to court, you’ll receive a ban and an unlimited fine for driving without valid insurance.

Here are the most common popular mods – do you have any of them on your car? Don’t forget to declare them so you don’t invalidate your insurance policy. 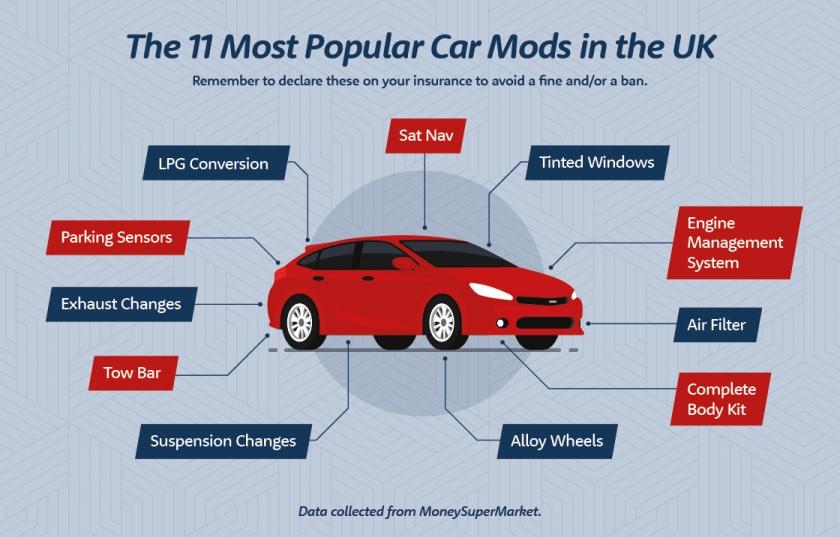 New drivers are more likely to be disqualified with car mods

If you’re a new driver, your licence will be cancelled if you receive six points within the first two years of passing your test. That means if you were caught with invalid insurance, you would need to take your test again. Why does this matter for car mods? The average age to pass your test in the UK is 23. As a previous study has showed that 20-24 year old drivers are most likely to have a modified vehicle, new drivers are at a greater risk of being disqualified, if they don’t declare it.

Illegal car mods that you need to avoid

It’s not just undeclared mods that you need to be aware of. Here are seven illegal car mods which you shouldn’t be able to get insurance for at all, as they’re deemed unacceptable under the Road Traffic Act.

1. Tinted windows
Front car windows need to allow a minimum of 70% light through. If your windows are darker than this, your vision is heavily reduced, which could cause an accident.

2. Blue lights
Only emergency service vehicles should have blue lights. You’ll be issued with a Fixed Penalty Notice if you’re caught driving with blue lights on display.

3. Large spoilers
If your spoilers are too big and obstruct your view, they could be illegal. Spoilers are also banned from the roads if they’re too sharp.

4. Performance exhausts
Big bore exhausts increase the sound of your exhaust, which can make your car too loud for public roads. Stay aware from this performance mod if you don’t want to risk a court fine.

5. Number plates
If your number plate misleads other drivers or is hard to see, you’d receive a Fixed Penalty Notice and the DVLA would be informed.

6. Altered tyres
If your tyres are modified beyond the accepted Road Vehicles Regulations 1986 legislation, your insurance would be invalid, meaning you’d be driving illegally.

7. Subwoofers
By adding a subwoofer to your car’s stereo, your music will likely be too loud. Like performance exhausts, this is seen as a public nuisance and is illegal.

8. Modified lights
UK law states that front-facing lights should always be white or yellow, while rear lights must be red. If you change your lights to the wrong colour, you could face a court fine.

If you are thinking about modifying your vehicle, see how you can bring costs down and learn which are the cheapest cars to insure.

Or you can read our top tips for reducing your premium in our complete guide to car insurance.

Remember, if you lease a brand-new vehicle, you won’t be able to add aftermarket mods. But you can choose from a range of options, from the paintwork to the interior, before your deal starts.

For more car news and entertainment, check out the Rivervale Leasing blog.