Range anxiety has certainly made the move to electric a real ‘no go’ for lots of drivers. Despite the fact that many manufacturers have proven that UK drivers average around 20 miles per day, many of us balk at the idea of having to stop en route to our destination for a recharge when undertaking a long journey.

That’s why expanding the battery capacity and therefore the range of their electric models has been a real priority for so many manufacturers. The piece below lists the electric cars’ range not based on the manufacturer’s purported ranges but actually based on the Worldwide Harmonised Light Vehicle Test Procedure (WLTP). Enforced in 2018, this is based on real-world driving data, so is a real representation of on-road performance for drivers.

Below we list some of the longest range electric cars available on the market today. In the coming year, we’re excited for the launch of the Mercedes Benz EQS (offering a purported range of 478 miles) and the EQE from the same brand, as well as the Ford Mustang Mach-E (with an offered 379 miles of range, and lots to live up to under the ‘Mustang’ name)!

Tesla has long been a go-to electric car manufacturer, both for its early investment in electric tech and also for its investment in nationally-available Tesla quick-charge stations. The luxury brand is renowned for pioneering electric models and has been for the past two decades.

The Model S is Tesla’s longest-running available model and has an amazing range of 405 miles (for the Long Range AWD specification of the Model S). To fully charge a Model S on a 3-pin, at-home, plug-in charger will take a horrifying 1.5 days. But a wall-mounted Tesla at-home charger cuts that time to around 14 hours, and Tesla’s 120kW Superchargers can inject a massive 80% of the battery charge in only just over 40 minutes.

As well as this range, the Model S also offers an impressive 0-60mph rate of 3.1 seconds, and a top speed of 155mph. No wonder the Tesla Model S was, arguably, the best high-end EV car (as of October 2020)! Tesla is renowned for coming in at the high-end of the market price-wise, so leasing might be the best way to allow you to be able to drive a Tesla. 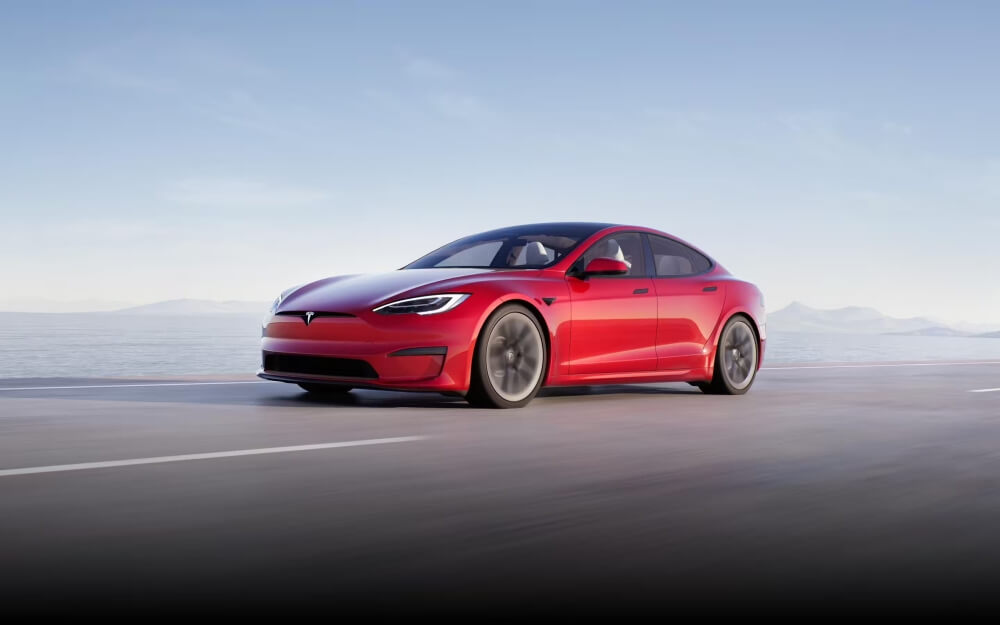 The new BMW iX is set to offer up 380 miles on a full battery. With the xDrive40 and the xDrive 50 available, the iX with the longest range is the xDrive50 M Sport plus the Ultimate pack, which offers several other extras such as surround sound, ventilated front seats and a panoramic sunroof. The M Sport Ultimate delivers impressive 0-60mph acceleration in 4.6 seconds, a powerful 523bhp, and a top speed of 124mph.

The 5th generation, cutting-edge tech that powers the iX is BMW’s eDrive technology. A fully electric all-wheel-drive system makes this ‘Sports Activity Vehicle’ a great option for both range and adventure. The lower-spec xDrive40 offers the same top speed, with a lower range - 257 miles - and a 0-60 mph figure of 6.1 seconds. Continue here to read how Rivervale reviews the BMW iX!

Coming into the list again, Tesla dominates the range-busting electrics. The Model 3 is the cheapest Tesla, but still proffers a range of 360 miles, for the Standard Range Plus spec. The three specs available are Performance, Long Range AWD and Standard Plus.

Long Range and Performance are both Dual Motor All-Wheel Drives, whilst the Standard Plus uses just a single electric motor, powering the rear wheels. The Performance model alone offers a shorter range of 352 miles but reaches 0-62mph in only 3.1 seconds, so provides a little more oomph and acceleration if that’s your priority.

Tesla are renowned for their luxury feel, so both specs feel generous internally! Both the Standard Plus and the Premium interior are available in both the Long Range and Performance models. These specs include heated seats in front and rear, an audio system with 14 speakers, a year-long Tesla connectivity subscription and extras like exterior fog lights and interior floor mats.

A Model 3 will take around 30 hours to reach a full charge from a household three-pin socket - but Tesla are renowned for their rapid charging stations, and even without these there are quicker charging options domestically. On top of this, the Government have been incentivising drivers to look towards electric vehicles. Here you will find an update on Grants & Schemes for EV drivers.

A Tesla rapid charger (there are 624 of these across the UK) will bring you back to full charge in an impressive 15-20 minutes, whilst the Level 2 home charger that Tesla recommends for home use will mean that a full charge will take 8-12 hours. 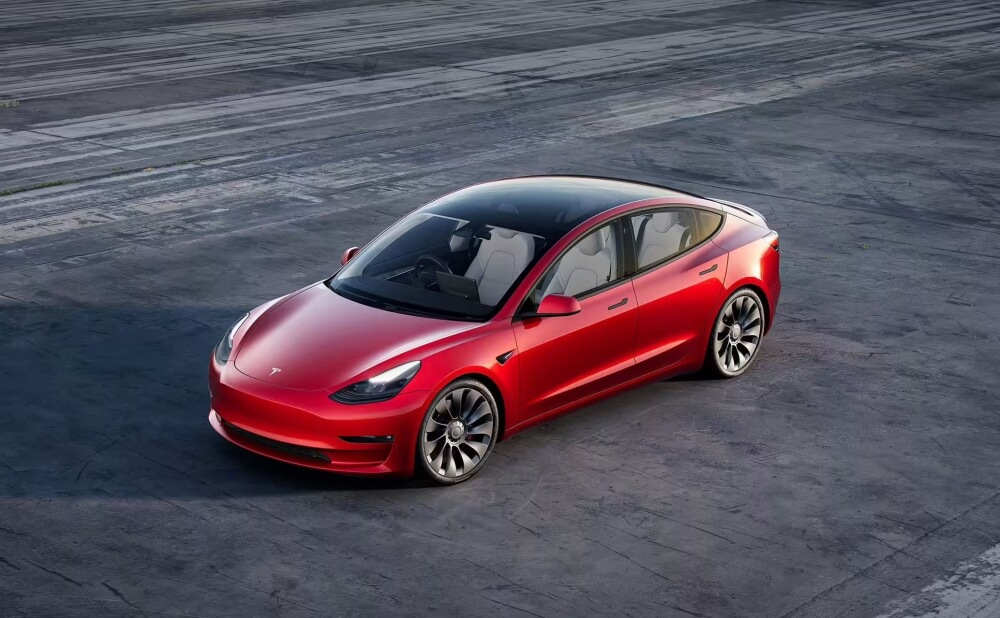 We know, we know, yet again it’s a Tesla! The Model X was the first electric SUV/Crossover from the famous electric brand, but the looks emulate a Crossover as much as an SUV. With the same specs offered as in the Model S, it’s the Long-Range option that delivers the biggest range.

As well as 360 miles on a full battery, the Long-Range Model X reaches 0-60mph in a zippy 3.8 seconds - that makes the Model X one of the fastest accelerating SUVs in the world! This AWD has two motors, on both front and rear wheels, and has a top speed of 155mph. This is one of the fastest EV cars, which we included in our fastest Electric cars to lease blog.

The top of the range Plaid model focuses on performance, so range takes a little bit of a hit here, coming down to a still very respectable 340 miles on a full charge. That’s pretty impressive for a model that reaches 0-60 mph in 2.5 seconds and has a 163 mph top speed! The Model X is quite flexible, too. Although five doors are standard, you can add additional seats to make a six or seven seater. 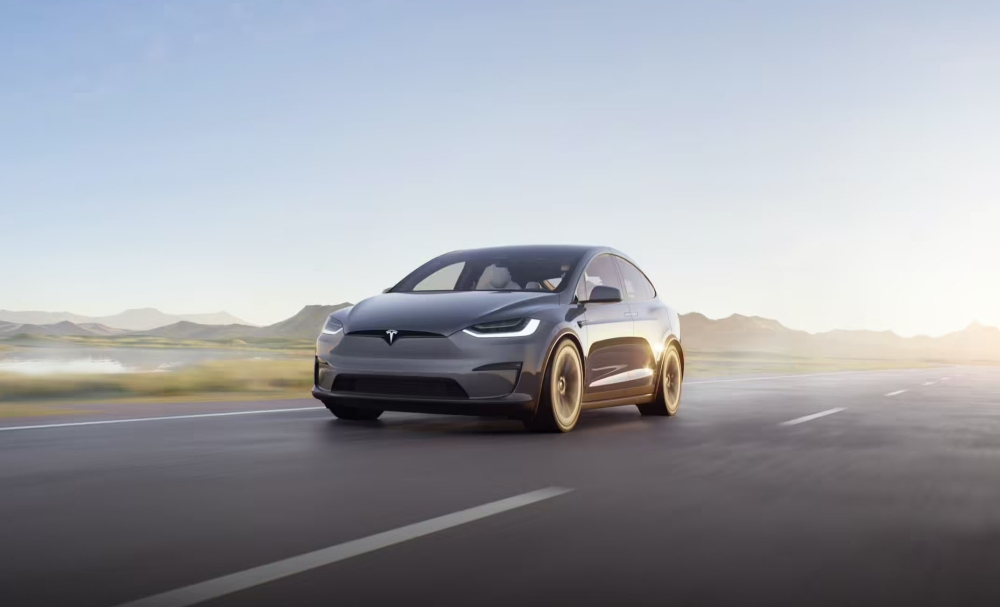 Available in three specs, the BMW i4 Gran Coupe offers us the longest range in Tech Pack I4 spec, at 352 miles. To maximise range, opt for the eDrive40 M Sport. This offers 340bhp and a respectable 0-62mph figure of 5.7 seconds. It will feel zoomy compared to any ICE (internal combustion engine) counterparts. The eDrive50 M Sport has more of a performance, sporty focus, with its AWD offering 0-62mph in 3.9 seconds.

The Ultimate again prioritises performance, but range suffers slightly, dropping to 315 miles on a full charge. Both models can pull back 90 miles of range in only 10 minutes (when using a DC fast charger), so even the marginally shorter range shouldn’t give you any cause for concern. 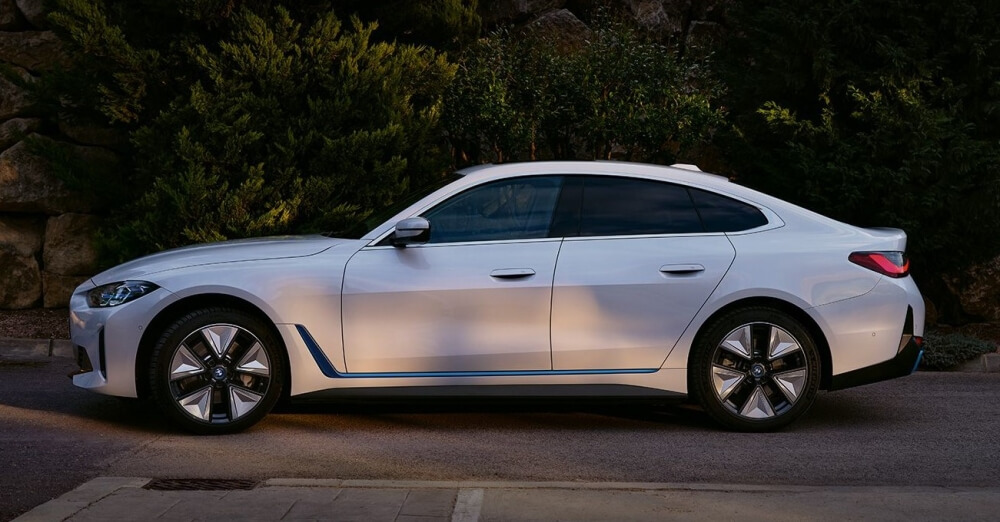 Electric cars are offering better range year on year, so choosing an electric lease has never been such a no-brainer. Get in touch with Rivervale today on 01273 433480 to discuss leasing options. Alternatively, request a callback at a time that suits you.