The Lexus NX300 has had only its second makeover since it was launched in 2014… but how much has it changed since then? Here is everything you need to know about the all-new Lexus NX300h.

What’s new about the engines?

The new NX will no longer be available in a diesel engine. Sorry diesel consumers.

The 2018 NX comes with a four cylinder, 2.5 electric-petrol hybrid engine, producing a combined output of 195 bhp.

For people who spend most of their time driving in congested cities, then the NX is for you! The suspension system is impressive, it’s very comfortable and it’s extremely smooth on the road, with little to no sounds coming from the engines.

One thing that does take away from the driving experience is the fact that when you press on the accelerator whilst in petrol mode, the NX does make a roaring sound which is slightly off putting.

However, if you switch to eco/electric mode, the NX will barely make a sound - quite literally.

What about the exterior?

The outside of the NX might look similar to it’s outgoing predecessor at first glance, but there have been some slight changes to make it look more meaner, more aggressive, which will appeal to consumers. The front of the car gets an imposing grille as well as an aggressive front bumper, even larger than before; there are these new LED headlights, which have been resculptered by Lexus.

At the rear, you have these good looking alloy wheels that really stand out. You also get these sculptured fendors, both from the front and the rear, which makes it look even more appealing and aggressive, almost more muscular looking.

3 words that best describe the NX: SUV on steroids.

All in all, the outside of the NX has better proportions, it looks bigger, wider and taller, and it’s more aggressive looking in shape; something that has become a trend in styling in most SUV vehicles.

Like the exterior, the inside the NX gets a more meaner look than the 2014 model, with a big update on tech and the infotainment system. The look and feel is distinctively more modern, with sharp angles and bold slashes of wood and metal across the dash and side doors, it personifies class and style. 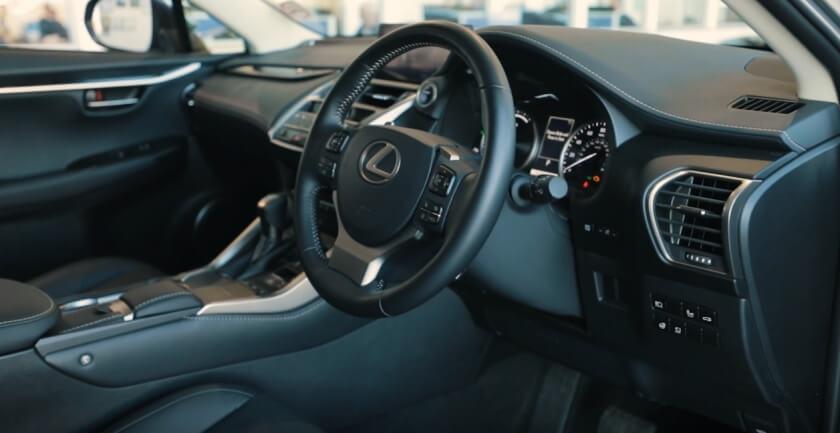 Lexus have replaced the 7-inch centre-dash infotainment system with a much more classier looking, intuitive, and easy to use 10.3 inch monitor, that now comes as standard across the range.

Moving onto the rear of the NX, there is more legroom and headroom for passengers to feel comfortable. You’ll never expect the NX to have as much space as it does in the back, particularly because it takes the format of a smaller SUV/crossover.

The NX300H comes in three different trim levels: the SE, Luxury, F Sport, F Sport Premier Pack and Premier. Standard features for each trim level can be seen as per the table below;

Read More: Which Compact SUV is Best for Me

Overall, I’m really impressed with the NX - it’s a handsome looking car, both from inside and outside; it drives well, particularly in more congested cities; it’s relatively spacious for a small SUV; and the fuel consumption costs are low when you’re cruising around cities and making short commutes. Personally I wouldn’t recommend it for people who are into more sporty vehicles as it’s not ideal car for accelerating fast at a constant speed, but if you do want a car with additional practicality and a higher ride, then it’s well worth going for.

If you would like to know more about the 2018 Lexus NX300H, check out our latest leasing deals and register your interest.