Does Your EV Charger Affect Your House Price?

With the UK firmly on the road to electric, the adoption of electric vehicles (EVs) is steadily on the rise. Over 175,000 EVs were registered in 2020 – the biggest increase to date – and 2021 is expected to break that record.

We surveyed Brits and found one in five won’t switch to an EV because of limited access to a charge point. While you can install one at home, EV chargers cost around £800-£1,000, including labour – a hefty fee to pay upfront. But for some, a home charge point could be linked to the value of your property.

After analysing 1,000 house prices across 50 UK areas, we found that homes with an electric charge point installed sell for 13% more than the local average. With the average UK house price now at £194,000, according to the ONS, that could mean a value increase of £25,220 to your property.

From the 1,000 homes analysed, 76% of UK homes with an EV charger showed an increase in value, when compared to the local average. For the 38 out of 50 areas which saw a positive link between value and home charge points, our analysis showed an increase of £50,595 on average.

Top 10 areas where house prices with an EV charger increased 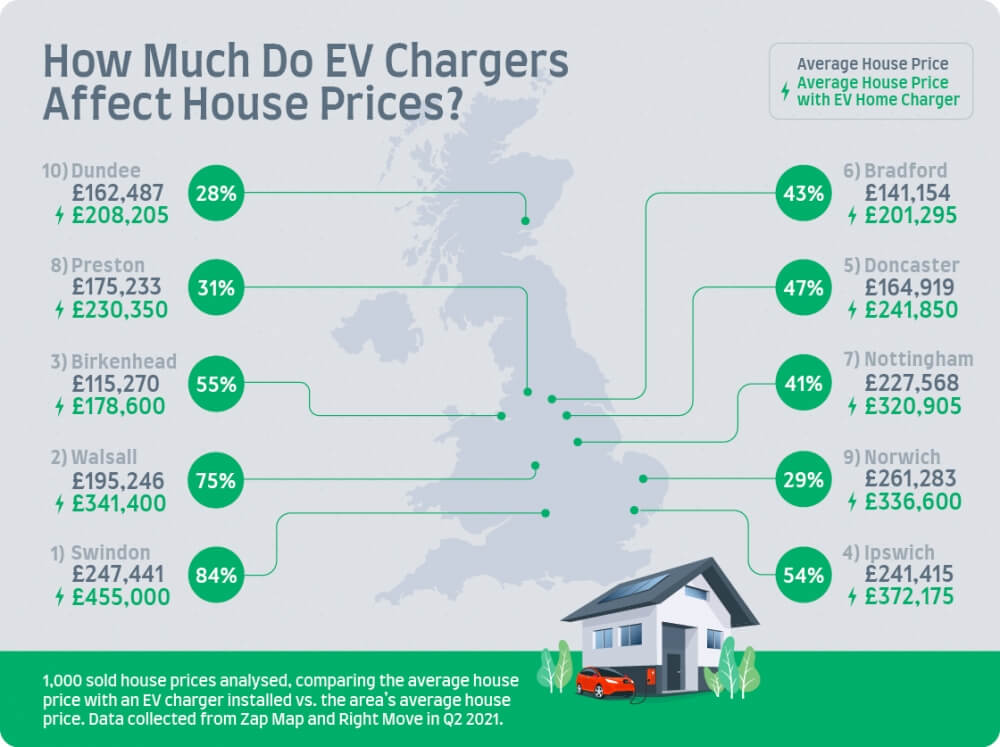 The areas around the UK that saw a positive link between house prices and EV charger installation were largely in England. Swindon takes the top spot, seeing a huge 84% increase to £455,000 when compared to the local average house price of £247,441.

Winners and losers – which house prices increased the least with an EV charger?

Out of the 50 cities surveyed, only one in four (24%) did not see a positive link between house prices with a charger installed and the local average. The average loss was -16% in value. See our winners and losers table below to see which house prices don’t appear to benefit from installing an EV charger. 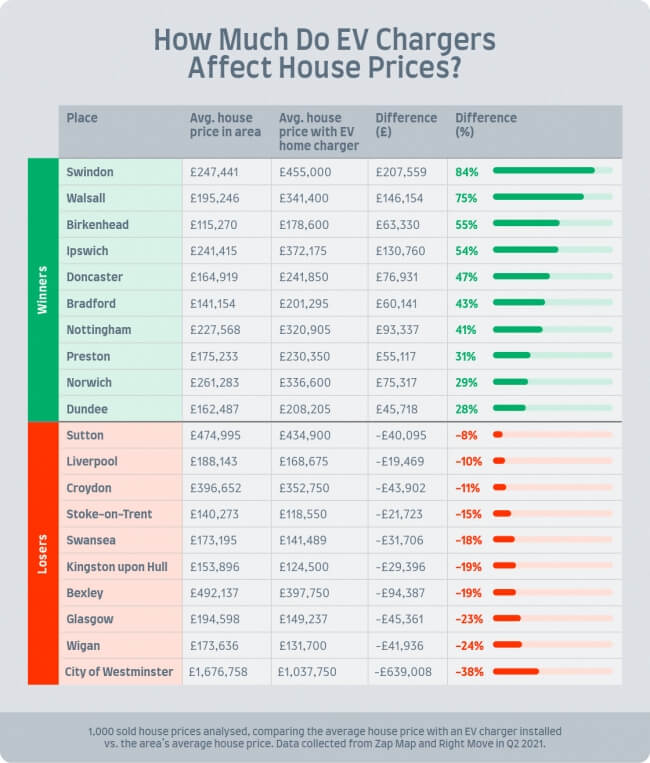 The City of Westminster has the most significant reduction when comparing a home with a charging point to the area’s average. Westminster’s average sale price came out at £1,676,758, however, homes with an EV charger were valued at £1,037,750 – that’s £639,008 less or a -38% reduction. While Londoners might be incentivised to choose electric and avoid the Congestion Charge, car usage is declining in the capital. Private car trips have decreased by 13% since 2003, according to Christina Calderato, the Head of Transport Strategy and Planning at Transport for London. This appears to be linked with more Londoners taking public transport and opting for home deliveries, rather than going out to shop, lessening the need to own a car personally.

This could indicate that EV chargers are valuable to potential homeowners when they’re looking for a new property.

The cost of installing an EV charge point at home (including labour) is around £800-£1,000, with prices increasing for higher-capacity models. It might seem like a lot to pay upfront, but there are ways to keep EV charger costs down. Here are five top tips to save up to £1,850 over a year.

With new-build homes, you could get a free charging point as standard. The government is already taking steps to ensure new builds have an EV charger installed in a bid to bring emissions down.

Why else should you install a charging point?

Installing a charging point in your home isn’t just linked to property value – they’re also much more efficient for charging your EV.

For more automotive updates and research, check out the Rivervale blog, featuring the future of Tesla and how much we really know about EVs.

If you’re looking to cut costs on driving an EV, consider our electric car lease deals, where you can drive your dream EV while making affordable monthly payments. Some of our deals even include a home charger for you to rent, making the switch to electric easier than ever.

We compared 1,000 sold house prices on Right Move to the average local area price over 50 UK areas. House prices were recorded where there is an EV charger installed at that postcode’s address, using Zap-Map, chosen by the properties most recently sold. When recording areas with no charge point installed or any nearby, locations were selected within 10 miles of the houses with a charge point for a fair representation. The findings shown are from our study only and may not represent other experiences.